Mayor Garcetti Says The Driverless Revolution Could Start In Westwood 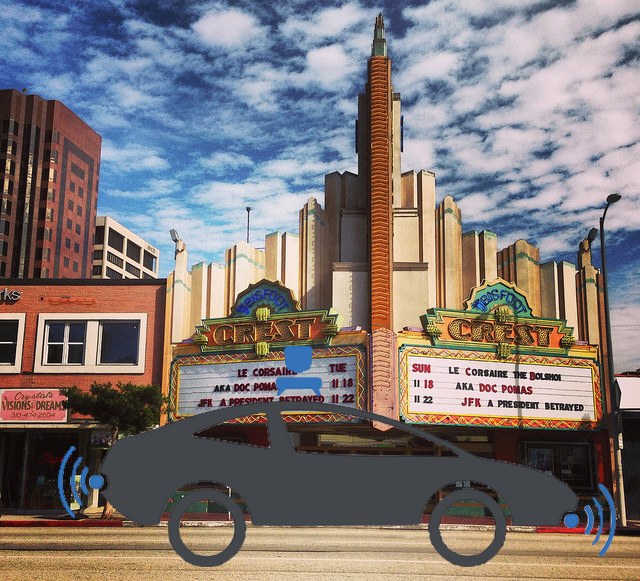 Beep, beep! (Illustration mash-up of this photo by Chris Goldberg via the LAist Featured Photos pool on Flickr and this illustration by Blue Island via Shutterstock)

Speaking at The Atlantic's City Lab, Garcetti said that he wants Los Angeles to be the first city to offer residents rides in driverless cars. He said the city "could be the first place really in an urban center where we have autonomous vehicles that are able to be ordered up [like] a car service, right away in a real neighborhood, not just in a protected area."

He's working on making the future get here a little sooner. Last year, Garcetti spoke at a tech summit and said that he wanted to turn one neighborhood into a driverless car neighborhood. This year he said that he is working with UCLA on that project—and Westwood might be a contender for a driverless hood. The idea is you could call up a car, like Lyft or Uber, but your car wouldn't have a driver, according to the Los Angeles Times.

Garcetti said he's also working with Xerox on a program to streamline transportation options for Angelenos. He wants all of our modes of transportation to be as easy to navigate as, say, ordering pizza:

"Now through a single app, I could order a taxi, an Uber, a Lyft, a Sidecar; I could get on the bus, I could get on the rail, I could take out a shared bike, I could get a shared car like a Zipcar or something like that. And you never have to stress out anymore about how you're going to get some place. You know you have the options.... And maybe the city makes a small transaction fee off of that, or MTA, so it's actually in our interest to build that and then share that open-source again with the rest of the world."

As the city thinks about building its transportation infrastructure, it should plan for the future as well as the present, Garcetti said. That means that today's plans for a rapid bus lane could be tomorrow's lane for autonomous vehicles. He said that while the expansion of rail is "transformative for the car capital," he also wonders how rail fits into this brave, driverless world: "How do you spend billions of dollars on fixed rail when we might not own cars in this city in a decade or a decade and a half?"

Right now the DMV is working on regulations for driverless cars, and California might be the first state to roll them out. And Metro is working to figure out where to put bike kiosks for forthcoming bike share programs (here Southern California is far behind).