Blue Bottle Coffee Has Opened A New Shop In Venice 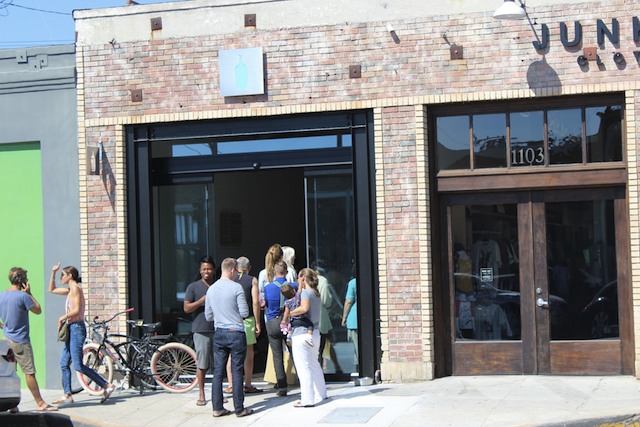 Blue Bottle in Venice (Photo courtesy of MADE PR)

The new digs located at 1103 Abbot Kinney Boulevard will be serving up Blue Bottle's single-origin drip and espresso drinks, and their Dandy espresso that's only available in Los Angeles (including their Arts District location). They'll also have their popular chicory New Orleans Ice Coffee (which we're kind of obsessed with) that you can buy fresh or in their signature milk cartons.

As for grub, they'll have Blue Bottle's cookies as well as baked goods from Brentwood restaurant, Farmshop.

San Francisco-based Jensen Architects designed the space that has a large LED light installation on the wall that has colors fade in and out in the same vein as artist James Turrell's work. We're talking about the lights fading in around 6:05 a.m. when the employees start their day and fading out around 7 p.m. when the sun is setting. Well, you've got our attention.

This is part of Blue Bottle's expansion into the L.A. market. They announced in April that they were taking over Arts District's Handsome Coffee Roasters, and the brick and mortar fully transitioned into a Blue Bottle in July. Blue Bottle is expecting to open another L.A. shop in Culver City in 2015.