23 Of Our Favorite Events In Los Angeles This Week

There are a number of great events happening in L.A. this week. And here are 23 of them for you to choose from. Read on for all the details...and we’ll be back on Thursday to help you plan the weekend.

NOIR FILM: The UCLA Film and Television Archive continues its Exile Noir series on Monday night with a double feature beginning at 7:30 pm with Chicago Calling (1952), in which a struggling alcoholic (Dan Duryea) tries to get money to touch with his estranged family. It's followed by Barbara Stanwyck in Sorry, Wrong Number (1948). In the film she plays a sickly socialite who tries to warn a crime victim after overhearing a murder plot on the phone. Tickets: $10.

SOCIAL MEDIA WEEK: Social Media Week returns to L.A., this time taking over the Broad Stage in Santa Monica as its home base. The conference offers a slew of workshops, panel discussions, interviews, info sessions and a chance to network with some of the best and brightest communications / social media minds working today. Many of the sessions this week are free, but passes ($110-$300) guarantee you entrance.

NIGHT RUNNING: To celebrate World Car Free Day the Los Angeles Tourism & Convention Board presents its latest self-guided itinerary, Discover Street Art Car Free (as part of its eco-tourism initiative, Car Free L.A). Street art fan and BlacklistLA running club founder, Erik Valiente, has curated a foot friendly exploration of some of L.A.'s notable murals. The BlacklistLA club invites runners to join in the festivities on Monday night for a run at 10 pm. Meet at the Urban Light installation in front of LACMA on Wilshire a little before 10 pm to join in the fun. Free.

INDIE FILM: On Monday at 8:30 pm, REDCAT presents the program The Seen and Unseen: New Films by Rebecca Baron and Adele Horne. The independent filmmakers' latest works offer "distinctive takes on how photographic records reveal what may otherwise elude the immediate senses-the hidden, the unseen." REDCAT screens Baron's Detour De Force (2014, 29 min., DCP) that explores "thoughtographer" Ted Serios, a Chicago bellhop who "specialized in generating Polaroid images by force of mind alone." Horne debuts In Common (2014, 19 min., 16mm), a "sensuous chronicle of a small urban garden on a vacant L.A. hillside, as seen throughout the cycles of days and seasons-the counterpoint of the different tempos of life." Tickets: $11 [members $8].

STORYTELLING The Moth presents the special program You are Here: Stories of Rights and Lefts on Tuesday at Club Nokia in DTLA. Hosted by Lynn Ferguson, the evening features stories on the theme by Cybele Abbett, Dori Bonner, Roy Choi, Jay Martel and Duff McKagan. Music by Andrew Baker. Doors open at 7 pm and the show begins at 8:30 pm. Tickets: $25-$49.50.

Flying Lotus - You're Dead! from Warp Records on Vimeo.

TUMBLR IRL: TUMBLR IRL is a Tumblr event that teams bands with a visual artist(s) to tell the story of their music, and then the bands perform in a setting that's inspired by the art and artist(s). On Tuesday at the Tumblr IRL event at Mack Sennett Studios, the L.A.-based experimental multi-genre rapper Flying Lotus performs new tunes from his upcoming album You’re Dead with visuals by collaborators Shintaro Kago, Strangeloop and Timeboy. The event takes place from 7 to 11 pm and is free with RSVP. There is currently a waitlist for the show.

FILM: Film Independent at LACMA presents a screening of the 1978 martial arts classic The 36th Chamber of Shaolin on Tuesday at 7:30 pm. Directed by Lau Kar-leung, the film stars Gordon Liu and Lo Lieh. The evening includes a conversation with writer/director and Wu-Tang Clan founding member RZA, who'll discuss how the film influenced the production of Enter the Wu-Tang (36 Chambers) and his career as a whole. Tickets: $5-$10.

CHEETAH: The G2 gallery hosts a book signing and fundraiser for the Cheetah Conservation Fund with founder Dr. Laurie Marker, signing and discussing the plight of the animals. A live female cheetah, Johari, will leased and roaming the space with a San Diego Zoo rep. The book’s photographer, Suzi Eszterhas, also exhibits her work at the gallery until Nov. 2 as part of the gallery exhibit, Ricked From the Headlines: A Ranger Rick Photo Expedition.

BOOKS: Banned Books Week is being "celebrated" around the country, and this year the week is focused on comic books. As part of the nation-wide commemoration of books that have been banned, the LA Central Library has invited Captured Aural Phantasy Theater to perform its show about the 1954 Senate hearings that banished many titles from school and library shelves. Tales from the Comic Book Crack Down begins at 7:30 pm on Wednesday and the performance is free, but RSVPs needed.

PING-PONG: On Tuesday actor-activist Susan Sarandon hosts a night of ping-pong at SPiN Standard to benefit My Friend's Place, which helps homeless youth, ages 12-25, build self-sufficient, sustainable lives. For a $10 donation, players can enjoy three hours of unlimited ping-pong (maybe even against Sarandon).

FREE MOVIE: There's a free movie screening of The Great Escape (1963) with Steve McQueen on Wednesday at 7 pm at the Petersen Automotive Museum. It's one of the final screenings before the museum closes for renovations on Oct. 19.

BEER: On Wednesday, actor and uber-geek Wil Wheaton drops by the Stone Brewing Company Store in Pasadena to celebrate LA Beer Week from 7 to 9 p.m. Wheaton, a Stone collaborator, showcases some of his own brews and other Stone collaboration beer. Wheaton exchanges homebrewing tips with fans, and meanwhile, Stone donates a portion of the event proceeds to Pasadena Humane Society, a non-profit organization close to Wheaton’s heart. The beers include: Stone w00tstout 2.0, Drew Curtis/Wil Wheaton/Greg Koch Stone Farking Wheaton w00tstout and 2012 Dogfish Head/Victory/Stone Saison du BUFF (pours only), among others.

FILM: The Catalina Film Festival presents 75 films over five days on Catalina Island from Sept. 24-28. Come for the films and stay for the parties and networking by the water. The festival opens on Wednesday at 6 pm with an evening screening of short and feature films. New this year to the festival, Wes Craven picks the first-ever winner of The Craven Award for excellence in horror filmmaking. Tickets: $15 (single films); day passes: $35-$55 (films only); and 5-day passes for films only $250. VIP passes that include parties are available, too. The festival benefits the Catalina Island Conservancy.

LIT: Skylight Books welcomes author Courtney Moreno who reads from her just-released debut novel In Case of Emergency (McSweeney’s). In the book, rookie EMT Piper Gallagher faces her past as well as the horror she sees in the present, working in South L.A. She also has to deal with the post-traumatic stress of her lover, a woman who served time in Iraq. 7:30 pm. Free. 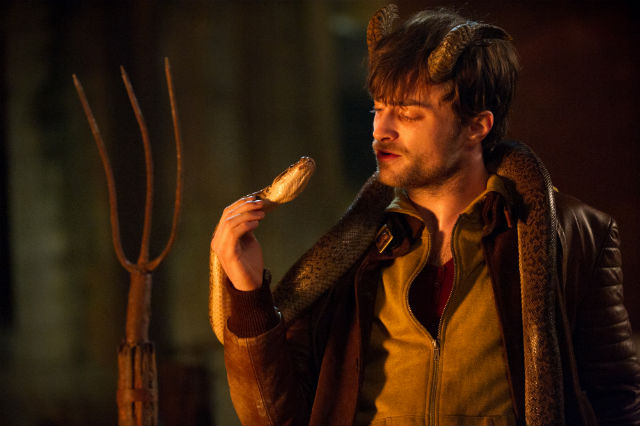 FILM: The American Cinematheque’s horror, sci-fi and fantasy genre celebration Beyond Fest screens 26 films from around the world at the Egyptian (with 15 L.A. premieres) from Sept. 25-Oct. 4. While some events have already sold out to Cinematheque members, there are number of screenings still available (including 11 free films). The Beyond Fest screens Horns on Thursday, with Daniel Radcliffe starring as a man who comes under suspicion after his girlfriend is murdered and "devilish protrusions begin to grow from his forehead." Tickets: $11.

EXPERIMENTAL ANIMATION: On Thursday from 8 pm-midnight, WOAH (We Open Art Houses) and the mobile studio Experimental Half-Hour presents the third LA edition of the Bring Your Own Beamer (BYOB) series. Organizers selected more than 24 LA-based experimental animators, video and sound frequency artists to present work. The event takes place at the DTLA arts complex Werkartz and also include live video synthesis for music performances throughout the night. RSVP mandatory.

FILM: The documentary Fed Up, narrated by Katie Couric, screens at the Aero in Santa Monica on Thursday night at 7:30 pm. The film examines the relationship between the government and the sugar and processed-food industries and how it can be detrimental to our health. A panel discussion follows with KCRW's "Good Food" host Evan Kleiman, the film's director/producer Stephanie Soechtig and other food industry experts. Tickets: $11. Free organic popcorn for all ticketholders, too.

FOOD/BEER: Salt's Cure continues its monthly pig roast partnership with Verdugo Bar and on Thursday, the collaboration celebrates LA Beer Week with the chefs cooking up pulled pork sandwiches, house-made hot links, and grilled ham and cheese to pair with a selection of craft beers. Running from 6-9 pm, both Salt’s Cure’s menu and craft beers from Verdugo’s 22 taps can be enjoyed on the outdoor patio, with food between $5-$8.

FOOD/DRINK: Taste of Pasadena & SIP-tember Finale takes over the Rose Bowl on Thursday. Attendees can vote for their favorite "Sip-tember" cocktail while sampling the goods at a Taste of Pasadena restaurants including Big Mama's Rib Shack, Celestino Ristorante, Du-Par's Pasadena, El Cholo, Green Street Restaurant and many more. The four finalist cocktails will be served up in a live competition from 6-9 pm. Tickets: $30 in advance, $40 at the door.

COFFEE: On Thursday from 3-4:30 pm, Compañía de Café in San Fernando debuts a monthly coffee class (taking place last Thursday of each month and continuing throughout the year). With a limit of six guests at each class, attendees will be taught the art of coffee cupping, sampling coffees from various regions. Tickets are $10 per person for each 90-minute tasting class. To register, call the cafe at 747.500.7102.

MUSIC + FOOD: On Thursday night, the Parlor—a food, wine and music series launches at The Fig House. With a meal prepared by roomforty chef Libry Darusman and wines selected by Jim Knight, owner of The Wine House, to complement the courses, the dinner starts at 7 pm and is followed by an intimate concert by Aimee Mann at 9:30 pm. Tickets are $150 and the seating is limited to 150 guests. Valet Parking will be provided.

COMEDY: Comedy Palace, the free weekly comedy show above a Chinese restaurant in Los Feliz, presents live standup, performances and stories this week from Jon Daly, Kate Berlant, Brandon Wardell and more guests. 9 pm. Free, but get there early for a seat

SCOTCH DINNER: The Tam O’Shanter, one of the oldest restaurants in LA, hosts a fall Scotch dinner event that pairs four courses with single-malt scotches from Glenmorangie Distillery. The spirits include Glenmorangie Nectar D’or (12yr) with octopus, Lastanta (12yr) with a BLT featuring bacon-crusted honeybee gouda, heirloom tomato chutney and arugula, The Original (10yr) with a grilled duck with preserved orange risotto, and finally, Extremely Rare (18yr) with a cardamom cookie sundae with cappuccino ice cream and CC Browns’ hot fudge. The dinner begins at 6:30 pm and the cost is $75 per person. Call the Tam for reservations at (323) 664-0228.