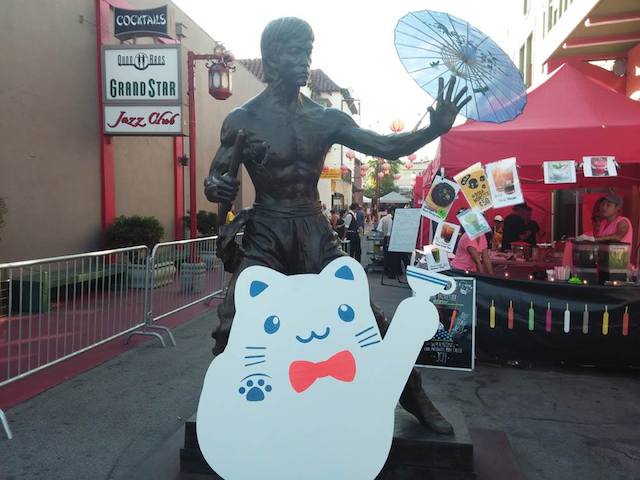 We've been hot on the tail of Los Angeles' first cat cafe, and we can now report that there will be a pop-up cat cafe in Chinatown in less than one month.

Cat cafes are very popular in countries like Japan and Korea, but so far, America has been behind on the trend.

Carlos Wong has been fundraising for Catfe through Kickstarter, with rumors that it might eventually find a home in Little Tokyo in the Japanese Village Plaza next to Mr. Pizza. To sate us, and to kick off a second round of fundraising, Wong is opening a pop-up Catfe in the Far East Plaza in Chinatown on Oct. 2 through Oct. 5, LA Weekly reports.

Wong described a Cat Cafe like a "Starbucks petting zoo with cats" on his Kickstarter, which is pretty accurate. Patrons pay a fee to enter a room full of cats, and they can sip coffee and tea while socializing with them.

This pop-up event is a partnership between Wong and Chinatown BID and Best Friends LA (a no-kill shelter), and it sounds pretty amazing to us. Guests to the cafe will be able to pet cats and interact with costumed maids and butlers. If you fall in love with a furry buddy and are over 18, you can adopt him or her. There will also be a performance by DJs and band Lolita Dark, who are the authors of a song called "Kitty Nyan Nyan" that appears on Wong's Kickstarter.

Interested cat cuddlers are advised to check with Catfe's Facebook for exact times, which should be posted soon.