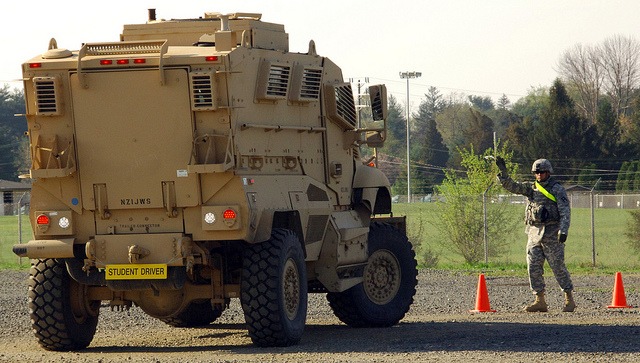 We don't have a photo from the LAUSD, but this is what a Mine Resistant Ambush Protected (MRAP) vehicle looks like (Photo by The National Guard via the Creative Commons on Flickr)

LAUSD has confirmed that they have in their possession three grenade launchers and a tank that were originally created for warfare.

This comes on the heels of a site called MuckRock releasing this information obtained through the Freedom of Information Act (FOIA) last week. (Muck Rock is a national organization that helps people get government records through FOIA and encourages journalists to write about the information.) The L.A. Times reported that the school district received the military equipment through Pentagon’s 1033 program, which gives surplus military items to law enforcement programs—and that includes the law enforcement departments of Ferguson as well as LAUSD's police department.

Though the L.A. Daily News reported that the weapons were never used, the 14-ton, mine resistant and ambush proof (MRAP) vehicle that LAUSD received in June was created for fighting insurgents in Iraq. LAUSD Police Chief Steven Zipperman said the MRAP would be helpful in the case of a large-scale attack, where they would need to save students in case the LAPD and LASD couldn't get to them in time. The San Diego Unified School District's Police Department also received a MRAP.

As for the three grenade launchers that were gifted to the school shortly after 9-11 (because schools are exactly like the setting for films like Predator), they were originally taken by the military to fight in Vietnam. Zipperman told the Daily News that they wouldn't use them to actually shoot grenades, but merely to send out a hail of rubber bullets to disperse crowds if there was any unrest. He told Times that they would never use them against the students.

There's also the 61 full assault M16 rifles the LAUSD police department got that they converted into semi-automatic weapons. Zipperman told the Times that those would be kept in locked compartments in patrol cars, and would be used in cases similar to a mass shooting, like Columbine. Similarly, a school board approved for police at a Compton school to carry semi-automatic AR-15 rifles in the trunks of their patrol cars in the school year that started in August.

“When I hear law enforcement agencies are collecting military weaponry, it makes me think they’re preparing for a war on the streets with young people,” Patrisse Marie Cullors-Brignac, director of nonprofit group Dignity and Power Now, told the Daily News.

Update 9/17, 10:45 p.m.: The L.A. Times reported that LAUSD will be returning the three grenade launchers to the Department of Defense, but they'll be keeping the assault rifles and tank. They said the rifles were "essential life-saving items" and the MRAP vehicle would only be used "under extraordinary circumstances."