Drought Be Damned, Tickets Are On Sale For That Giant Water Slide Downtown 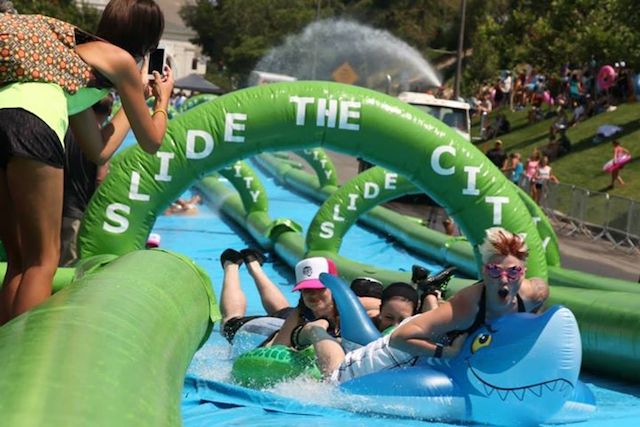 If you weren't questioning whether or not it was appropriate to put a giant water slide in downtown Los Angeles during a drought, you were probably questioning where to get tickets. Well, registration for Slide the City is now open.

The slide runs on September 28 from noon until 5 p.m. You can buy a single ride, a triple ride or a VIP unlimited ride package online here. Ordering before September 12 nets you a $5 discount on the registration fee. Prices go up as it gets closer to the event date.

Here's how the ticket pricing breaks down before September 12:

For a mere $15, you will get the chance to slide down 1,000 feet of vinyl one time. You will also receive a mouth guard and a water gun. You will have to bring your own inflatable tube or buy one on site.

For a mere $30, you will have the divine opportunity to ride the slide three times. You will get a mouth guard, a water gun and your tube will be provided for you.

For $50, the slide world is yours. You can go on the slide as many times as you like with a provided tube. You also get an extra sliding time, as for you, it will open at 11 a.m. and close at 6 p.m. Additionally, you will get a mouth guard, a better water gun, a T-shirt and a trucker hat.

You can also volunteer to work the slide and you will be rewarded with a free T-shirt and a couple trips. And if you just want to watch, it's free.

The slide has been a subject of much excitement and controversy. There was an online petition to shut down the slide amid concerns about the drought, a response from event organizers about how they planned to recycle the water, and finally a compromise in which the event was moved from September 27 to the 28th and it was agreed that the water would be collected and used in Griffith Park.