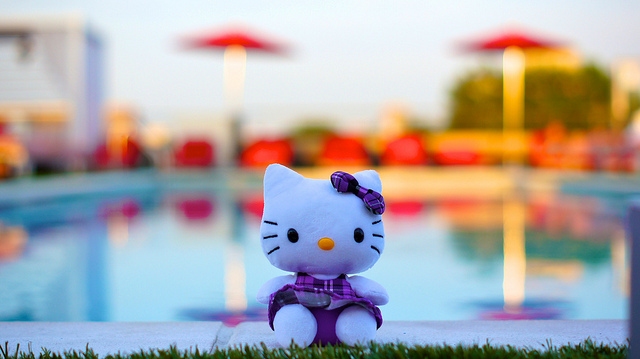 With the world's first Hello Kitty Con just around the corner, Los Angeles will become a playground for fans of the iconic Sanrio character. And that includes The Line in Koreatown, the official hotel of the fest, which is going all out on the craze with special Hello Kitty-themed rooms and even a Hello Kitty Spam musubi made by chef Roy Choi.

Choi, whose Pot and Commissary restaurants are situated inside the hotel, hasn't been a stranger to giving Hello Kitty love: he's been serving at his cafe a delectable Hello Kitty cake that's made with raspberry jam and lemon mascarpone cream.

The L.A. Times reports that there are already Hello Kitty napkins and bibs at Choi's Pot and Commissary restaurants, but coming soon in anticipation of Hello Kitty Con that kick starts on October 30, the hotel and select rooms will be filled with Kitty artwork and décor from October 29 to November 2, according to Sanrio. And if you reserve a Hello Kitty room package (which you can do now on the hotel's website), when you you get there, you can order Choi's adorable and kicked-up Spam musubi (that has HK's face on it) on the room service menu. Also, there will be Sephora make-up in the rooms you can take home, and limited edition Hello Kitty products you can buy at the Poketo store inside The Line.

There will also be a Hello Kitty 40th birthday party at The Line on November 1 that guests who booked the Hello Kitty room packages can attend.