Taco trucks have always been a staple of Los Angeles culture, but once food purveyors like Kogi BBQ entered the scene in 2008, the game completely changed. Gourmet food trucks started slinging creative dishes like Asian-Mexican fusion tacos, sushi burritos and East Coast lobster rolls—things that you wouldn't normally find in a basic taco truck. They're no longer a novelty but they've become a fixture at summer outdoor screening events, food festivals and Wilshire Boulevard during lunchtime. Today we're honoring our favorite restaurants on four wheels. Here are our favorite food trucks, and as always, leave yours in the comments. And don't miss our guide to traditional taco trucks, too. 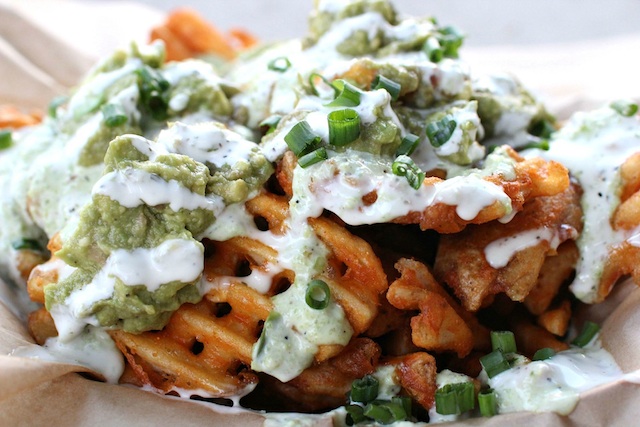 Wachos fries from The Lobos Truck (Photo via Facebook)

Complex flavors and decent portions are just some of the things that make The Lobos Truck special. They whip up kicked-up versions of American comfort food, from burgers to wings to mac and cheese. Also, if you've ever tasted their Wachos Fries, you'll understand why: they're waffle fries, served like nachos. We suggest getting their OG Wachos, which are topped with guacamole, sour cream, hot sauce, green onions, and bacon. Their Chinook Burger is also a winner: a Kobe beef patty sandwiched between soft, brioche buns that's covered with a garlic aioli. 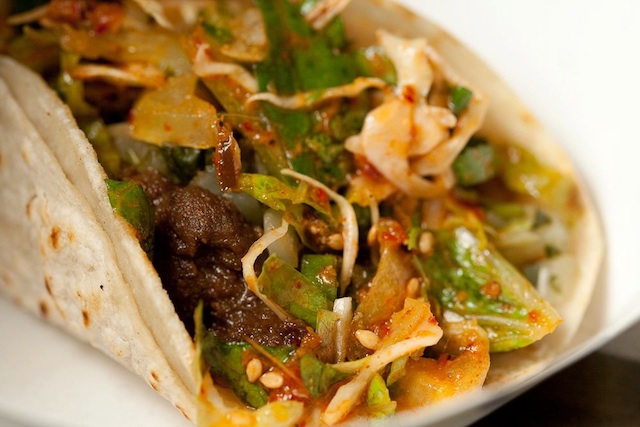 No list is complete without Roy Choi's OG Kogi BBQ that started the food truck craze in Los Angeles and led to his other ventures like POT, Chego and A-Frame. Melding together Korean and Mexican flavors, the folks behind this veteran food truck fleet whip up complex tacos and burritos with fillings like Korean spicy pork and short rib, as well as a kimchi quesadilla. And if you've saved some room for dessert, you might as well take a bite out of Kogi's Sriracha Bar—a delicious concoction of crispy rice and Sriracha ganache, dipped in caramel and chocolate. 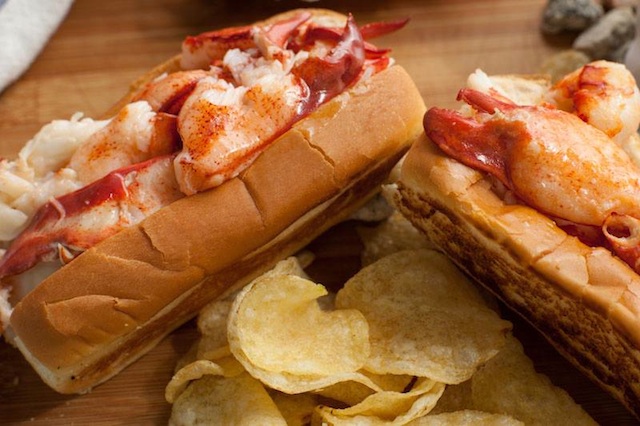 Cousins Maine Lobster is actually owned by a pair of cousins who ship lobster from Maine over to Los Angeles (and who were winners on Season 4 of Shark Tank). Their Connecticut Lobster Roll is a grilled bun with melted butter on it, stuffed with warm, chunky pieces of lobster in it; and their Maine Lobster Roll uses mayo and chilled lobster chunks. They don't skimp out on the lobster, but keep in mind that lobster rolls aren't cheap—and these sandwiches run about $13 a pop. If lobster rolls aren't your thing, they also serve lobster tacos, lobster bisque, and Tail and Tots (which you might have guesses are tater tots topped with pieces of lobster tails). 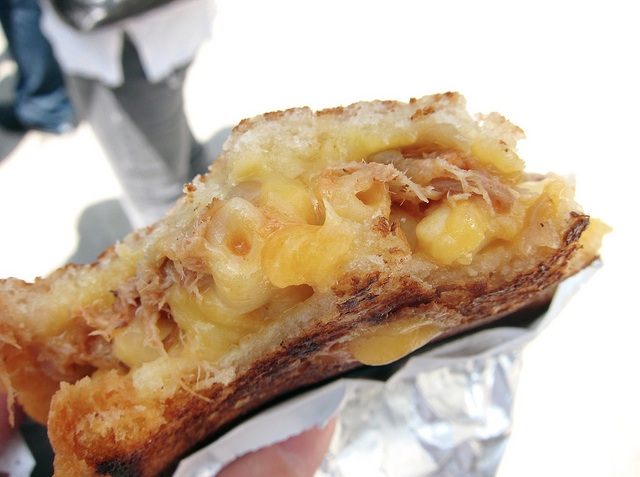 Every time The Grilled Cheese Truck rolls on by, we can't help but salivate a little. After all, these folks have been in the food truck business for awhile and were the first to introduce to us the fact that you could have a grilled cheese sandwich made with BBQ short rib, mac and cheese and caramelized onions. They also serve sides like tomato soup and tater tots—comfort food at its best that gets you all nostalgic about your childhood. 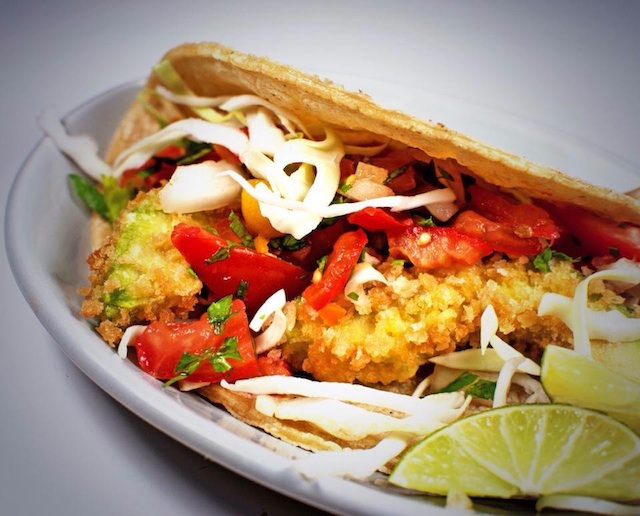 Green Truck lives up to its name, not only by powering its roving mobile with leftover veggie oil and having a solar-powered commissary, but with their eats as well. They use locally-sourced ingredients whenever possible for their health-conscious meals, like the Cali Kale Bowl made with organic kale, mushrooms, quinoa, Gilroy garlic, shaved raw beets and carrots; tossed with lemon, sea salt and pepper; and sprinkled with sesame seeds. They also sell kombucha, coconut water and raw vegan energy bars, offering up proof that fast food doesn't have to be bad for you. —by Lauren Lloyd and Krista Simmons 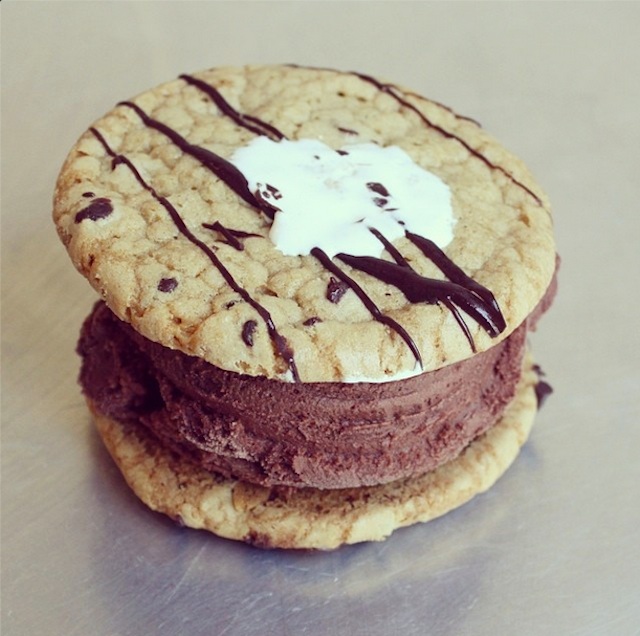 Coolhaus puts a fun twist on your run-of-the-mill ice cream truck. We're talking about a roving truck, where the folks inside let you decide what goes into your ice cream sandwiches (in the same vein as Westwood's Diddy Riese). You get to choose from a bevy of fresh cookie options like snickerdoodle and red velvet to creamy ice cream flavors like salted caramel and honeycomb. Plus, they add a wrapper to the sandwich that is edible, so that's pretty cool. These L.A.-based folks have been growing their business over the years, with their products ending up in grocery stores like Whole Foods and their trucks roaming around in other cities like New York and Austin: so you know they're doing something right. And hey, if you can't wait around for their food truck to roll on by, you can stop by their brick and mortar stores in Culver City and Pasadena. 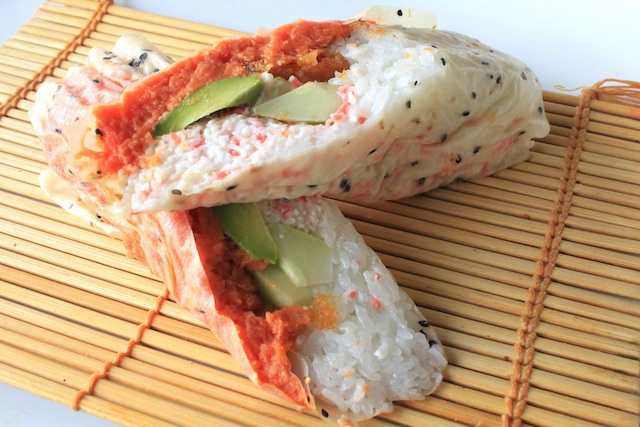 Jogasaki's items aren't too far off from what you'd find in a sushi roll or hand roll, but they're wrapped in a sesame soy paper just like a burrito, for when you're craving sushi and you're on the go. They've got spicy tuna to BBQ eel and even lobster sushi burritos. But one of their more unique items is the Spicy Tuna Nachos, which are served on a bed of Doritos with pieces of avocado and eel sauce. 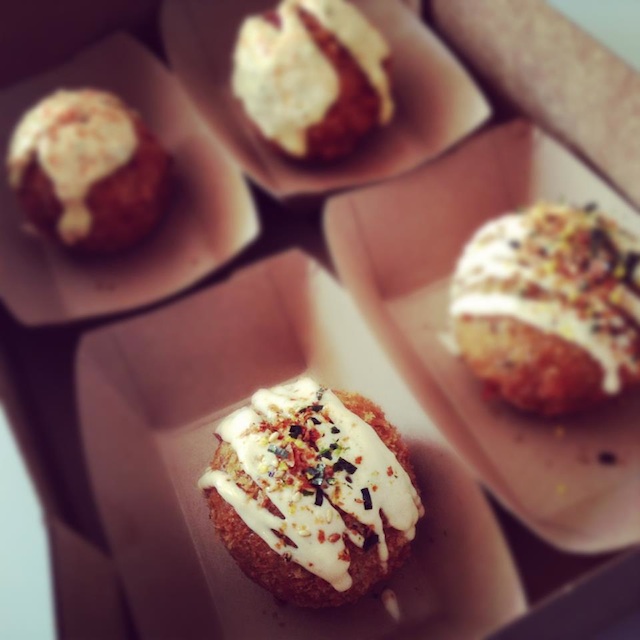 The dudes behind Seoul Sausage sure know how to pack a lot of Korean flavor into their fusion-y dishes. Their galbi sausage roll is topped with a garlic jalapeno aioli and kimchi relish, while their spicy pork sausage is complemented with an apple cabbage slaw. And we have to say we're addicted to their Flaming Balls, which are kimchi fried rice balls with spicy pork served with their DMZ sauce (a garlic jalapeno kimchi sriracha aioli). These guys were the Season 3 champions of Food Network's The Great Food Truck Race, so you know they're pretty solid. They opened their first brick-and-mortar store on Sawtelle Boulevard in 2012. 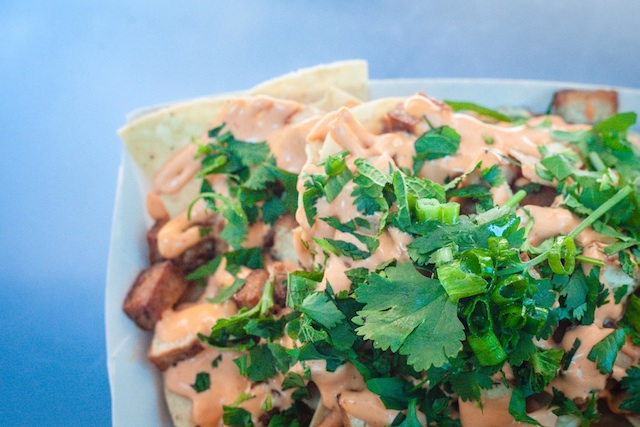 There used to be two major Vietnamese banh mi sandwich food trucks that were the top dogs in the game. One of them, Nom Nom Truck, closed down shop, leaving Mandoline Grill still standing tall. Their sandwiches are made with your traditional pickled carrots and daikon on a 12-inch crusty french bread roll, topped with jalapenos and cilantro. Even though they offer meats like grilled pork and chicken, it's nice to know they also cater to the vegan crowd with their tofu options. Mandoline Grill also has some Mexican-Vietnamese fusion items on their menu like tacos, but it's their Vietnamese Nachos that steal the show—they're topped with a Sriracha aioli sauce (and we suggest getting it with tofu). 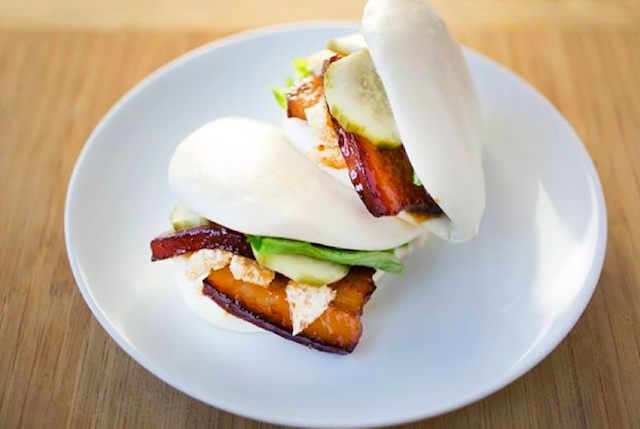 These guys may be newcomers on the food truck scene, but not in the culinary biz. The team behind Carb & Nation were sous chefs from Church & State. They bring to their truck menu artisanal sandwiches, homemade sodas (with flavors like hibiscus and mint, and kaffir limeade), and other gastropub fare. They don't kid around with their variety of Asian taco-like buns with fillings that include miso-glazed pork belly or short rib paired with Asian pear and Sriracha aioli. And since they rep a lot of food from different nations (hence the name of their truck), they whip up achiote-braised chicken sandwiches with mole sauce. They also offer sides like chorizo-stuffed, bacon-wrapped dates; we don't see any other food trucks doing that.

We know L.A. is home to the bacon-wrapped hot dog, but Dogtown Dog fulfills our dreams of putting all the glorious toppings we'd like on top of them. If you've ever thought about eating hot dogs as a breakfast item, their Morning Commute dog is bacon-wrapped and topped with sunny-side-up egg. Their California Dog features arugula, basil aioli and fried onions. One of our favorite items from these guys are their Buffalo Tots: crispy tater tots covered in buffalo wing sauce that you dip into blue cheese dressing. 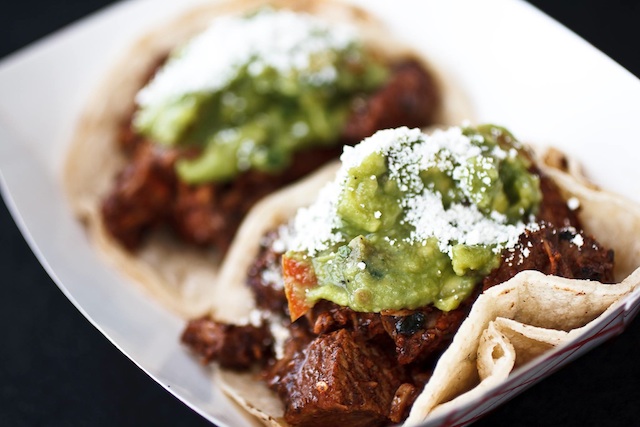 Komodo mixes up Cali-Mexican flavors with Southeastern Asian ones—from Indonesia to Singapore. These creative food truck veterans, who also opened shops in Venice and Pico-Robertson, rep their backgrounds with dishes like Blazin' Shrimp, a spicy Singaporean-style shrimp, to more off-the-wall items like their Fish N' Grapes tacos, where they deep-fry Alaskan cod and serve it with grapes and a roasted almond salad.