New Law: Drivers Who Don't Give Cyclists A Three Feet Buffer When Passing Could Get Fined 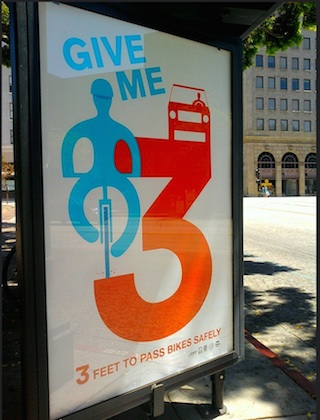 Signage for the 'Give Me Three' Campaign (Photo by melissssaf via the LAist Featured Photos pool on Flickr)
Beginning September 16, the "Three Feet For Safety" Act will legally require drivers to give cyclists three feet of room when passing. If three feet are not available, motorists must slow down and wait until they can safely pass. Those who do not could receive a $35 fine, which shoots up to $220 if a violator injures the cyclist.

Leland Tang of the California Highway Patrol says that in addition to writing the citations, they'll be ensuring that cyclists follow road rules as well, according to L.A. County Supervisor Zev Yaroslavsky's site.

The three feet buffer was explored back in 2010 at the Bicycle Summit held by then-Mayor Villaraigosa, launching the "Give Me Three" campaign. Governor Brown vetoed earlier drafts of the bill in 2011 and 2012, but a simpler version was finally signed by Brown in September of 2013, KTLA reports.

This is the first law that gives a specific safe distance in the state of California, but California is not the first state to enact it. Twenty-four others states have a similar three-feet passing law, and Pennsylvania requires that drivers give cyclists four feet. If you're curious, the National Conference of State Legislature has a list of each state and their specific laws (or lack thereof) here.