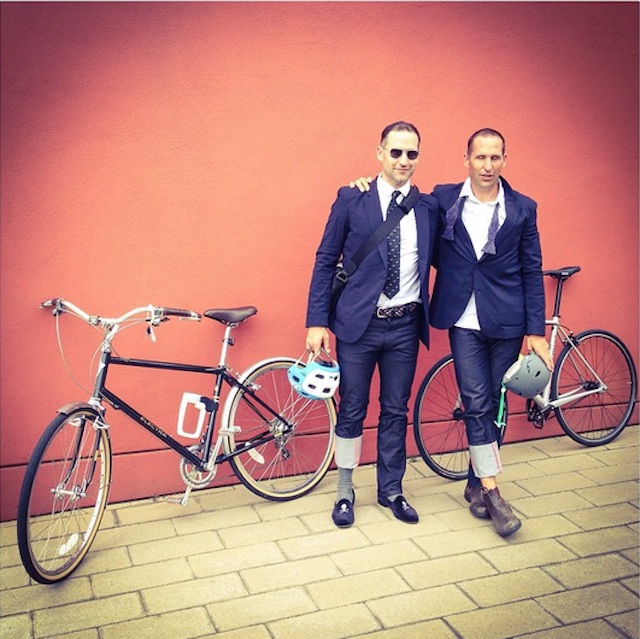 Call the Emmys whatever you want, but it's definitely a traffic jam. This year is even worse than usual, because the awards are on a Monday instead of a weekend and are slated to start right in the middle of rush hour. Limo allotments for the networks were cut, and attendees this year were encouraged to (gasp!) carpool together.

Some attendees got even more creative. Mad Men writer Tom Smuts lead a pack of twenty-some riders from Santa Monica to the red carpet in downtown this afternoon. Smuts tells The Hollywood Reporter that traffic wasn't the main reason he wanted to lead a ride. Instead he calls his ride "playful activism." Smuts regularly rides 35-40 minutes to the studio for his job, but he says he's felt a "confrontational attitude" from drivers.

"A group of people dressed appropriately riding to the Emmys sends a message about the kind of people who commute on bikes," he tells the Reporter. "It might make drivers more aware that we're not hooligans trying to lengthen their commutes."

Here he is before starting his ride this afternoon:

It's been a team effort getting him to the Emmys. Smuts looks great decked out in biking-friendly red carpet wear from Rapha. The Los Angeles County Bicycle Coalition designed a safe route for the group, and has been taking the opportunity to point out issues with the city's biking infrastructure along the way:

Smuts let the mayor's office and the TV Academy know, too. The Academy allowed six riders to cycle the carpet, include Smuts' wife and Homeland executive producer Meredith Stiehm. They are taking a wait-and-see approach to the Emmys, so they restricted how large his ride was. Smuts told the Reporter, "There was a feeling of 'let's keep this manageable, and if it's successful, let's make it better.'"

It looks good from what we can tell. The group stopped in the home stretch at Loyola Law School for a group shot:

Smuts is hoping it goes well, so that he can lead more rides to the Emmys and other events. And maybe even get some big-name starts like Matthew McConaughey.

These bikers weren't the only ones who opted for an eco-friendly form of transportation that bypassed traffic. Jimmy Kimmel took the Metro Blue Line and showed off his Mork suspenders: