Man Claims Uber Driver Promised Him A Low Fare, Then Charged Him $814 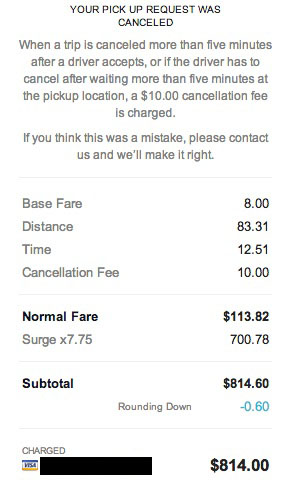 Rumuel's Uber receipt showing the final bill of $814. (Image courtesy of Alan Dumpit)
A man says that Uber charged his group a whopping $814 for a ride from El Monte to Culver City even though his driver promised it wouldn't be much more than $150.

Alan Dumpit tells LAist that he and his friends took one of the most expensive Uber rides we've ever heard of on August 3. The nearly 25-mile ride to El Monte had cost them $45, but thanks to surge pricing, they were charged $814 on the way back. He says the driver hasn't answered any of their calls and the Uber customer service has been of little help to them.

He told his story to LAist after he heard about a woman who had to pay $357 for a ride from West L.A. to Hollywood back in December, and wasn't aware of the surge pricing until she received her receipt.

According to Uber's website, surge pricing occurs when there's a spike in demand, and the rideshare app lets passengers know about the increased fares. If the rates are really high (like five times the standard fare), riders will have to type in the surge rate in a box on the app before accepting the bill so there won't be any mistakes—especially during a drunken moment. They call this their "surge sobriety test." Prices surge around closing time, but also during snowstorms in NYC and for Outside Lands in San Francisco.

However, Dumpit says what happened that night was more than just the group misunderstanding that there was surge pricing going on, and that they were grossly misled. Dumpit's friend, Rumuel (who asked that we only use his first name) was the one who had the hefty fare charged to his credit card, and was the one who contacted Uber's customer service via email to ask for help. He wrote, "Your help is appreciated as now my rent is overdue due [to] this very high charge."

In a series of email exchanges that Dumpit sent us, Rumuel wrote to Uber telling them his side of the story—that they found out there was surge pricing at the time when they needed a lift, which was around 12:14 a.m. However, the driver, whose name is Artur, told them that he could make the ride about $150 to $200 (for the ride that would have normally cost $113.82, according to the receipt), he claims. He says they agreed to this pricing, and the driver told them to cancel their original ride. Rumuel said that Artur then took his phone and canceled the ride for him and said he would reorder the ride and make some changes so they wouldn't be charged more than the price he quoted them.

When Rumuel emailed customer service, a representative wrote to him: "Sorry about the price catching you off guard! It looks like your trip was taken at a time when due to high demand for rides, our fares were increased x to ensure we had rides available for those who needed them. I looked into your trip, and i see that at first you requested an SUV trip with Artur at 9x surge. He then cancelled the trip and allowed you to request him on black car (lower rate and at a lower surge of 7.75x)."

And the 7.75x charge was what led to the $814 payment. Rumuel reiterated on the email chain that it wasn't him but the driver who took his phone and accepted those charges. But, the representative seemed to gloss over that and wrote a similar response: "Thanks for the additional information and clarification. The original trip that you accepted with Artur was an SUV request at a higher surge rate. You did confirm and accept this Surge on your own, which would have been significantly higher than this second trip."

An Uber representative responded to LAist with the following statement:

Uber was founded with the goal of ensuring a reliable ride, wherever and whenever. During times of peak demand - when there are not enough drivers on the system - fares increase so as to incentivize more drivers to come onto the platform.

UPDATE 8/22, 5:05 p.m.: Dumpit told LAist that Uber finally called his friend back and refunded the premium charges they were billed.