Amazon, iTunes, and big box retailers may have destroyed the music retail business as we once knew it (and in a Darwinian continuation of events, Best Buy is also suffering at the hands of Amazon), but that doesn't mean the classic record store isn't alive and well. In fact, with the revival of vinyl and even cassette tapes and and the internet broadening the culture's collective palate for more genres and artists, one could make the argument that record stores hold even more cultural cachet than they did before even if they are not as lucrative they used to be. These shops aren't just a business, but also cultural gathering point and a place of discovery. Given L.A.'s vibrant music scene and, frankly, glut of hipster enclaves, there are more than our fair share of great record stores in Southern California. Here are our favorites, and as always be sure to share yours in the comments. 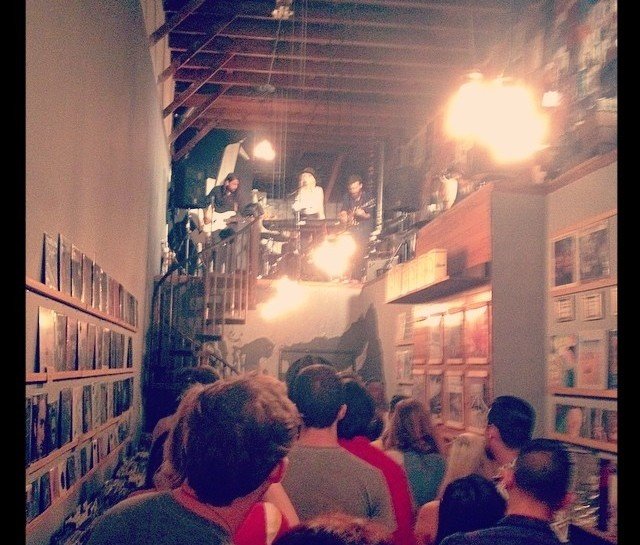 Origami Vinyl, serving as a venue during Echo Park Rising (via Facebook)

If not the biggest or even the best record store in town, Origami is without question the most important record store in L.A. Wearing multiple hats not only as a shop but also as a record label, concert promoter, and even a free concert venue, Origami is an indelible part of L.A.'s music scene. The small shop is located in the heart of Echo Park just down the street from The Echo, emphasizing its close ties to the neighborhood. Drop by for their in-store performances from local acts like LA Font and Heathers, and then pick up their latest 7" singles from the specially-marked "LOCALS ONLY" bin.

Vacation Vinyl is nestled in Silver Lake, right next to the comic book store Secret Headquarters (so you can make a whole afternoon of getting comic books and vinyl records if you so choose). Although they don't have the largest selection, sometimes it's less overwhelming to look for a new record when the selection is finely curated. They're known for carrying some choice vinyl, with the best selection of noise and metal in town. We love their knowledgeable staff, live shows, and their sweet collection of cassette tapes. Only at Vacation will Nina Simone, No New York, and Neurosis sit on the wall side-by-side. — Jean Trinh 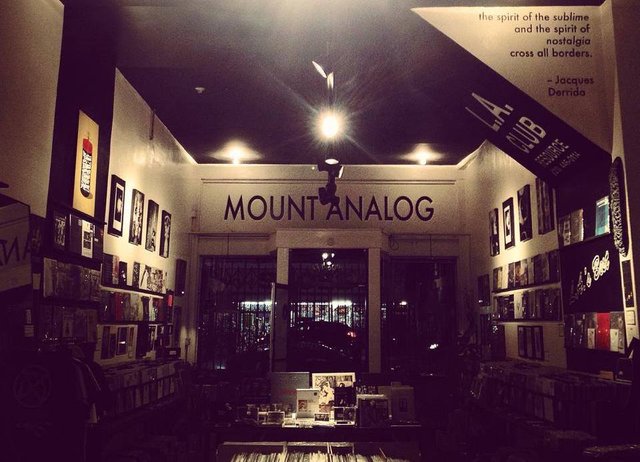 If guyliner, safety pins, and wearing a black leather jacket in the L.A. summer is your style, then Mount Analog is probably the store for you. The Highland Park boutique specializes in goth, industrial, darkwave, minimal wave, and any number of gloomy genres made up of bands and artists with really, really European-sounding names that probably made your mom appoint you a therapist when you were a teenager. And because it's not just music but also a way of life, Mount Analog also has books, instruments, movies (choice selection of European arthouse DVDs), and clothing. It's a store so finely curated and specialized that it'll make you want to be the goth you never knew you had in you.

In three years since the Chicago-native Permanent Records opened up its L.A. outpost, the store has become a major hub of the Highland Park and Eagle Rock music scene. It's played host to numerous record release parties and shows from the leading lights of the Eastside's vibrant psych and garage movement, and the owners also play in the garage rock band Endless Bummer. The bins at Permanent are a mix of used and new, with a selection heavy on indie and alternative, punk and proto-punk and post-punk, new wave, classic rock and the like. Permanent isn't too stocked with record collector fare, but there are some nifty rarities like SST promos on the wall displays going for $20-40. They also have tons of 7-inches, LP dollar bins, a smattering of tapes and a couple racks of (ugh) CDs. — Greg Katz 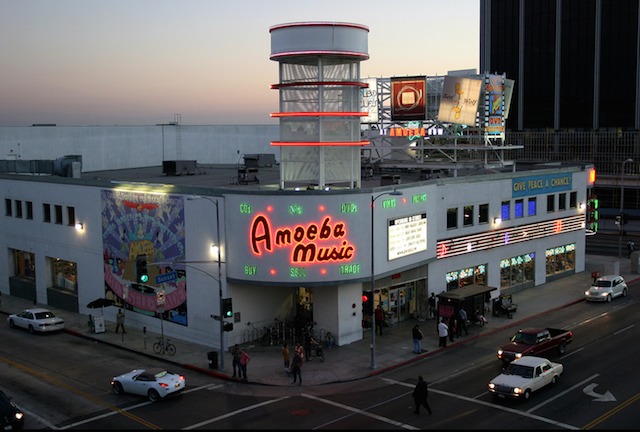 In a sense, putting Amoeba on a list of the best record stores is almost like putting Barnes & Noble on a list of the best bookstores in L.A. But its incomparable volume keeps it an essential go-to for music aficionados of all stripes, which makes it an important spot. With hundreds of thousands of items for sale on its floor on any given day, anybody looking for the latest album to top the Billboard charts or rarities on vinyl is bound to walk away with at least one thing on their shopping list. Another invaluable service Amoeba provides is probably the largest selection of movies on DVD and Blu-Ray, with everything under the sun covered from cult movies to Asian cinema. And we haven't even mentioned their weekly live shows, where a lineup ranging from indie bands all the way up to rock icons (such as Elvis Costello and Paul McCartney) have graced the Amoeba stage.

If you're a picky crate digger looking to grab rare used records that will impress other vinyl snobs, there's nowhere better in L.A. than Highland Park's Gimme Gimme Records, which transplanted to Los Angeles from New York in 2013. Gimme Gimme is a pretty small store, but there are a lot of crates and they cover a lot of genre ground—sure, there's a good rock selection, but there's also soul, soundtracks and jazz. Though there are plenty of records under $10, the store really shines when it comes to rarities in the $20-100 range because they call out the significant details on the tags. Looking for an early pressing of that Beatles album in mono? They have that. Want it in stereo? They have that too. Plus there are plenty of non-U.S. editions, 180-gram records, first-run pressings, unusual colors and more, all clearly marked. — Greg Katz 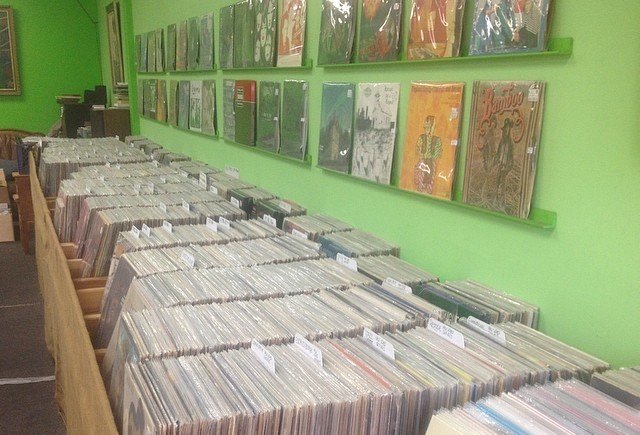 Burger Records in Fullerton, home to a cassette label and a cheeky green wall (photo via Facebook)

An outpost of cool in the cultural wasteland that is Orange County, Burger Records was founded as a cassette label in back in 2007, but opened a brick-and-mortar store in 2009 near Cal State Fullerton. The label specializes in lo-fi garage bands and their releases are obviously available at the store, but the location also expands the Burger brand with merch, the usual mix of used vinyl bins, work by local comic book artists, and also serving as a site for free shows. Every year the label also organizes the Burgerama festival, a festival of fuzzy garage rock in Orange County. Also check out their friends at Lollipop Records in Echo Park, just underneath the Sunset Boulevard overpass on Glendale Boulevard.

For those just buying their first turntables and looking to start a collection of classic records to put on during parties or while doing the dishes, Blue Bag Records is a great place to jump in. The Echo Park store’s selection is mostly used and well curated—spend 20 minutes in any crate and get a glimpse of the entire history of popular music by letter. The store errs on the side of thrift, with a lot of records going for less than $10. It's run by collectors, but the selection and pricing is populist. The store is pretty small but the selection is pretty big, with a lot of classic releases by well-known artists. There's a good number of compilations in the crates so you can get some variety on your new record player. Spend $100 at Blue Bag and you can go from having no records to having enough quality vinyl to soundtrack a get-together and impress your flanneled, mustachioed friends. — Greg Katz

Mono Records sits tucked away in a still-yet-to-develop block of Glendale in Echo Park. The tiny collector-oriented shop is a hideaway for rare used rock records—early punk and new wave is proudly displayed on the walls, ranging $20-40. Even though the space is small, it isn't at all crowded: there aren't many crates, so pretty much anything you might grab is an interesting find, and it's well-stocked with the kind of albums that you'd otherwise have to scour eBay or Discogs to pick up. The store has a notable cache of L.A.-oriented releases, including 80s South Bay punk records, Spanish-language titles and east L.A. bands of the distant past. — Greg Katz

Honorable Mention: Atomic Records in Burbank, a nicely organized shop in the Valley with plenty of classics records... Touch Vinyl on Sawtelle, the best spot for vinyl in the Westside... Rockaway Records in Silver Lake, for the true collector: rarities and memorabilia, including a $150,000 Beach Boys surfboard