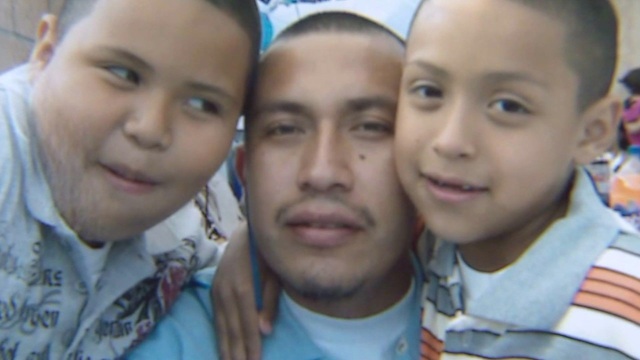 Omar Abrego and his sons (Photo via KTLA)

A father of three died 12 hours after LAPD sergeants beat him in front of his house in South L.A.

Two sergeants from the Newton Division pulled over Omar Abrego, 37, in front of his house on the 6900 block of South Main Street on August 2, according to KTLA. He was still in his work uniform driving an Amtrak truck.

The sergeants said they stopped him because he was driving erratically and almost hit a person in the crosswalk.

"After the vehicle stopped at 69th and Main, the suspect started to flee and the two supervisors caught the individual and an altercation ensued," LAPD Cmdr. Andrew Smith said. "As a result of that altercation…the suspect had a laceration and that’s one of the reasons they called the ambulance."

However, witnesses and family members say it was more than just a "laceration." One witness said he saw the sergeants beat Abrego for about 10 minutes and with a baton, while another said he saw a sergeant punch Abrego twice in the face with his fist. They saw a lot of blood on Abrego's face, and a witness even captured on cell phone video the sergeants pinning Abrego to the ground, and what looks like a pool of blood under him on the sidewalk. You can see the footage at the 0:41-minute mark in the video below:

“They were beating him real bad, and he died of the wounds,” said Yair Abrego, the victim’s brother.

Abrego suffered from a severe concussion and bruises to his face and body. He later died at the hospital. One of the sergeants had a broken hand, and another had a knee injury.

Los Angeles County coroner's Chief Craig Harvey told the L.A. Times that they are still determining the cause of death and are looking into more tests. However, the initial coroner's report said that Abrego was "combative and confused with acute cocaine intoxication."