LAist gets a lot of event announcements, and we comb through them all to bring you a curated list of what’s happening in LA this weekend, including these 25 events.

MUSIC:: Pandora presents a free show by The Antlers on Friday at Mack Sennett Studios on Friday. Attendees get a free, limited-edition event poster, open bar and a concert. Doors at 8 pm with the show at 9 pm. The event is 21+ and valid ID is needed. RSVP mandatory, though entrance is not guaranteed.

MUSIC: On Friday night, FIGat7th in DTLA presents a free concert during the FIGat7th Downtown Festival. Kevin Bronson of BuzzBands.LA will host the evening, which features a performance by the Afro-pop Fool's Gold and and opening set by Deradoorian. Parking is $5 on Friday nights after 4 pm with validation. Music from 8-10 pm.

SING-ALONG: The Friday Night Sing-Along summer series continues at the W.M. Keck Amphitheatre at Walt Disney Concert Hall on Friday from 6:30-8 pm for a night of Mariachi songs. Singers in the ¡Canta, Canta, Canta! program will get a chance to belt out mariachi favorites, backed by live music and with the help of easy-to-use song sheets. Sing along to songs like Besame Mucho, Volver Volver, La Bamba and more. Free, but tickets are required. Distribution at 6 pm. One ticket per person in line. First come, first served.

FOOD: 626 Night Market takes over Santa Anita Park again this weekend, from 4 pm-1 am on Friday and Saturday, and 4 pm-10 pm on Sunday. Check out more than 200 food vendors, merch booths, crafts, arts, games, music and other entertainment as well as a number of activities, including a spray paint art battle on Saturday and cooking demos on Sunday. Admission is $3 and parking is free. Children 6 and under are free.

MUSIC: Grand Performances presents Joe Driscoll and Sekou Kouyate in a free show at California Plaza as part of their first North American Tour. The collaborators—an electro-kora master and a beat boxer—just released the album Faya and perform at 8 pm on Friday night. On Saturday night at 8 pm, Grand Performances hosts performances by the folkie group Miner and the The Eagle Rock Gospel Singers, who serve up blues, gospel and folk tunes.

FOOD: As part of the Nisei Festival, the Eighth Annual Day-Lee Foods World Gyoza Eating Championship is being held on Saturday afternoon. “It is the biggest competitive eating event on the west coast, and the world’s top-ranked pro eaters (Matt Stonie, Miki Sudo, and eight-time hot dog eating champ Joey Chestnut) will be in DTLA vying for gyoza glory.” The competitors will try and eat as many gyoza as possible in 10 minutes. It’s being held at the same time with the Ramen Yokocho Festival. Admission is only $5 for both. The competitive eating competition begins at 2 pm.

PHOTO: On Saturday from 2-3:30 pm, Photo Friends of the LAPL presents the program L.A. in Focus: Gary Leonard in Conversation with LA Observed's Kevin Roderick. Held at the Mark Taper Auditorium, Central Library, the discussion and photo presentation will focus on Leonard’s 30+ years of photography, documenting life in Southern California, from LA’s punk scene to shots from his photo column, "Take My Picture Gary Leonard." Free.

LIT: Skylight Books holds a Bukowski Birthday Party on Saturday at 5 pm. To celebrate what would have been the author’s 94th birthday, the party includes authors Jerry Stahl, Richard Lange and Dan Fante reading from their fav Bukowski works. 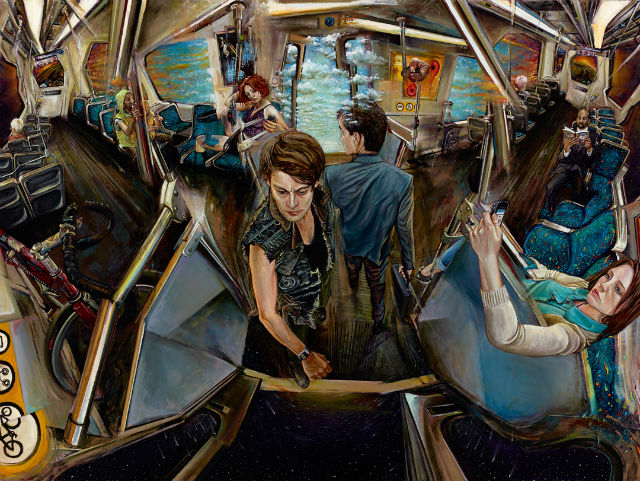 Coagula Curatorial gallery in Chinatown holds an opening reception on Saturday for the group show 'Western Twilight.' (Image: Courtesy of the artist Timothy Robert Smith and the gallery)

HOME TOUR: Sunset magazine and Modern Home Tours hosts the Sunset LA Beach Cities Home & Garden Tour on Saturday, and includes stops in Manhattan Beach and Venice. There are five properties selected by Modern Home Tours and Sunset’s home and garden experts. Tickets are $60 and include a wine and cheese reception and meet-and-greet with DISC Interiors at the Sunset LA Idea House in Manhattan Beach. 11 am-5 pm.

FOOD: In addition to Sunday’s Fried Chicken Festival in Chinatown, there’s an IHFC (International House of Fried Chicken) Pop-Up on Saturday. At Blank Kitchen from 6:30-10:30 pm, chefs Fata Wijaya of Carb & Nation, Farid Zadi of Doner Revolution and Susan Park of Yum Rice and Noodle Bar serve up their own takes on fried chicken (from Indonesian to Korean to Algerian styles). The event is open to the public, it’s cash only. Seating is limited, so get there early.

FLEA MARKET: Arts District Flea, a weekly indoor flea market in the heart of the LA Arts District on Fridays through Sundays, presents a special event on Saturday night from 8-11 pm. Part art show, music concert and party, the free event includes live performances by No Jet Left and MaadWest. Food vendors and cocktails available throughout the night.

FILM: Cinefamily screens a rare 35mm print of The Baby (1973). It’s a bizarre film about a social worker investigating the case of “Mrs. Wadsworth (Fifties starlet Ruth Roman, Strangers On A Train), her two buxom daughters, and son "Baby" — a mentally-disabled man who sleeps in a crib, eats in a high-chair, crawls, bawls and wears diapers.” There are secrets in this family, including drugs, abuse, incest and the like. Screens as part of the Heavy Midnights series at 11:59 pm on Saturday night. Tickets: $12/free for members.

VIRTUAL REALITY: What started up as a casual group on Meetup.com has now become a go-to event for virtual reality fans. The VRLA exhibition gives the public to check out burgeoning technologies like Oculus Rift and Sony Morpheus, as well as other items like 3D scanners and 3D printers from multiple vendors. Presentations throughout the day. Held at New Deal Studios in LA from 2-8 pm. Ages 13+. Tickets: $10.

NAUGHTY CIRCUS: There’s a naughty circus in town on Saturday night beginning at 9 pm. It’ll look like a circus, but there’ll be “topless bartenders, circus emcee, naughty fortune teller, lap dances, a naughty fun house where you can get as naughty as you desire and more.” Performances (belly dancers, sword swallowers etc. will be held every half hour). Adult games through the night, too, from bobbing for penises to naked twister to a spanking booth and topless water wrestling. Tickets: $25 (for women), $100 for men. 21+ event.

ART: Nerdist Showroom at Meltdown Comics presents the exhibition, MEATBALL HEAD: An Art Gallery Celebrating Over 20 Years of Sailor Moon, with an opening on Saturday night from 7-11 pm. The show celebrates the Japanese phenomenon that is Sailor Moon, with more than 85 artists participating. The show runs through Aug. 24. Free beer, wine, and surprises. Free entry.

AMBIENT MUSIC: Sonos Studio presents a dusk-to-dawn program of tonalism and ambient music on Saturday night to Sunday morning. The event is inspired by the rare recording of Dream House by minimalist composer La Monte Young and the works of John Cage, Terry Riley and Yoko Ono. From Sonos: “Eight artists will take turns working through the night to improvise pieces of live music inside the Studio’s current exhibition “Algo-Rhythms,” which will react to the music, creating an ever-evolving overnight piece of art. The entire night’s audio will be fed through a Sonos Connect, creating individual listening environments throughout the Studio.” Bring pillows, cushions or sleeping bags. The event begins at 6 pm on Saturday night. 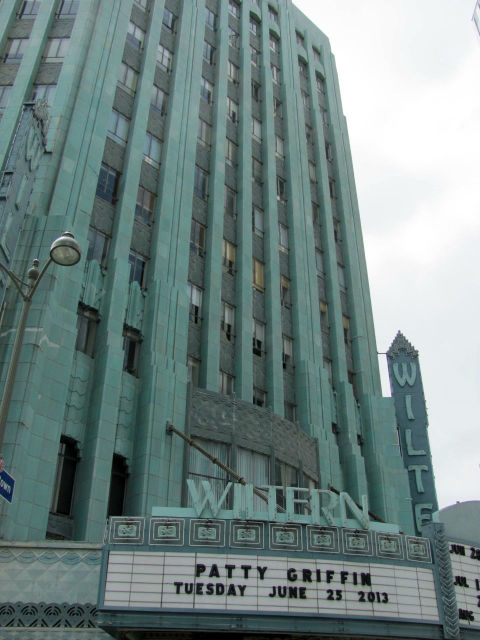 Take a historic tour of the Wiltern on Sunday. (Image: Christine N. Ziemba)

HISTORIC TOUR: L.A. Historic Theatre Foundation holds the tour, Hidden Wiltern: An All About-Behind-the-Scenes All-Access Tour of the Wiltern Theatre, on Sunday at noon. Check out places you never had access to before, from the basement to the dressing rooms and more. Hear the history and watch a slideshow presentation about the historic building and theater. Tickets: $15.

COMEDY FEST: Adam Carolla, Jeff Garlin, Wendy Liebman and more than 200 up-and-coming comedians from across the country head to Burbank this week for the Burbank Comedy Festival, which runs Sunday through Saturday, Aug. 23. Throughout the week, there are a number of scheduled events from underground showcases, classes, workshops, industry panels, after parties and live podcasts. Garlin opens the festival on Sunday at 7 pm with a show at Flappers Comedy Club. Opening night tickets: $20.

MUSIC + ART FESTIVAL: The U.R. ART Monthly Music Festival returns to Bergamot Station in Santa Monica on Sunday. Combining music, live-painting, food and fashion, the event provides a place for L.A.’s artist community to showcase their works. Music by Doc Martin, DROOG and more. Food available by The Grilled Cheese Truck and The Green Truck serve up food and Pattern Bar is on site with craft cocktails. Tickets: $20-$26.

COMIC BOOK CONVENTION: The Comic Book and Science Fiction Conventions—staged since 1977—is one of the longest-running conventions of its kind. Held on Sunday at the Shrine Auditorium from 10 am to 5 pm, the program features programs, guest speakers and a dealers’ room. Admission: $10 or $12 for early admission at 9:10 am for first dibs on collectibles.