23 Of Our Favorite Events In Los Angeles This Week

LAist gets a lot of press releases, and we go through most of them to curate a list of our favorite events happening in L.A. Here are 23 events you should know about this week. Read on for all the details.

FILM: Cinefamily continues its week-long run of The Dog, a documentary of John Wojtowicz—whose larger-than-life persona was captured in Al Pacino’s portrayal in Dog Day Afternoon. Wojtowicz lived a libertine lifestyle, bedding both men and women and becoming a force in the gay rights movement. In August 1972, he attempted to rob a Brooklyn bank to pay for his lover's sex-reassignment surgery that resulted in a 14-hour hostage situation that was captured on TV. Directors Allison Berg and Frank Keraudren began filming The Dog in 2002, and with interviews with Wojtowicz, his friends, family and archival footage, the filmmakers have crafted a rich portrait of a guy who—despite some flaws and missteps—comes across as utterly likeable. His life’s mantra says it all: "Live every day as if it's your last and whoever doesn't like it can go fuck themselves and a rubber duck." If you miss the run at Cinefamily (which ends Thursday), it’s out on VOD on Aug. 15. On Monday night, The Dog plays at 7:30 pm and 9:50 pm.

MUSIC: Sara Bareilles performs at the Greek Theatre on Monday, headlining her Little Black Dress summer tour to support her latest album The Blessed Unrest. She’s joined on the bill by Hannah Georgas and Emily King. 8 pm. Tickets: $35-$65. [Georgas also plays a solo set at The Hotel Cafe on Tuesday at 8 pm.]

FILM: The Viper Room is finally legal—celebrating its 21st anniversary in August with a week-long series of events beginning on Monday with a party at 8 pm, followed by a performance by R&B soul legend Bettye LaVette. Cover: $20. Check the schedule for the full lineup of anniversary week concerts.

ROSE: We love rosé wine in the summertime. Starting on Monday, the Delphine Eatery & Bar launches a new Rosé Happy Hour menu (Monday-Friday from 5-8 pm) in the bar and lounge area. The happy hour also features farmer’s market-fresh small plates ($7). A portion of the proceeds from the new menu, which features only French, Italian and California rosé wines and mixed rosé drinks, will be donated to the fight against breast cancer.

FILM: The Craftswoman House and the Women's Center for Creative Work continues its Feminist Film Screening Series at the Echo Chamber in Echo Park. Screening on Monday is The Punk Singer, a film about Kathleen Hanna—lead singer of Bikini Kill, Le Tigre and a “fierce voice of the riot grrrl movement.” The film’s followed by a Q&A with the film’s director Sini Anderson. Films begin at 8:30 pm. Suggested donation: $5-$20. Space is limited to 40 people with priority entrance to those who RSVP ahead of time.

GRINDHOUSE FILM: The Grindhouse Film Festival is at the New Beverly for an “Eastern Grind” double feature on Tuesday. The first Hong Kong action classic is the early Jackie Chan kung fu / comedy Snake in the Eagle’s Shadow (1978). It’s followed by The Longest Nite (1998), featuring Tony Leung and Lau Ching-wan in a following a Triad war in Macau. The screenings begin at 7:30 pm and tickets are only $8.

COMEDY: Could the new musical-comedy duo Erin and MeLissa be the next Garfunkel and Oates? Check them out and see for yourself on Tuesday at 9:30 pm at the Upright Citizens Brigade. $5.

FILM: The Flux Screening Series is at the Hammer Museum on Tuesday at 7:30 pm. Flux screens innovative short films, music videos, filmmaker retrospectives and motion art from around the world. The August program includes Josh Soskin's short film, "La Carnada"; Ruben Fleischer’s (Zombieland) new short film, "A Way In"; and music videos for OK Go, Royal Blood and DyE ft. Egyptian Lover among others. After the screening, there’s a few filmmaker presentations and an after-party.

FEMINIST LIT : The Feminist Library On Wheels (F.L.O.W.) an arm of the Women's Center for Creative Work, is holding a fundraiser at Lot 1 in Echo Park. The group is trying to collect books and texts of all kinds, which they will make available via bicycle—at future events around the city. Playing on Tuesday’s party are Charlyne Yi Jordan Katz; Evan Kertman; performance artist Lenae Day and more special guests. Tickets: $5 suggested donation.

MUSIC: The totally danceable Swedish trio Nonono plays the Roxy on Tuesday in an all ages show with Erik Hassle and MYPET also on the bill. Doors at 7 pm. Tickets: $13-$15. 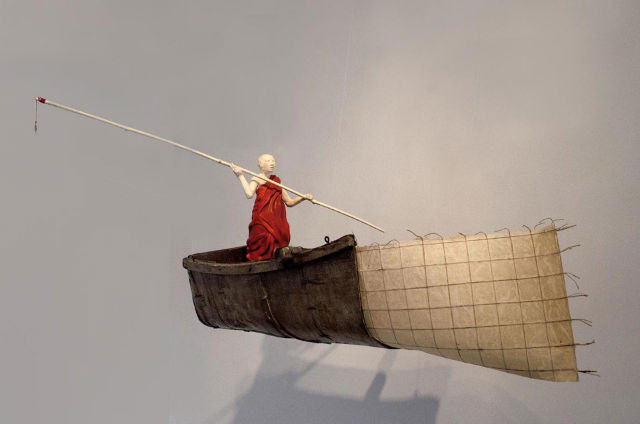 The TAG Gallery opens a show featuring winners from the CA Open. (Image of Sandra Cohn's work Crossing Over, courtesy of the artist and gallery.)

ART: TAG Gallery at Bergamot Station in Santa Monica opens a show on Wednesday that exhibits 53 winning artworks of the California Open Juried Competition. The works will be on view through Aug. 29. The opening reception-awards ceremony is on Saturday from 5-8 pm.

BOOKS: Lev Grossman, book critic and lead technology writer for Time magazine, stops by Vroman’s on Wednesday at 7 pm to read from and sign his latest novel, The Magician’s Land. It’s the third in a fantasy trilogy, following his NYT bestsellers The Magicians and The Magician King. We’ve read the first two and enjoyed their Narnia-Harry Potter-for-adults sensibilities.

COMEDY: Brooks Wheelan, who spent one year as an SNL cast member this past season, plays a stand-up show at Largo on Wednesday night. Doors at 7 pm, show at 8:30 pm. Tickets: $30.

BAR CRAWL: Ludlows Jelly Shots presents a #CocktailCrawl series in August, featuring bars like The Spare Room, Sunny Spot and Honeycut. They kick things off in Hollywood on Wednesday (8/13), followed by the Westside on 8/20 and DTLA on 8/27. The $50 price includes UBER transportation to and from each of the three bars; a Ludlows Jelly Shot w/ a paired cocktail at each bar; Coolhaus ice cream treats at the last bar and a swag bag to take home.

FILM : There’s a reception and screening on Thursday of South American Cholo, a short Brazilian documentary lowrider film directed by Phoung-Cac Nguyen. Photographs shot around the movie's filming by Cia de Foto and Adalberto Rossette will be on display. The film screen multiple times at The Line Hotel during the reception between 7-9 pm. Customized cars and bikes will be on view at the Hotel, too.

​MUSIC: The Skirball Center’s free Sunset Concert Series continues on Thursday at 8 pm featuring conjunto legend Flaco Jimenez teaming up with Max Baca and Los Texmaniacs. The evening is free, starting off at 7 pm with a DJ set by Betto Arcos. Free. Parking: $10 per car (cash only) or take Metro Rapid 761.

MUSIC: The Twilight Concert Series at the Santa Monica Pier continues on Thursday at 7 pm with the upbeat rhythms of La Santa Cecilia w/ Sergio Mendoza y La Orkestra. The concert is free. Organizers’ tip: Park on the lots on 4th Street/Colorado to help avoid traffic on the way out.

DRINK: Jeremy Fall, designer and entrepreneur, makes his pop-up club Genesis—more permanent. The emphasis in the new venture, located at 1231 N. Vine in Hollywood, falls on good times, dancing and simple drinks. No mixology or a cocktail list here.

ART: If you’re heading to the Downtown LA Art Walk on Thursday, be sure to swing by and see the first physical art show by online artist B6 (aka 22-year old Brittney Scott​). An EDM scene staple and member of the internet clique Yung Klout Gang, her works feature digital portraits of Diplo, A-trak, Major Lazer, Jerome LOL and new mixed media pieces. The gallery space is located across from The Ace at 958 S. Broadway. The opening is from 6-11 pm on Thursday, and the works will be on view Monday through Friday from 11 am-6 pm until Aug. 29. RSVP for the opening.

MUSIC: The Irish singer-songwriter Imelda May brings her musicianship and her blues/rockabilly sound to the El Rey on Thursday. She’s on tour to support her most recent release Tribal. The Rhythm Shakers open. The show is 18+. Doors at 8 pm. Tickets: $22.