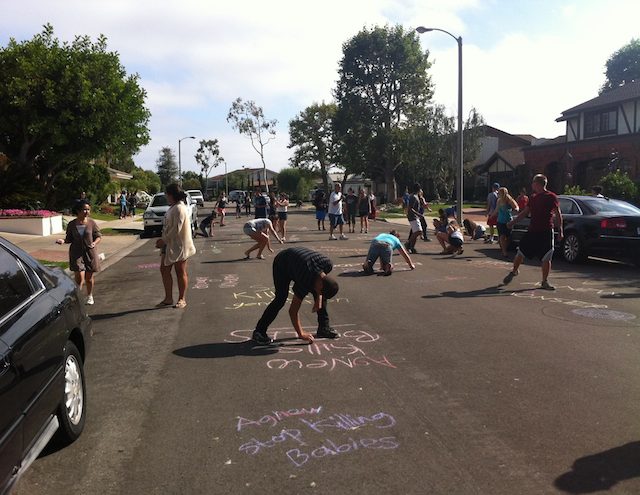 A group of anti-abortion protesters who wrote messages like "Neighborhood Serial Killer" in chalk outside of an obstetrician's home in Newport Beach over the course of a year will not be facing charges.

The protesters come from the pro-life group, 'Survivors of the Abortion Holocaust.' The group is often the subject of controversy for using graphic images of aborted fetuses in their demonstrations, and for using the word 'holocaust.' They call their chalking demonstrations 'chalk and awe' protests.

The group began protesting Dr. Richard Agnew, an obstetrician affiliated with Hoag Hospital, after he objected to the hospital's ban on elective abortions. Complaints from neighbors inspired the city council to pass an ordinance saying that protesters of a private residence must do so from at least 300 feet away.

On July 29 and July 1, members of the group returned to Agnew's neighborhood and, while complying with the 300 foot limit, wrote phrases like "your neighbor is a monster" around the doctor's home, The Daily Pilot reports. His family has repeatedly said that abortions are a pretty small part of what he does at work. His son said that the fetuses involved had "severe problems." His wife has referred to the protesters as threatening, saying she was afraid somebody would "get killed if we don't address the matter."

Agnew's neighbors don't like the protesters either, and want them to be charged with vandalism. But the case filed by detectives the O.C. District Attorney's office regarding the most recent chalking wasn't about vandalism or free speech; it was about reports of a fight that broke out between the protesters and residents. Agnew's supporter and neighbor Paula Durnian, 59, and Survivors founder Jeff White, 56, citizen's arrested each other, both accusing the other of being hostile. That case was dropped today, according to D.A. spokeswoman Farrah Emami, due to lack of evidence.

The founder of Survivors says if it came down to it, they would sue over their First Amendment right to chalk up the streets, but that may not actually be something that's protected as free speech. Just ask Occupy L.A. Defacing any property, even if you do it with something non-permanent like chalk, is still considered vandalism under California law.