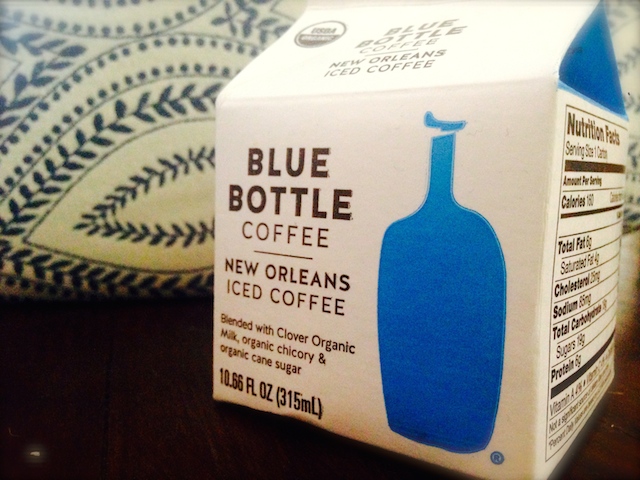 Call us nitpickers or details people, but it's the little things in life—and in the food world—that get us excited. Whether it be an off-the-wall menu item, a particularly stylish bathroom or a restaurant's signature scent, we get stoked on the minutiae that makes our dining scene unique. Consider this the sacred space where we feel safe to express our current obsessions and openly explore our favorite things.

Chicory itself is a unique ingredient. The flower of the plant, coincidentally, is blue. But it's not the flower, but rather the chicory root that's applied in this sweetly satisfying drink.

Chicory has been used for many years in addition to or as a substitute for coffee. The dried bitter root has historically been added as a flavor supplement during times of economic hardship to make coffee taste more like a dark French roast. This idea was hatched back in 1806, when Napoleon declared France a self-sufficient country, cutting it off from trade routes—and their beloved cups of caffeine. The ban may have been lifted, but the tradition of using chicory remains in places in Southeastern Asian countries like Vietnam and other locales with a heavy French influence like New Orleans.

Today it's more of a flavor component than a product of necessity; Blue Bottle is hardly starving for cash flow, as evidenced by their rapid rate of expansion throughout Los Angeles and into the international market, with their first shop opening in Tokyo later this year.

And they certainly aren't skimping on quality ingredients. "In the past, we've sourced a very tasty Peruvian coffee," says Byard Duncan of Blue Bottle. "The next batch will be a delicious blend of Peruvian and Honduran coffees, made specifically for New Orleans."

Why it's rad: If you've ever experienced Cafe Du Monde's beignets and cafe au lait, then you'll get a blast from the past from Blue Bottle's version. Even if you haven't visited New Orleans, you'd be crazy not to enjoy it, especially on a muggy L.A. day.

Let's start with the presentation: we're admittedly suckers for their playful packaging, which reminds us of the chocolate milk that LAUSD used to serve alongside their now-axed freshly baked chocolate chip cookies. (The only thing more awesomely nostalgic would be someone slanging those Don Simon sangria juice boxes from Spain. Someone do that, please.)

Then of course, there's the taste. It's rich. It's sweet. And it's delicious, purist coffee snobbery be damned.

The San Francisco-based specialty coffee company said that the inspiration for their ready to drink option was from all of the mediocre, "erratically composed and often disappointing" canned iced lattes out there. Their retaliation is made using a 12-hour cold brew process and then blending it with a few simple local ingredients.

Seeing as how making quality cold brew in-house is an incredibly intricate and time consuming process, we imagine you'll be seeing a lot of these little cartons at cafes around town in the years to come, ponying up right next to the stubbies of Stumptown cold brew.

How much it'll cost you: Each carton is $4, but you'll definitely want to splurge on one of their delightfully chewy homemade saffron gingersnap cookies on the side. (The pleasant punch from fresh pressed ginger will make you forget about the lack of beignets in L.A., and the sad demise of the LAUSD cookie, for that matter.) You can also buy a DIY kit and make your own for $18 here.

Where to find it: The Tetrapacks are actually made and distributed by the dairy company Clover to various Whole Foods around California, but you can also get both the cartons and a non-prepackaged version served in a plastic takeaway cup at the new Blue Bottle cafe in DTLA's Arts District in the former Handsome Coffee Roasters space.