22 Of Our Favorite Events in Los Angeles This Week

LAist gets a lot of press releases, and we go through most of them to curate a list of our favorite events happening in L.A. Here are 22 events you should know about this week. Read on for all the details.

MUSIC: The Futures League begins a Monday night residency at The Satellite beginning on Monday and running weekly in August. The four piece band’s “60's-influenced psych-garage rock” is promoting its new EP Don't Be A Drag. Doors 8:30 pm and show at 9 pm. The show is 21+.

MUSIC: It’s a School Night welcomes live music and DJ sets from both up-and-coming and seasoned artists every Monday night at Bardot in Hollywood. Playing live on Monday are: Figs Vision, Freedom Fry (EP release), Criminal Hygiene and Liam Bailey. DJ sets by Cedes and P. Morris. Free with RSVP for those 21+; $10 for 18+ with RSVP. Doors at 8 pm.

FILM: Every Monday evening in August at 8:30 pm, Craftswoman House partners with Women's Center for Creative Work to present A Feminist Film Screening Series at the Echo Chamber in Echo Park. On Aug. 4, the program includes short films by Nancy Holt, a “pioneer in the land-art movement” of the 1960s and 70s. Snacks, sodas and water will be provided. Suggested donation: $5-$20.

MUSIC: Maudlin Strangers start an August residency at the Bootleg HiFi on Aug. 4, supported by Leland Pollimer and TJ Mizell. Jake Hays—the son of Runaways’ Cherie Currie—sings and plays every instrument on every recorded track. All shows are free and 21+. Doors at 8 pm. 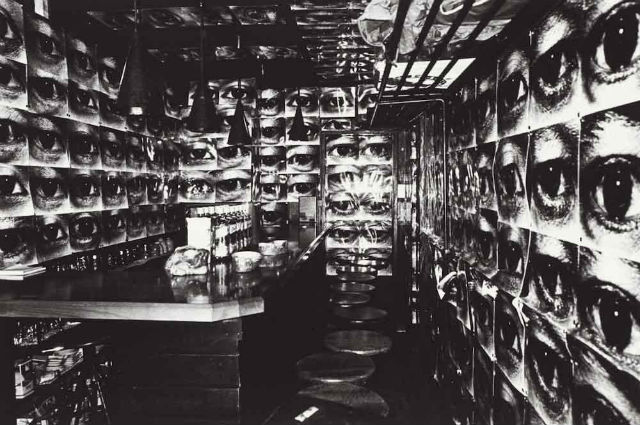 The new exhibition 'In Focus: Tokyo' opens at The Getty on Tuesday. (Image: “Bar,” photographed in 2002 (Photo by © Daido Moriyama, courtesy of The J. Paul Getty Museum, Los Angeles, Purchased with funds provided by the Photographs Council)

ART: The Getty Center opens the new exhibition In Focus: Tokyo, which showcases four contemporary photographers who “interpret the dense, hyper-real metropolis of Tokyo from four different perspectives.” Works by Mikiko Hara, Daidō Moriyama, Shigeichi Nagano and Masato Seto. The exhibition is on view through Dec. 14.

GAMES: On Tuesday and Wednesday, the SPiN Standard in DTLA holds two pop-up arcade nights. From 4 pm to 2 am, there are 20 different arcade machines and five ping-pong tables brought into SPiN. Cover is $5 at the door, but once inside, all games are free with unlimited play. 21+.

COMEDY: The iO team Mr. Body performs an improvised murder mystery during Long Hard Tuesdays at the Straight Jacket Society Theatre. 8 pm. The show is free and open to the public.

COMEDY : All Things Comedy (ATC) network presents All Things Comedy Live Podcast with Bill Burr and Al Madrigal, on Tuesday at 7 pm at NerdMelt. The show features Burr and Madrigal in conversation with ATC podcast comedians Bert Kreischer, Tom Papa and Christina Pazsitzky. Proceeds from the show help support the network. Tickets: $10. The show is 18+.

ART: The Hammer Museum presents the program Devin Kenny: In the Cloud / On the Ground on Tuesday at 7:30 pm. The Made in L.A. artist uses music, video and spoken word to examine “structures of power as they relate to social media."

LIT TALK: On Wednesday, The Writers’ Room with Reza Aslan continues its series of conversations with writers around town at DBA in WeHo. Joining Aslan in conversation are screenwriters who’ve turned blockbuster books into hot scripts: Scott Neustadter (The Fault In Our Stars) and Kelly Marcel (Fifty Shades of Grey). The evening ends with a Q&A with the audience. The house band begins at 7:30 pm and the talks begin at 8 pm. Tickets: $30. Seating is on a first-come, first-served basis.

FILM : On Thursday at 8 pm, there’s a free advanced screening of The Possession of Michael King (2014), hosted by Fangoria! at the New Beverly. Written and directed by David Jung, the film follows Michael King (Shane Johnson), a documentary filmmaker who doesn’t believe in God or The Devil. After his wife passes away suddenly, he decides to let occult experts experiment with him to disprove the paranormal, but something does happen…. To attend, send an email to fangoriascreening@gmail.com. Write “POSSESSION OF MICHAEL KING: LA” as the subject line.

​TRANSPORTATION TALK: CicLAvia launches its new CicLAvia Explores series—a new slate of activities set apart from the huge car-free events throughout the year. The new program kicks off on Thursday night from 7-10 pm with a panel discussion, The New Streets of LA, followed by music, food and drinks held at the pop-up Levi’s Commuter Workspace, near October’s Heart of LA route. 21+. RSVP needed.

STORYTELLING: Eat Your Words, a live storytelling event hosted by Greg Walloch, is at The Standard, Hollywood’s Cactus Lounge from 8-10 pm on Thursday. The evening features stories that are inspired by a food theme, told by storytellers and comedians and other foodies. Storytellers include: Jacob Womack, Jessie Beth Kahnweiler, Monica Palacios, Sterling Gardner, Jon Huck and Walloch. Free, but RSVP needed.

MUSIC: The Twilight Concert Series at the Santa Monica Pier continues on Thursday at 7 pm. Headlining the night is Jagwar Ma with Fascinator and KCRW DJ Jason Bentley spins a set. Organizers’ tip: Park on the lots on 4th Street/Colorado to help avoid traffic on the way out.

FILM: The Echo Park Film Center holds an open screen night on Thursday at 8 pm. It’s a potluck of filmmaking, where people are encouraged to bring one of their films or works in progress (10 minutes or fewer). Formats accepted: DVD, VHS, mini-DV, DV-CAM, Super 8, standard 8mm, 16mm. Suggested donation: $5.