Video: Woman Hit By Car During Zombie Walk At Comic-Con 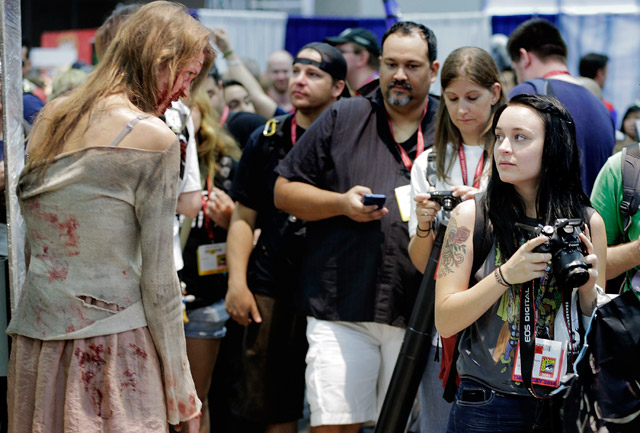 Some zombie cosplayers at Comic-Con who take their “Walking Dead” way too seriously last night smashed the windshield of a car, which then sped off and hit a 64-year-old woman.

The group that was part of the annual “Zombie Walk” at Comic-Con, in which people dress as zombies and walk around Downtown San Diego acting zombie-ish, according to TMZ. The group went up to the car at an intersection and began attacking it, and someone jumped on the hood and smashed the windshield, San Diego police said.

A hit and run during tonight's #zombiewalk in downtown SD. The story on @fox5sandiego at 10p pic.twitter.com/5RF4qPLP7t

The family, which includes two small children and every member of which is deaf, became frightened and tried to drive off, hitting a woman who was not part of the march in the process. The woman was hospitalized with a possible broken arm. Police made no arrests but are investigating the incident.

Here are a few photos from yesterday's Zombie Walk:

Update 10:30 a.m.: Cell phone video of the event has been uploaded to YouTube that shows the incident taking place. You can see and hear the windshield being punched in the video, as well as the car speeding off and a woman on the ground, presumably injured:

The car has been identified as a black Honda Accord, driven by a 48-year-old man who was cited but will not be criminally charged, according to NBC San Diego. Two other people also sustained minor injuries in the incident, which happened at around 5:30 p.m. yesterday.

Zombie Walk organizers tweeted that they would set up a fund for the injured woman:

We confirmed not a member of our walk. 64 year old woman, broken arm, will be okay. Our thoughts are with her. Driver arrested. #SDCC

We REALLY hope we can find out more and the victim is okay. We will find out info and set up fund to help with reward and/or med $ #SDCC