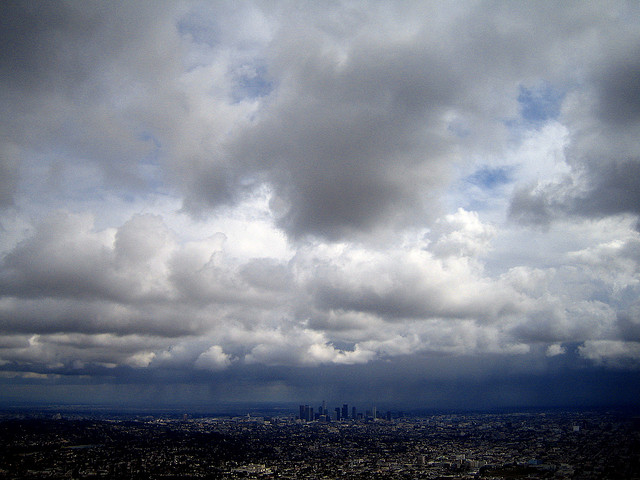 A 57-year-old man was struck by lightning on a golf course in Avalon on Santa Catalina Island as rare summer thunderstorms rolled through SoCal today.

The extent of the man’s injuries was not immediately known as the small number of L.A. County police and firefighters dealt with several simultaneous emergencies on the island, City News Service reported. The sudden storm also caused at least two brushfires on the island as it moved from San Diego and through Catalina at 12:45 p.m. today. In San Diego, storms left more than 1,000 people without power.

The National Weather Service also issued a flash flood warning for south-central San Bernardino County, in effect until 4:15 p.m. NWS said isolated showers and thunderstorms would continue across L.A. County this afternoon with brief but heavy downpours that would cause some flooding of roads. They said a strong thunderstorm was developing at 1:30 p.m. across Torrance, Redondo Beach and Hermosa Beach, impacting traffic on the 405.

Check out Instagram video of the rain in Catalina below:

Update 3:30 p.m.: Reports of the number of people struck by lightning fluctuated, but the latest toll counts at least eight people treated after lightning strikes in Venice, with one person hospitalized for panic, City News Service reports.

One of the people injured was a diver whose photo went viral on social media:

Diver revived after being struck unconscious by lightning at Venice Beach http://t.co/juGqPiC8Gy Pic via @Venice311 pic.twitter.com/s5dmzpnTrG

The lightning strikes in Venice also caused two a power outage, although officials didn't know how many people were affected, according to CBS.

Here's a photo of the scene at Venice:

Update 5:15 p.m.: One of the people hospitalized is now reported in grave condition, City News Service reports. The victim was pulled from the water and taken to a hospital with CPR in progress. Eight victims, including a 15-year-old, were taken to an area hospital. Six of them were transported in fair condition. All victims are now believed to be accounted for, according to Katherine Main of the Los Angeles Fire Department.

Update 5:25 p.m.: Lightning is blamed for a power outage affecting 300 people in Redondo Beach, according to Southern California Edison. The power was expected to be restored by 11:30 p.m., KTLA reported.

Update 7:35 p.m.: The unidentified man in his 20s who was hospitalized in grave condition has now died, the Los Angeles Times reports. Witnesses said the man did not respond to CPR. According to witnesses, the storm came suddenly and lasted about 15 minutes. Seven other people who were injured remain hospitalized, one of them still in critical condition.