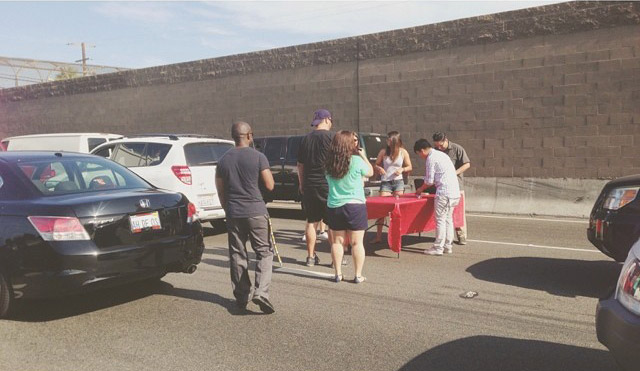 Just your typical Texas Hold 'Em game being played on an L.A. freeway during rush hour (Photo via Sarah Jung on Instagram)

While hundreds of drivers were stuck on the 5 freeway Friday after a man wouldn’t get down from an overpass sign, someone got the bright idea to bring out a poker table and set it up on the freeway.

Intrepid Instagram user Sarah Jung of Los Feliz witnessed the event when she was one of the unlucky people who got stuck while police shut down the 5 in both directions yesterday at about 3:50 p.m.

“These people set up a poker table and suggested that people play Texas Hold ’Em with them,” Jung told the Los Angeles Times.

Jung snapped a photo of the group and posted it to Instagram, which someone then posted to the Facebook page of KABC-TV Channel 7, mistaking it for a pop-up taco stand (somewhere in L.A., someone is getting their taco stuff ready to make this happen). Social media picked up on it and made the imaginary taco stand guy a momentary fake celebrity.

To the taco man that set up shop on the 5 freeway today when it was closed. #YouTheRealMVP pic.twitter.com/gsxDc6tmXS

“Everyone seems to think it was a taco stand,” Jung expained to the Times. “I would love to clear up the fact that it was a Texas Hold ’Em table and not a taco stand.”

The unidentified man on the overpass ledge was finally detained at about 7:15 p.m. and taken to an area hospital for evaluation.

We all have to keep ourselves entertained in such situations. Jung’s boyfriend, Sung-Ho Pak, even posted a video of himself spoofing R.E.M.’s “Everbody Hurts.” (Oh good, we thought that reference was too old to make.)