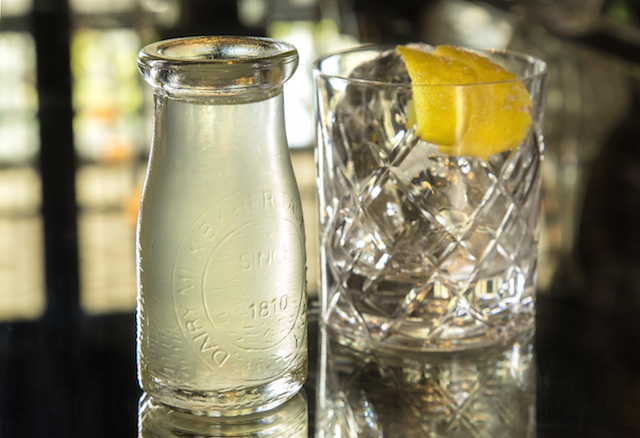 There are a lot of things we love at the new Faith & Flower in Downtown L.A.: the smart art deco meets modern design; the flaming table-side absinthe show; the prayerbook menus with hidden messages from rappers and poets; the fact that "Ratatouille's" menu consultant Michael Hung is the chef; and the reality that the chef's comforting oxtail agnolotti doesn't need any assistance from rodents of any sort.

Those things are all great, but what really stuck out on our first visit was a stellar cocktail called the English Milk Punch.

Admittedly, the idea of milk and booze had us a bit sketched out at first, but it turns out the drink has been enjoyed for quite some time now. The recipe came from the Jerry Thomas bartenders guide from the 1860's, and Ben Franklin even had his own recipe.

"Back in the day, unless you lived in a port city, it was really hard to get fresh fruit, and when you did, you wanted to figure out how to make it last longer," says Lead Mixologist Mike Lay. Enter the punch.

To make this particular English Milk Punch, bartenders break fresh pineapples down and add it to some lemon zest and sugar to make an oleo-saccharum—basically a mix of oil and sugar that was the base of most cocktails in the 19th century.

Once that's done, they add rum, cognac, absinthe, clove, nutmeg, coriander, and bitters as well as some grenadine and some boiling water. They let all the flavors marry in a big vat, then strain it off.

Meanwhile, there's the clarified curdled milk. (We realize things like curdled milk and "oleo-saccharum" are a bit scientific-sounding, but trust.) Once it's strained til it's perfectly clear, all that's left is the lactic acid.

"If you’ve ever had a rich buttery chardonnay or a latte, that richness and mouthfeel is the same thing you get with the punch," says Lay. "There’s no milk flavor."

The two elements are then mixed together to form the perfectly vibrant-yet-smooth tropical punch.

When asked about the odd name and process, Lay, who has also opened bars at Rose. Rabbit. Lie. in Las Vegas and Restaurant 1833, says: "I’ve tried to word it as nonthreatening as possible. And actually, a lot of people come in seeking it out. The pineapple and rum make it approachable. At first we were running out. It's very labor-intensive, and when we sell out, that's it."

Of course, it doesn't hurt that this historically significant drink is beautifully presented. Lay serves the cocktail with a vintage milk bottle sidecar for a classy old-fashioned feel that doesn't involve a Mason jar, thank god. If only history lessons in high school were this delightful.