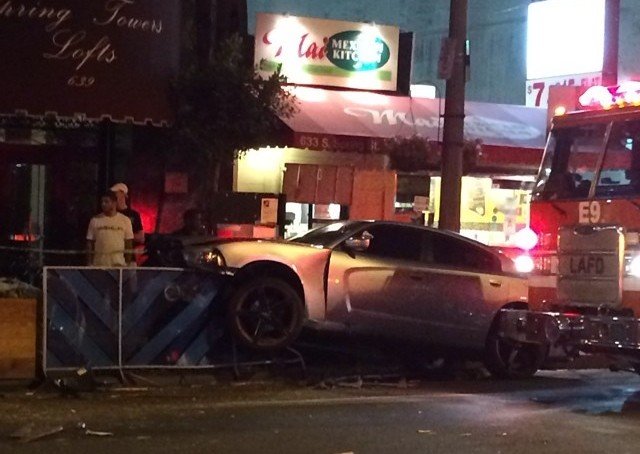 A man who had been thrown out of a downtown club for having too much to drink commandeered his friend's car and wound up plowing through parked cars and a parklet, injuring three people.

The man in his 20s, after being kicked out of a club for being unruly, was being helped into to the car by his friend when he managed to start the car with its keyless ignition and took off down Spring Street around 1:15 a.m. Clipping cars around 7th and Spring Streets, the car finally came to a rest when it crashed into a parklet in front of L.A. Cafe. The man was arrested at the scene, according to CBS 2.

Photos of the thankfully bloodless carnage were uploaded by users to the DTLA Facebook group overnight, with reports of at least four cars and a bus damaged. The crash also raised the question among commenters about the safety of the parklets, with them basically allowing people to sit right in the path of vehicle traffic the fears that they expose pedestrians to traffic even moreso.

Looks like you owe your friend big time, dude.