Weekend Planner: 18 Things To Do In L.A. 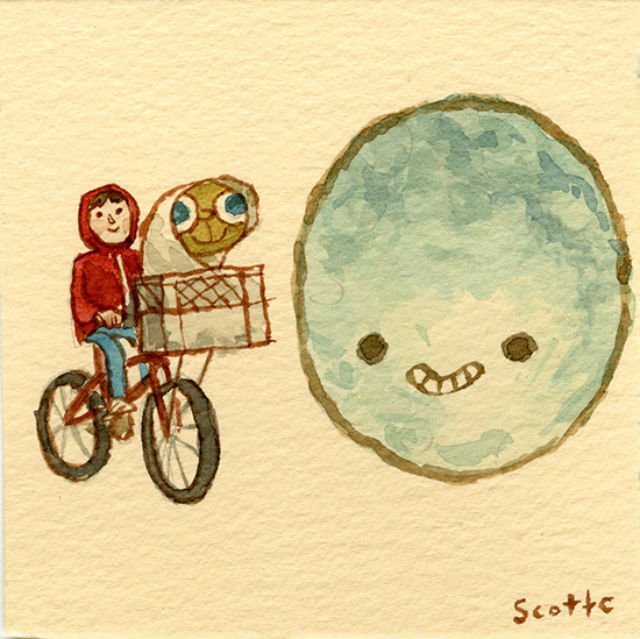 Gallery1988 (West) opens a new show with works by Scott C. (Image: Courtesy of the artist and gallery)

LAist gets a lot of event announcements, and we comb through them all to bring you a curated list of what’s happening in LA this weekend, including these 18 events.

ART: Gallery1988 (West) opens the Scott C show Revenge of the Great Showdowns on Friday with an artist reception from 7-10 pm. The exhibition features more than 200 original pieces and two new print sets of Scott’s work, in which he puts his own spin on memorable movie showdowns. G1988 expects a long line, so get there early.

COMEDY: UCBTLA is unofficially celebrating "Seinfeld Month" to celebrate the 25th anniversary of the show's premiere. Spoiler Country presents an exquisite corpse-type writing experiment in which each writer only got to see the page immediately before the one they wrote. So we hear the script includes an “undead Kramer wreaking havoc through time and space with a wormhole gun, and also Jerry discovers Tinder.” The final script is read/performed live on Friday by UCB performers. At 11:59 pm on Friday and tickets are $5.

THEATER: Wicked Lit presents another immersive theater piece at the Strub Mansion in Pasadena. The troupe presents The Doll, adapted from an original story by Algernon Blackwood, and set in 1931 England. Little Monica receives a mysterious package that turns her family home upside down. In addition, audiences will get a staged reading of the new Wicked Lit play The Shadowy Third. The limited run begins on Friday and shows at 7:30 pm and 8:45 pm. The limited run ends on July 26. Tickets: $25.

HIKE: Hike by the light of Friday’s full moon at Charmlee Wilderness Park in Malibu. The two hour program guides vistors into observing nighttime critters while checking out great views by moonlight. Free.

LIT: C.W. Neill is one of those LA coffee shop denizens who started numerous screenplays and never finished. He channeled his creativity into the blog Untitled Screenplays, and now finally a book This Movie Will Require Dinosaurs. The collection features “ridiculous, bizarre, and over-the-top starts at screenplays that one can imagine. Also included are random doodles and scribbled notes that reflect the intricacies of the ‘creation process...’” Neill reads from his book on Friday at Skylight Books at 7:30 pm.

DANCE DOWNTOWN: It's Bollywood night on Friday at the Music Center, which presents another installment of its Dance Downtown series. Bring friends for beginner dance lessons and DJs spinning throughout. The dancing runs from 6:30-10 pm and no RSVP is necessary.

MUSIC : Saturdays Off the 405 is back at the Getty on Saturday night from with a free outdoor performance by LA’s own Chicano Batman, playing a mix of “cumbia, Mexican ballads, Brazilian tropicalia, Jimi Hendrix, Santana, and Cream.” Also performing: DJ Ervin Arana. Music in the Museum Courtyard from 6-9 pm. Free, but parking is $10 after 5 pm. Food and drinks available for purchase.

BIKING: After being asked to halt their Marathon Crash Race this year, Wolfpack Hustle goes legit this weekend as they bring officially sanctioned bike racing to DTLA on Saturday. The Wolfpack holds its Civic Center Crit2 races around City Hall with qualifying races at 3 pm for pros and amateurs alike, and road finales for women at 6 pm, men's at 6:45 pm and track finales at 7:30 pm (women) and men at 8:15 pm.

MUSIC : At 8 pm, Grand Performances presents Adventures in Paradise: A Tribute to Minnie Ripperton. The ‘70s soul-singer’s tunes are frequently sampled by hip-hop artists, and on Saturday, the Decoders (featuring a 20-piece ensemble and special guests) re-imagine and remix her music. Should be a special night at California Plaza for sure. 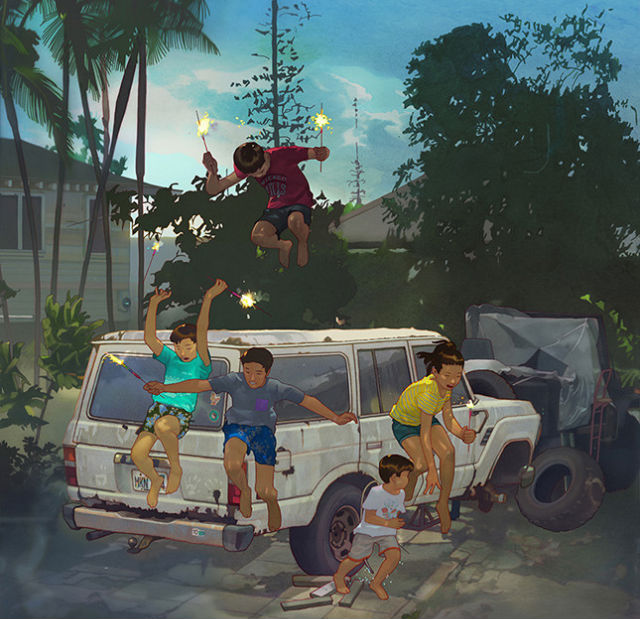 ART : Giant Robot presents Gathering Whispers—a solo exhibition by Edwin Ushiro — with an opening reception at GR2 with the artist on Saturday from 6:30-10 pm.Ushiro’s work is steeped in nostalgia, from a “not-so-obvious homage to Super Sentai (like Power Rangers) to a piece about a bridge built by Okinawan craftspersons that’s been demolished to make way for more traffic. The show remains on view through July 20.

FILM : Richard Linklater’s much-anticipated film Boyhood—tracking a 12-year journey of a young boy growing up—opens in theaters this weekend. On Saturday night, the ArcLight Hollywood presents special appearances with actors Patricia Arquette and Ethan Hawke at the 7:15 pm, 8:15 pm and 9:15 pm screenings. (Oh and if you bring your own childhood photo, you’ll get a free popcorn, too.)

FILM : Etheria Film Night, which is being held at the Egyptian Theatre on Saturday, is a one-night showcase of the best new horror, science fiction, fantasy, action, and thriller films from emerging female directors. Premieres include Axelle Carolyn’s feature film Soulmate with Tom Wisdom (SyFy’s “Defiance”) and Rose McGowan’s directorial debut thriller Dawn. There’s also a screening of short films by women directors. Screenings begin at 4 pm and are $11 per program.

ART: LAXART Gallery opens an LA debut exhibition by a Tel Aviv-based art photographer Orit Raff on Saturday. The images in this exhibit are rooms and spaces “based on novels with cultural, sociological and political references.” There’s a brief Q&A on Sat. at 5pm with the artist (who’s brother, btw, is Gideon Raff creator of the acclaimed drama Homeland). The works remain on view through Aug. 23.

POOL PARTY : On Sunday from 1-6 pm, the Hollywood Roosevelt Hotel at the Tropicana Pool and Bar hold a one-day only photo shoot and party with photographer iO Tillett Wright shooting faces for her Self Evident Truths —for anyone who supports equality with a donation. Hosted by Amber Heard, School Night, Luke Nero, The Grind, Sharpe Suiting, Cultist, Blas Flores, FatherSons, and Carlos Lopez. The party includes a a performance by Ryan Heffiington; DJs include: Chris Douridas (KCRW), Newbody (A Club Called Rhonda), Automaton (The Grind), Josh One (A Club Called Rhonda, Mustache Mondays) and Motion Cntrl (DJ set). The event is free and open to the public. RSVP here.

Is the Man Who is Tall Happy Teaser from Royal Post on Vimeo.

FILM : American Cinematheque presents the film series The Many Moods of Michel Gondry. On Saturday the Aero sceens the double feature, beginning at 7:30 pm with the 2013 animated film documentary on Noam Chomsky, Is the Man who is Tall Happy? It’s followed by Dave Chappelle’s Block Party (2005). Tickets: $11.

JAZZ: The Broad Stage and Room & Board in Culver City present a free jazz performance by Jesse Palter and her quartet at the Helms Bakery store. Try light bites and sip on wine while exploring modern American furnishings. 4-6 pm on Sunday.

SPOKEN WORD: Voices of LA: The Krupnick Festival of the Arts is a citywide, cross-cultural collaborative art series that brings together, art forms and people from different cultures and communities. Throughout July and August, these collaborations will be featured in different venues across LA, from Boyle Heights to Beverly Hills. On Sunday at 4 pm at Beyond Baroque, there’s a spoken word / musical event, Along the Hyphen, that examines life along “some of the many hyphens of identity in Los Angeles - Korean, Jewish, Filipina, Latina and African-American.” Featured artists include: Kamau Daáood, Joseph DeRusha, Marisela Norte, Irene Suico Soriano and Doc Whisper. Free, but RSVP required.