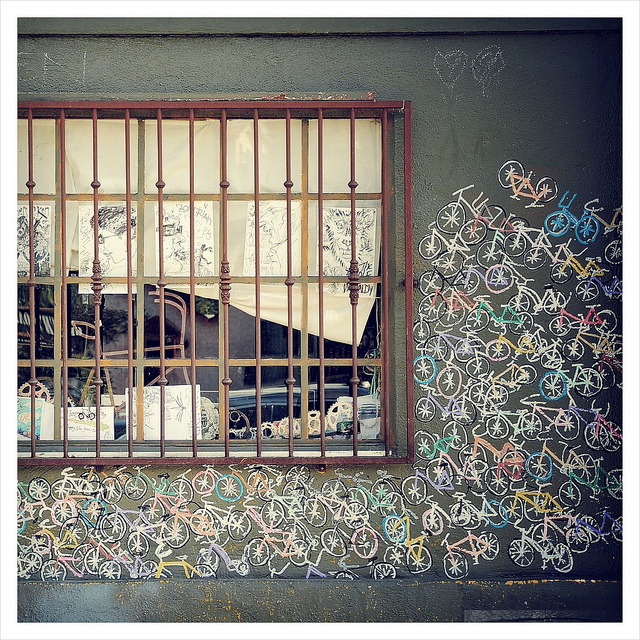 Councilman Gil Cedillo has revoked his campaign promise to back bike lanes on Figueroa Avenue through Highland Park and Cypress Park.

The proposed bike lanes would run from Avenue 26 to Avenue 52 (one of Mayor Eric Garcetti's 15 "Great Streets") and would require one of four lanes being removed for motor traffic. Cedillo put out a statement saying that he was "deferring the implementation of any bike lanes on Figueroa until I can ensure all residents who travel along this corridor will be safe."

That really gets the goat of bike lane backers who point out that the bike lanes were originally proposed by LADOT as a safety measure. Proponents say that bike lanes aren't just good for people who get around by bike—they say it would slow down vehicle traffic that races up and down Figueroa to a pace that would make it safer and saner for pedestrians, too. Some of them marched in front of Cedillo's office this week in Dia De Los Muertos costumes to honor those who had died in collisions with cars on Figueroa. They point out an increasing number of Angelenos are carless, and there are estimates that 1 in 10 families in Highland Park don't have a car. They say bike lanes aren't just good for planning livable communities—good for business. Cedillo the candidate once counted himself among their numbers—there's a video of him waxing poetic about the bike-friendly design of Denmark.

Car owners were unhappy about the prospect of losing a lane to bikers. They were worried about traffic, and unlike some bikers and pedestrians who worry about traffic zooming by, they didn't like the idea of having to slow down. (LADOT estimated the slowdown would cost drivers about 45 seconds.) The debate over the lanes got pretty contentious at community meetings on the issue—when community members were allowed to speak. One Mt. Washington resident said at a meeting this May, "All of you in favor of these bike lanes are young. I’m 50-something and I don’t think I would use those bike lanes."

In 2010, the city approved a plan to increase bike lanes and improve safety for bikers all around town. Rowena and York avenues are some of the places that have had to go on "road diets." Special attention was paid to Northeast Los Angeles, including Figueroa and York Boulevard, according to EGP. The recommendation for a bike lane came from LADOT, and Cedillo said he supported them as a candidate. But as a councilman, he opted to hold community meetings on the issue before deciding to go forward.

In his statement, Cedillo says he supports the other not-so-controversial measures by LADOT, like reconfiguring traffic signals, extending curbs for pedestrians and improving lighting at crosswalks and adding in more bike racks and corrals.