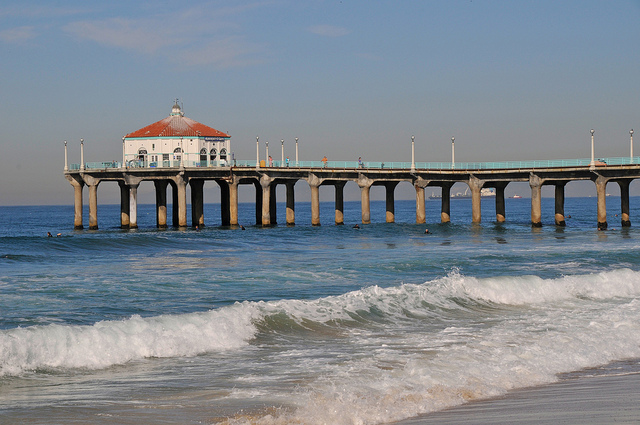 The Manhattan Beach pier, near where the swimmer was attacked. (Photo by bloodyeyeballs via the LAist Featured Photos pool on Flickr)

A swimmer was taken into the hospital this morning after being bitten by a great white shark off the Manhattan Beach pier. This is no hoax.

The swimmer was bitten and was treated by lifeguards and later taken to a local hospital. Los Angeles County Fire Inspector Rick Flores told KPCC that he suffered "moderate bite wounds." Conflicting reports say he was either bitten in his "upper torso" or on his thigh and hand. He is listed in stable condition.

The shark was hooked by a fisherman on the pier at about 9:30 a.m. and the fisherman struggled to reel in the 7-foot fish for up to 40 minutes. The shark was trying to free itself by biting the line when a group of long-distance swimmers, including the bite victim, swam by. In its agitated state, the shark ended up biting the swimmer.

In California, it is illegal to fish for great white sharks.

As a precaution, harbor patrol officers cleared the waters one mile north and south of the attack area, reports The Daily Breeze. Lifeguards were reported to be trying to guide the animal further out into the ocean and away from the beach.

Back in October a local paddleboarder had a close encounter with a similarly-sized great white shark about 200 yards off Manhattan Beach.

Update [2:36 p.m.]: The Los Angeles County Lifeguards tweeted just after 2 p.m. that all areas around Manhattan Beach and Hermosa Beach are now re-opened.