Ben Jaffe And The Preservation Hall Jazz Band Preach The Gospel Of NOLA In L.A. This Weekend 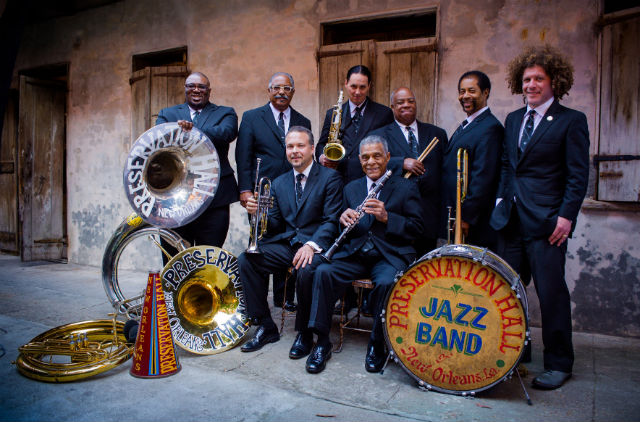 After chatting with Ben Jaffe, musician and creative director of the Preservation Hall Jazz Band, it’s hard not to wonder whether the guy bleeds gumbo. He preaches the gospel of New Orleans, its music and culture and couldn’t be prouder to carry on his parents legacy.

A little background: In 1960, Allan and Sandra Jaffe stopped in New Orleans on an extended honeymoon. As jazz lovers, they followed a few local musicians to Larry Borenstein’s art gallery for a nightly jam session. They obviously were enraptured by what they heard because shortly thereafter they moved to the Crescent City permanently. The Jaffes took it upon themselves to preserve the jazz traditions of many of aging players, so they established Preservation Hall in 1961, at 726 St. Peter’s St., in the French Quarter, where today it still holds jazz concerts more than 350 nights a year. Allan knew that in order to spread traditional Preservation Hall’s mission and music even further, the bands had to tour, so in 1963, the Preservation Hall Jazz Band (PHJB) hit the road.

Fast-forward more than 50 years, and Ben Jaffe balances his duties as leader of both the Hall and the jazz band with those of performer (playing upright bass, tuba, Sousaphone, banjo, percussion, among others). PHJB still plays more than 100 concerts yearly across the globe, in large and small venues alike, including Coachella 2014 as well as the smaller Ford Amphitheatre on Saturday night (July 5).

LAist had a chance to talk with Jaffe about his parents’ legacy, New Orleans music, the PHJB’s first album of original compositions—co-produced by My Morning Jacket’s Jim James—and one song that the band hasn’t played for eight years.

LAist: Is there only one band currently touring under the PHJB mantle?

Ben Jaffe: There were more live touring opportunities for a band like Preservation Hall 45 years ago. There was more work. Sometimes, we would have three bands on the road at the same time. You might have a band playing for a graduation in Colorado, a band playing in New York...it was a different time.”

How many shows do you play on the road and at home?

When we’re home, we play three nights a week in New Orleans. We tour quite a bit, but we’re beginning to slow down since we’ve been going at it so hard since Hurricane Katrina [in 2005]. We’ve been touring, doing 100-plus shows a year on the road and as many shows in New Orleans—200 shows a year is a staggering number for any band.

For us, it was survival. It was us having a way to continue our careers in the face of the rebuilding process. [Preservation Hall was closed for several months after the storm.] Now that we’re in a stable place and the city has come back in such an amazing way, it’s good to step back for a minute and enjoy all the hard work that we’ve put in.

Myself and members of the band were very proud to have been part of that process. We do believe that what we did in the months after the hurricane, and the years after the hurricane, really helped set the tone for the way people would see New Orleans in the future. And that’s something we’re very proud of—that we brought a lot of honor to the way people look at and experience New Orleans today. It’s different. It’s evolved.

Can you talk about the Hall’s mission to ‘protect, preserve and perpetuate?’

That’s our philosophy, not so much a mission. When I look at what my parents created— and what they instilled in me—by establishing Preservation Hall, those were the things that were important to them, without really articulating it.

You wear many hats. Do you consider yourself a musician first? A historian/ethnomusicologist? Conservationist? A producer or director?

I get joy from everything that I do, I get joy from from producing albums and working with musicians and being the creative director and operating Preservation Hall. There’s a great sense of achievement of being able to employ so many musicians and being part of the community. But it’s not just about employing musicians. It’s being involved with their families...it’s one big neighborhood.

My dad [who passed away in 1987] instilled in me an appreciation for work. And very early on he said, ‘Look, you’re going to spend your life doing a lot of shit that you don’t enjoy doing, but you’re going to be doing it because it’s for something you do enjoy.’ I get a lot of joy making the machine work, and it is a machine. And at the end of the day, I just feel blessed that I get to play music on top of all this. I get to pick up my horn and I get to pick up my bass and be part of a community I grew up in.

How are you appealing to a younger generation, who are more into Jay Z, Lady Gaga, Beyonce than jazz?

I think it’s important you broaden your base and reach out and break down walls, break down barriers. Part of what I believe is that if everybody can enjoy music the way we enjoy it in New Orleans, it would solve a lot of problems in the world.

That’s what I think is so unique and beautiful about the New Orleans musical experience. It’s how welcoming it is and how much fun it is. In New Orleans, people still dance to jazz. We listen to jazz on the radio. It’s part of what we do. You might hear Jay Z and Beyonce one second, and then hear a brass band track and then back to Kanye West. In New Orleans we don’t know the difference. We just know good music. And good times. That’s the message that we try and send … you don’t have to be a certain type of person to listen to that. I listen to all kinds of stuff—and no one’s a bigger Jay Z fan. 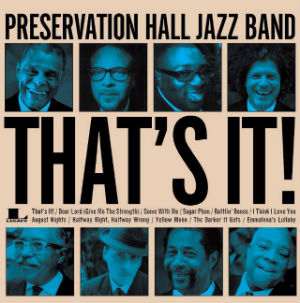 ’That’s It’ is PHJB’s first record of original compositions. Why now?

I think that having our 50th anniversary even allowed us to think that this was possibility. I spent [months] researching material for our 50th anniversary collection. And at the end of that, you start to wonder what else is there for us to do. Where can we go from here? We've done it all. We’ve played every Louis Armstrong track. We’ve played everything by King Oliver. If we keep on this track, performing this music, when will we become a repertory band and end up in a museum somewhere. And that’s one of my greatest fears is that somehow, our music losing some of its street cred in New Orleans. Music in New Orleans is not a museum experience….

If we’re going to be honest about who we are, then we’re going to write our own material. This is where we’re going to take it. We know the repertoire. We know every New Orleans jazz song that’s ever been written. We can play them. Upside down, backwards and standing on our heads and that will always be a part of who we are. That’s about honoring and respecting and perpetuating; but the part about protecting is that our music remains relevant.

What’s the one song you’ll never get sick of playing? Or is there a song you’ve put into semi-retirement?

We put a couple songs into retirement but for different reasons. After Hurricane Katrina, we performed ‘Do You Know What it means to Miss New Orleans.’ There was one night that we played it...it was about six months after the storm and all of a sudden, the magnitude of what happened—well it hit every member of the band at different times— but that night our trumpet player began to sing it, and couldn’t finish it. He broke down and started crying. And then the whole band just kind of fell apart. The song just fell apart. And that was the last night we played that song because it meant something to us, and it became a song that expressed our feelings about our city. And we just never came back to that song song again. That song served its purpose for us, and we just felt [if we played it now] that we’d be doing a disservice to ourselves, the audience and the composition.

Who’s coming out of the Crescent City that we should be listening to?

There’s lots of great musicians coming out of New Orleans. A lot of great young jazz musicians, but some of my favorite musicians aren't necessary jazz. I really like this whole movement of Big Freedia and Katey Red...and there’s a great young band called Hurray for the Riff Raff.

Also, whatever band is playing in that parade on Sunday afternoon that I’m at is the best band in the world….

And do you have any go-to spots here in L.A.?

I’ve got a long history in L.A. There are some places that I love to go. I love to go eat at Musso & Frank in Hollywood. It kind of reminds me of going to Galatoire's in New Orleans. I have my places my dad used to take me when he played in L.A. We used to go to the Watts Towers...and he always wanted to go to Canters.