17 Of Our Favorite Events In Los Angeles This Week 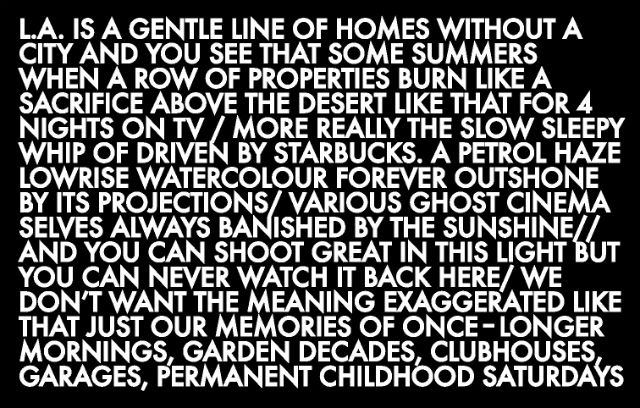 Panel discussion on the billboard art by Robert Montgomery at the Ace Hotel. (Image: Courtesy of the Artist)

LAist gets a lot of press releases, and we go through most of them to curate a list of our favorite events happening in L.A. Here are 17 events you should know about this week. Read on for all the details.

ART TALK: British text artist Robert Montgomery currently has an ongoing L.A. Billboard Exhibition, drawing inspiration from “mass communication and public interventionist strategy.” On Monday at 7 pm, the Do Art Foundation presents the panel discussion with the artist in the program Art Above the Streets: An Evening with Robert Montgomery at the Ace Hotel in DTLA. Music by Lolipop Records. Free, but RSVP needed.

COMEDY: The Seems Legit storytelling show is at Nerdmelt on Monday at 9 pm, with several storytellers/comedians taking to the stage to tell their tales. They’re all true, except one, and you get to call that storyteller out. The lineup includes: Ron Funches, Rick Glassman, Jon DeWalt, Beth Stelling, Melissa Stephens and Moses Storm. Music by Jim Dolore & The Cult of Light. Tickets: $8 in advance, $10 at the door.

COMEDY: Westside Comedy has two free great events on Monday, starting at 8 pm with Lip Sync Extravaganza. Cole Stratton hosts performers who compete against one another “lip syncing infamous rock, R&B, hip-hop, country, dance, pop and klezmer hits from throughout the ages” with the audience picking the winners. It’s followed at 10 pm by Shouts at the Screen, again hosted by Stratton, in which a craptastic movie is shown and everyone is encouraged to riff along. Screening on Monday is Day of the Animals, a 1977 about the environment and animals gone wild.

COMEDY TALK: All Things Comedy (ATC) network presents a live edition of the All Things Comedy Podcast (#1) with Bill Burr, Al Madrigal and special guests on Tuesday at 9 pm at NerdMelt. There’s also an auction of memorabilia from ATC comedians off. The event will be live streamed at https://www.cogo.tv/billandal where fans who can’t make the taping can also bid on auction items and make donations. All of the proceeds will help support ATC network. Tickets: $10.

MUSIC: Skybar’s new outdoor acoustic music series, Tunesday, continues on Tuesday with a live music set by The Kin by the Skybar’s pool. Doors at 7 pm and performance at 8 pm. DJ set from Trinidadsenolia from 10 pm-2 am. No cover, but RSVP.

OUTDOOR CINEMA: Mr. C in Beverly Hills presents a night of Poolside Cinema on Tuesday with a screening of Chinatown. Doors at 7 pm for guests to enjoy cuisine and cocktails poolside, and then the screening begins at 8:30 pm. The movie is free (drinks and food are not). Chairs and daybeds are first-come, first-served.

MUSIC: Start your July 4th holiday early with Steve Martin and the Steep Canyon Rangers featuring Edie Brickell, who play the Hollywood Bowl Wednesday through Friday. They’re joined by the Los Angeles Philharmonic, conducted by John Morris Russel, and the U.S. Air Force Band of the Golden West. Stick around for the fireworks. 7:30 pm. $13-$250+ fees.

COMEDY: On Wednesday at 8 pm, Westside Comedy presents Can I Kick It? The evening is a narrated and “hilarious journey through the Golden Age of hip hop.” Comedians Al Jackson, Joe DeRosa, Tone Bell and Rob Christensen review some choice hip hop videos from the ‘80s and ‘90s. The in-house DJ spins before the show. 21+. Tickets: $5.

LIT TALK: The literary series, The Writers' Room with Reza Aslan, continues at DBA in WeHo. The night features a conversation between writer Reza Aslan (author of Zealot: The Life and Times of Jesus of Nazareth) and playwright, author and screenwriter Liz Meriwether of New Girl. Unlike staid lit events, this one has a house band, cocktails and audience Q&As. Doors at 7 pm and discussion at 8 pm. 21+. Tickets: $20.

TABOO TALES: Listen to Taboo Tales that might shock and/or awe you from storytellers Johanna Stein, Jessie Kahnweiler, Stephanie Phillips, Will Link and Rob Morgan, and from hosts Laurenne Sala and Corey Podell. At the Macha Theatre in WeHo. 8 pm. Tickets: $14.

STORYTELLING: Eat Your Words&#8212;a live storytelling event, hosted by Greg Walloch, is at The Standard, Hollywood’s Cactus Lounge from 8-10 pm on Thursday. The evening features stories that are inspired by a food theme, told by storytellers and comedians with special guest appearances by LA area chefs, bartenders and other foodies. Storytellers include: Kacey Arnold, Beowulf Jones, Melinda Hill, Baron Vaughn and Craig Phillip Conant. Free, but RSVP needed.