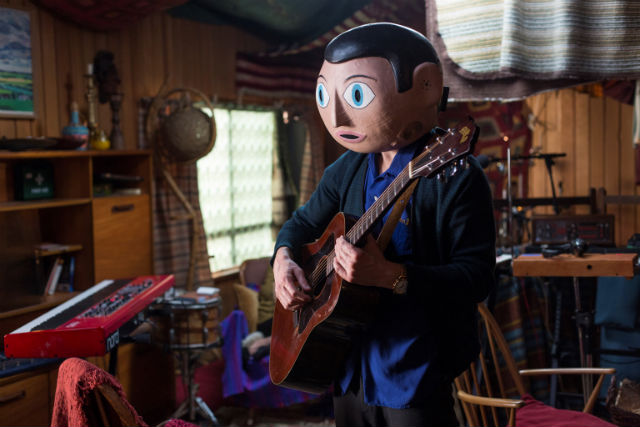 Michael Fassbender is the star of 'Frank.' (Photo courtesy of Magnolia Pictures.)

Now that the dust has settled from Thursday night’s close of the 20th Los Angeles Film Festival, we finally have a little time to look back at several of the films we caught during the festival’s nine-day run. Many of these films are the smaller, quieter ones that fell between the splashy bookends of Bong Joon-ho's Snowpiercer on opening night and Clint Eastwood's adaptation of the Jersey Boys musical on Thursday.

Frank is the comedy-drama in which Michael Fassbender covers his beautiful face by wearing an oversized fake head while fronting an indie band with an unpronounceable name: Soronprfbs. The mask, though, doesn't stop Fassbender from being a totally appealing and engaging lead. He's ably supported by a moody Maggie Gyllenhaal (who rocks the theremin) and two French bandmates Carla Azar and François Civil. None of the band members like the new keyboardist Jon (Domhnall Gleeson) who wants to take the band to bigger places. Frank starts off as a funny, moving film that takes the viewers in unexpected, darker directions. It's a tribute to musicians who care more about music and the process rather than the fame. Frank premiered at Sundance earlier this year and opens in select theaters on Aug. 15. Go out and see it when it opens, Fassbender and Gyllenhaal are worth the watch.

Writer/director Karem Sanga’s The Young Kieslowski is a smart film that addresses the issue of teen pregnancy (and options) with plenty of poignant and realistic moments. Two outcast Caltech kids, played by Ryan Malgarini and Haley Lu Richardson, get pregnant—with twins—the first time they have sex. Now they must break the news to their respective parental units because she wants to keep the babies. Malgarini's character is just too confused to know how to deal with impending fatherhood and acts in a way that's kind of douchey, but somewhat forgivable under the circumstances. Both Richardson and Malgarini give such rich performances that it's totally understandable how the film won Audience Award for Best Narrative Feature.

Another film that examines a couple's relationship is Comet, the first feature film by writer/director Sam Esmail. This comedy-drama stars Emmy Rossum and Justin Long as a couple who meet at Hollywood Forever during a meteor shower. In this modern relationship film (think 500 Days of Summer, just less cutesy) Esmail plays with time in Comet, jumping to pivotal moments in their relationship. The technique is taxing, coming off as disjointed with the story plodding along. While Rossum is captivating, Long's character is wholly annoying, leaving the audience not caring whether the couple stays together or not. And that's problematic for any relationship flick.

Supremacy is a gripping hostage drama about a white supremacist who murders a black cop and takes a black family hostage within hours of release from prison. It's a wonderfully acted drama (based on true events) with Joe Anderson as the ex-con going toe-to-toe against Danny Glover's patriarch. Dawn Olivieri also gives a standout performance as Anderson's coked-up girlfriend. While Taylor keeps the stress levels high during the beginning of the film, Supremacy loses a little steam in the middle. And we're also left with several questions about Glover's family, especially the relationship with his son (Derek Luke) that we wished could have been explored further, but Supremacy remains a taut drama worth seeing.

The Great Museum is a behind-the-scenes documentary about the renovation and reopening of Vienna's Kunsthistorisches Museum. There are moments of humor that director Holzhausen includes: from a museum worker using a scooter to get from one end of his coin archive to another, to another cleaning a large statue',s genitalia, to an executive team discussion on typography for new materials. (We learned that in no matter what country, everyone thinks they're a designer!) Unfortunately, these moments are few and far between. The Great Museum gets slower and slower, crawling toward the end. If anything, we could have used a little more history of the works shown to keep things moving along. On the plus side, the film looks beautiful thanks to the work of cinematographers Attila Boa and Joerg Burger.

'The Last Time You Had Fun' | Director: Mo Perkins

The Last Time You Had Fun is an ensemble comedy tailor-made for the 30-something and older set. The characters in the film are totally relatable, appealing especially to those who are married, formerly married, or have kids. (Once again, our single friends get the shaft.) Two sisters, Alison and Ida (Mary Elizabeth Ellis and Eliza Coupe), are at a wine bar figuring out whether Ida should leave her cheating husband. They run into two Will and Clark (Demetri Martin and Kyle Bornheimer), who are 'celebrating' Clark's divorce. His wife came out as a lesbian. The four hit it off and decide to relive their misspent youth in one night by drinking too much, smoking pot and skinny dipping. The smart script by Hal Haberman is filled with funny one-liners delivered with aplomb by these four seasoned comedians. Add Charlyne Yi to the mix as the foursome's limo driver, and The Last Time You Had Fun turns into an entertaining, though innocuous, comedy.