RIP Power House: The Iconic Hollywood Dive Will Close For Good Next Week 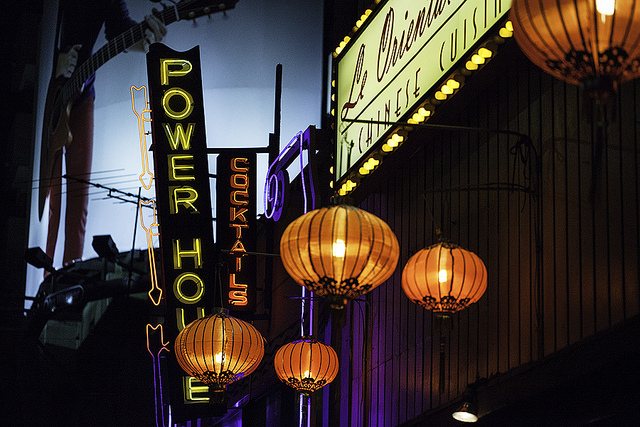 The rumors are true: The Power House, the dive that somehow hid itself in the heart of Hollywood, is closing and turning into some high-end joint where you definitely can't get a PBR for $3.

We got a tip that this tragedy might be occurring, so I decided to go down and do some investigative drinking last night. Jim, who's been tending bar there for a decade, confirmed the rumors. The bar's last night in business is Monday, June 23, and then it closes for renovation. While it will maintain the same ownership, it won't be the same bar, eschewing that hole-in-the-wall feel for something classier, though the details are yet unknown. Whatever it is, it probably won't be what any of the regulars—some have been imbibing here for decades—want.

Gone will be the bare floor, the velvet paintings on the walls, the torn green padding where you rest your elbows. Gone will be the cheap, strong drinks and the analog jukebox playing New York Dolls, Alice Cooper and The Beatles. 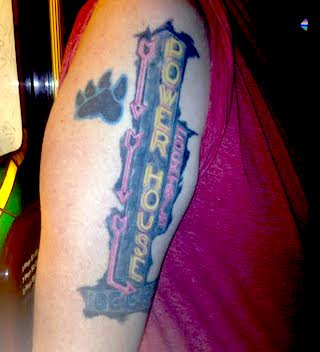 A man had a Power House tattoo on his arm (Photo by Juliet Bennett Rylah/LAist)
Tucked around the corner of Hollywood Blvd. on Highland Ave., the Power House requires a quick dodge from the tourists down the street. The Power House, which opened daily at noon, served the day-drinking denizens of the boulevard; it wasn't totally uncommon to find yourself sipping a brew alongside a superhero or street performer that you might see at the Hollywood Walk of Fame.

Over a cold beer, I asked a couple regulars where they would drink after the 23rd, and none of them had any idea. Frolic Room got half-heartedly tossed around, and Jumbo's Clown Room was acknowledged as another Hollywood institution, but neither have the simplicity of Power House, which has been slinging drinks since the 1950s.

A barfly who had the neon sign of the bar tattooed on his arm proudly displayed his show of loyalty in the light of the jukebox. Another regular told me about a bouncer named Nigel who has since died, but had held his wedding right in the bar. A few guys took up a game of darts, including a man in a wheelchair who uses a rocks glass to prop up a blow gun to play. Jim said he had another rocks glass that was a slightly different size that he could give to the guy to mess up his whole game, but of course, Jim didn't.

While the brick and mortar will remain, it seems like it's time to say goodbye to an old gem.