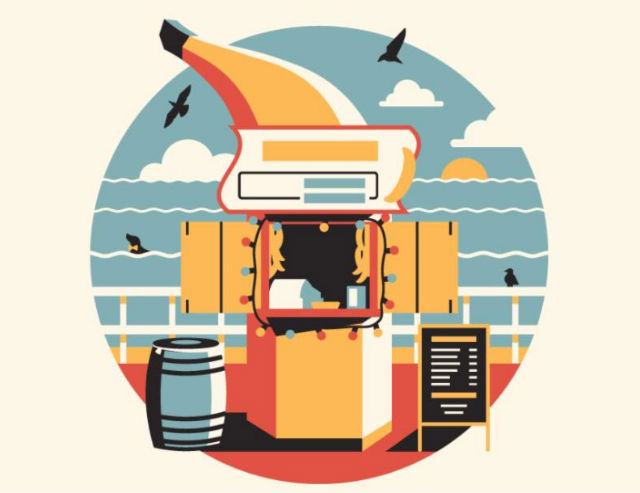 LAist gets a lot of event announcements, and we comb through them all to bring you a curated list of what’s happening in LA this weekend, including these 25 events. And don’t forget that the Los Angeles Film Festival and the Hollywood Fringe Festival are running throughout the weekend, too.

DESIGN: The Los Angeles Design Festival opens on Friday, June 13, and runs through June 29. It’s an annual series of events arond L.A. to celebrate local and interational design talent. The offical opening night event of the festival takes place at Natural Curiosities, Jensen Recreation Center, but there are several other design events Friday, too, including POT and Poketo at the A Line and Shephard Fairey’s Subliminal Projects Gallery.

MUSIC: The indie-rock duo, Thrift, plays Amplyfi in Hollywood (located in an alley behind an Astroburger) to celebrate its new self-titled EP release. Also on the bill are Sueno Eterno, Remington and Anaurac. Doors at 6:30 pm. Tickets: $12.

THEATER : At an Appointed Time is an immersive, theatrical installation created for two to four people at a time. Sounds pretty cool to us: After signing up, guests are given an address for their appointment a tiny dive bar (on the border of Silver Lake and Hollywood). They’re greeted by a stranger who gives them a red envelope with instructions on how to access an adventure in a labrynth of sorts. The experience runs six days a week between June 13 and 26.

MUSIC: Aimee Mann’s in a new rock band—The Both—with indie/punk rocker Ted Leo of Ted Leo and the Pharmacists. They’re playing the El Rey on Saturday in support of their new self-titled album. Also on the bill is Nick Diamonds of Islands. Doors open for this all ages show at 8 pm. Tickets: $25.

SHOP: The Gilt City Warehouse Sale is at Siren Studios on Saturday. Sign up for appointment times to browse, party and shop for clothing, home decor and accessories. Get tickets ($10) quickly before they sell out.

ART: Gallery1988 (West) holds an opening reception on Saturday from 7-10 pm for the debut solo show from DKNG Studios. The exhibit Icon features 50 minimalistic pop culture screenprints (edition of 100), each 12 x 12 inches, and only $25. Many of the studio’s artists are in attendance at the opening. The show runs through July 5.

SEAGAL-A-THON: Heavy Midnites and Ain’t It Cool News present Seagalogy: A Steven Seagal Marathon at Cinefamily on Saturday beginning at 5 pm. An homage to the movie star, musician, aikido instructor and environmentalist Seagal includes some of his finest big-screen work: Hard To Kill, Under Siege 2: Dark Territory, Out For Justice and On Deadly Ground (at approximately midnight). Tickets: $20 / $10 for Cinefamily members.

ART: The documentary Urban Fruit has its L.A. premiere at Beit T’Shuvah treatment/residential center on Venice Boulevard, with the director Roman Zenz in attendance. The film follows a handful of Angelenos who are growing their own food in the city of Los Angeles. Following the screening, there’s a Q&A with food activist and farmer Ron Finley, the founders of Beit T’Shuvah’s Organic Garden Program and Zenz. The event will also have fresh-pressed juice on hand and catered food by Forage, a Silver Lake farm-to-table restaurant featured in the film. 7 pm. A suggested donation of $10 in support of Beit T’Shuvah’s Organic Garden Program.

LIVE READING: Black List Live! presents a live table read of Stephany Folsom’s 2013 script 1969: A Space Odyssey, Or How Kubrick Learned to Stop Worrying and Land on the Moon, a script from the Black List online scriptwriting community. The newly added actors to the cast are Clark Gregg (Agents of S.H.I.E.L.D) as director of the CIA and Aaron Staton (Mad Men) and Rich Sommer (Mad Men) as Neil Armstrong and Buzz Aldrin, respectively. Rounding out the cast are Kathryn Hahn (Bad Words), Jared Harris (The Curious Case of Benjamin Button), Thomas Sadoski (The Newsroom) and Shannon Woodward (Raising Hope). The event will not be filmed or livestreamed. The program, part of the LA Film Fest, is being held at The Los Angeles Theatre. Tickets: $40. Doors at 7 pm and reading at 8 pm.

LIVE PODCAST: Speaking of Gregg, he’s also one of the guests scheduled for Geoff Boucher’s Humans from Earth Podcast series. There are several hour-long segments taped before a live audience at the Spielberg Theatre at the Egyptian with Gregg joining at 3:30 pm and Scott Wilson (The Walking Dead) as Boucher’s guest at 5 pm. Tickets: $7.

FILM + FASHION: On Saturday, the American Cinematheque, Clever Vintage Clothing & the Art Deco Society of Los Angeles present an afternoon of fashion history, a film screening and shopping at the Egyptian Theatre. From noon to 6 pm in the Egyptian’s courtyard is a sale organized by Clever Vintage Clothing with more than 20 vendors (admission to the sale is $5). At 2 pm, there’s an illustrated lecture by clothing historian Dave Temple, "Working Women's Fashion," which explores how working women have influenced fashion from the 1940s to the 1970s There’s a vintage fashion show and a screening of the 1959 film The Best of Everything (with Joan Crawford and Louis Jordan) following Temple’s talk. Tickets: $11.

FESTIVAL: The 23rd Annual Santa Monica Festival is at Clover Park from 11 am to 6 pm. The family friendly event connects “art, culture, food, sustainability, well-being and transportation to daily living through an electrifying array of programs, activities, and vendors.” Expect DIY workshops, cooking demos, live music and a bike rodeo, among numerous other activities. Free.

CULINARY HISTORY: The Culinary Historians of Southern California present Prem Souri Kishore and Farhana Sahibzada, who’ll talk on the topic India and Pakistan: Divided by Borders, United by Taste. They’ll discuss the history of the countries (which were both considered India until 1947) as well as their cuisines. The lecture takes place at 10:30 am on Saturday morning at the Mark Taper Auditorium at the Downtown Central Library. Free and open to the public with a themed-refreshment reception to follow.

HARVEST WORKSHOP : The Natural History Museum presents the hands-on workshop How to Preserve Your Harvest on Saturday from 1-3 pm. Attendees explore the Erika J. Glazer Family Edible Garden at NHM and learn about the various methods and techniques needed to preserve your garden’s bounty (or that of your neighborhood farmers market). Tickets: $20, $15 for NHM members.

FESTIVAL : Mixed Remixed is a FREE new film, book and media festival that celebrates and raises awareness of the mixed heritage experience. It’s taking over the Japanese American National Museum in Little Tokyo on Saturday from 10 am to 9 pm. There are tons of comedy, spoken word, live music performances scheduled as well as workshops and film screenings. The festival coincides with Loving Day on June 12—which celebrates the 1967 Supreme Court case Loving v. Virginia that legalized interracial marriage in the U.S. (Ok our minds were just a little blown by the fact that happened less than 50 years ago!)

MUSIC: The Portland, Oregon six-piece band Ages and Ages headlines the Bootleg on Saturday to support its sophomore record, Divisionary. They deliver up good harmonies with pop and rock, like secular church music or the Spree. Also on the bill are Fathers & Suns (9 pm), Phoebe Bridgers (10 pm). Ages and Ages goes on at 11 pm. Tickets: $12.

FATHER’S DAY: Lots of places are offering up great Father’s Day specials, so if we were to pick just one, we’ll go with Six Taste’s Father’s Day Food Tour of Little Tokyo on Sunday. The walking tour features six stops with beer and food tastings all included for $80 per person. Learn a little history of the area while sampling from Yamazaki Bakery, Fugetsu-Do, Mitsuru Cafe, Oiwake, Mikawaya and finally craft beer and Asian fusion food at Far Bar. The tour starts at 2:30 pm and includes four to five blocks of walking. Advanced purchase is required.

ART: The Hammer Museum’s biennial exhibition Made in L.A. features works by 35 of the region’s emerging and under-recognized artists. It opens on Sunday and runs through Sept. 7. At 2 pm (and again at 2:45), join Connie Butler, Hammer chief curator, and artist Michael Ned Holte (co-curators of Made in L.A. 2014) who’ll lead walkthroughs of the exhibition. Signups for the tours are at 1:30 pm.