The Best Buildings In Los Angeles

Los Angeles may not have the stately skyscrapers that stand up to those of Chicago or New York, but being a younger city lends itself to having "classic" architecture of a more youthful spirit. And if there's one particular thing the region can lay claim to, it's a rich collection of 20th century houses designed by a who's who of architects, including the Eames and even Frank Lloyd Wright. Here are our favorite buildings in L.A., and as always, leave yours in the comments. 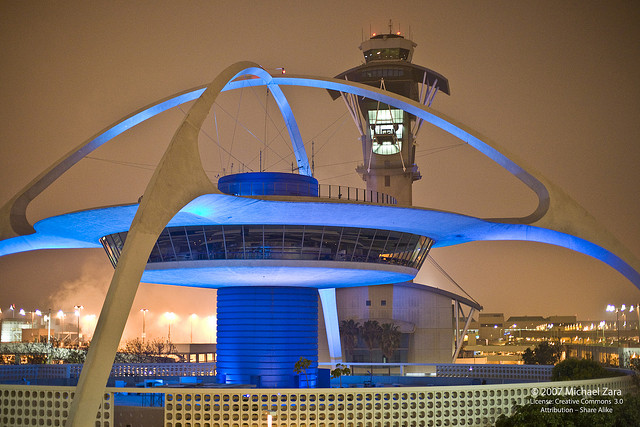 For the over 30 million arriving visitors the airport serves every year, LAX's Theme Building is the first piece of iconic L.A. architecture that they'll encounter up close on their trip. And it's quite fitting, given the abundance of the '50s and '60s Googie-style coffee shops that remain throughout the city, hearkening back to a more innocent Space Race era when both our cars and buildings were made to look like spaceships. The coffee shops may have only had streamlined trimmings to resemble wings, but the Theme Building at LAX truly does resemble a flying saucer, with its flat circular heart and four oversized legs. Sadly, like a few of the coffee shops before it, the restaurant in the Theme Building closed at the end of last year, though its observation deck remains open. —Carman Tse

The Theme Building is located at 201 World Way in LAX. Its observation deck is open from 8 a.m. to 5 p.m. on weekends. 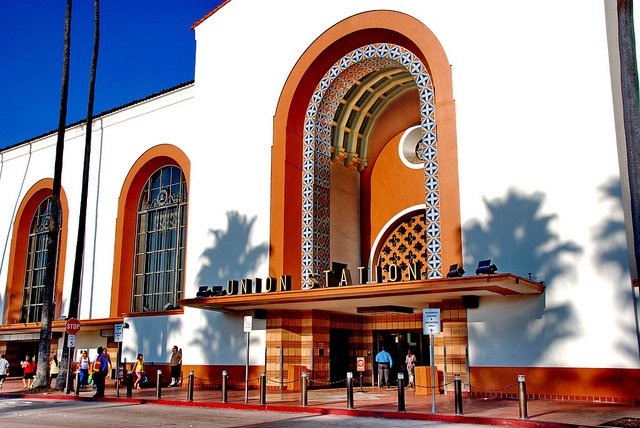 Union Station isn't just any old train stop—it's a historic building that's been around since 1939, and serves as a time capsule to L.A.'s past. It's definitely a place where you can find yourself discovering something at every corner. Its mission revival, Spanish colonial and Art Deco flair designed by father-and-son duo, architects John and Donald Parkinson, make up the signature look, and its grandeur pretty much gave our city the boost of confidence it needed after the Depression. The intricate glass skylight, the Art Deco lamps, leather seats, tiled walls and painted ceilings are all breathtaking details. This bustling stop also was once home to the Harvey House restaurant, designed by Southwestern architect Mary Colter. It inspired the 1946 Judy Garland film, The Harvey Girls. —Jean Trinh

Union Station is located at 800 N Alameda St. in downtown 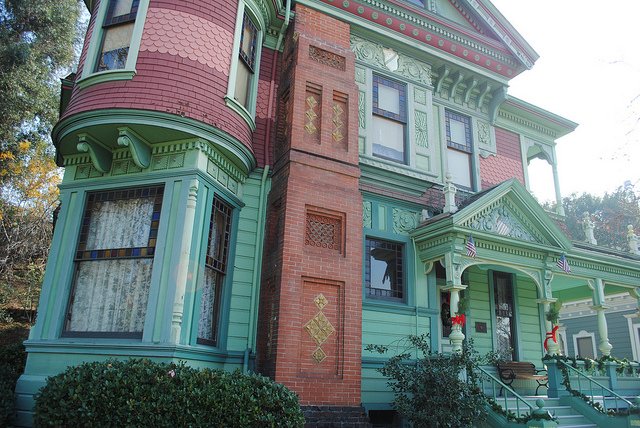 Looking for something to do with mom besides the usual Sunday brunch? You can tour a group of historical homes in the Northeast L.A. neighborhood of Montecito Heights that are located just off the Gold Line and the 110 freeway. The Heritage Square Museum is a group of eight historically significant homes that were each rescued from demolition from various L.A. neighborhoods and restored. The buildings range in style and size, from the simple Longfellow-Hastings Octagon House to the Victorian-style Hale House and extravagant William Perry Mansion, and represent homes built in the area between 1850 and 1950. The houses sit together on acres of period-appropriate manicured grounds and can be toured Friday to Sunday from 11:30 a.m. to 4:30 p.m.—and if you’re lucky, you can catch a living history event, with actors dressed in historical garb. It’s also walking distance from the Lummis House, a gorgeous craftsman home built in the early 1900s by cultural activist Charles Fletcher Lummis. In the spirit of the Arts & Crafts movement, Lummis built the home out of stones from the Arroyo Seco and found objects like old telegraph poles. You can tour the home and its native gardens Friday to Sunday from noon to 4 p.m. —Billy Gil 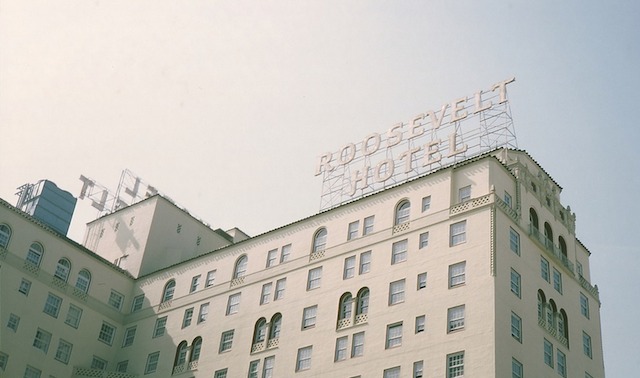 The historic Roosevelt Hotel is a Hollywood staple with its red neon sign rising up over the strip. Built in 1927 and renovated in 2005, the folklore of the hotel says that it’s home to the ghosts of both Marilyn Monroe and Montgomery Clift, both of whom stayed there for extended periods of time. For those of us who identify with Scully, it’s worth stopping by to look at the gorgeous lobby or spend some time around the heated pool in the Tropicana Bar. There are two nightclubs—Teddy’s and Beacher’s Mad House— but if you’re paying the hotel’s prices for a cocktail, it might as well be with your feet dangling in a pool. —Juliet Bennett Rylah 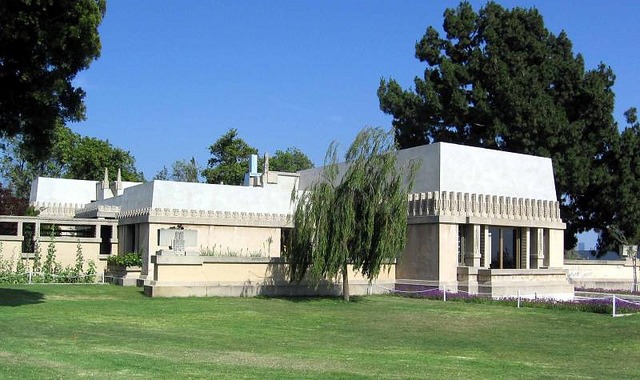 Frank Lloyd Wright built the Hollyhock House for oil heiress Aline Barnsdall from 1919 to 1921 atop the hill now known as Barnsdall Art Park in East Hollywood. The dramatic, byzantine home sits on split levels, features titled walls that give it a Mayan appearance and is arranged around a central courtyard, giving it a palatial feel. Its name comes from the hollyhock flower, the appearance of which inspires decorative elements both outside and inside the home, providing the basis of the pattern for its stained glass windows. It was originally meant to be part of a greater arts and theater complex that was never finished, and Barnsdall ended up donating the house to the city in 1927; however, the original vision has come to life in the park, one of L.A.’s great underrated gems, which offers a museum, a theater and stunning views of the city at sunset. Sadly, the Hollyhock House is currently closed for renovations, but you can still visit Barnsdall Park and see the outside of the unusual home while enjoying the park’s other offerings. —Billy Gil 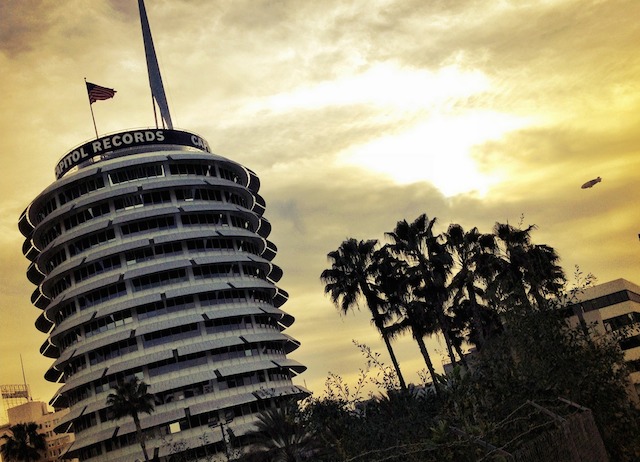 The Capitol Records Building is truly a Hollywood icon. Completed in 1956, this 13-story landmark near Hollywood Blvd. and Vine Ave. is home to Capitol’s West Coast team and recording studios. The blinking light on the top of the spike spells out ‘H-O-L-L-Y-W-O-O-D’ in morse code. There is also ‘Hollywood Jazz,’ a mural in the parking lot featuring Nat King Cole, Ella Fitzgerald and other artists of the time. You may have seen the tower destroyed in 1974’s Earthquake starring Charlton Heston and Ava Gardner, but rest assured, you can take a tour of the building and Instagram yourself in front of it today. —Juliet Bennett Rylah

The Capitol Records Building is located at 1750 Vine St. in Hollywood 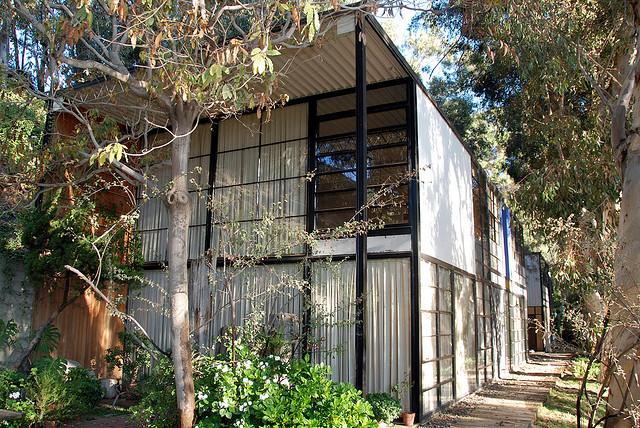 Case Study House No. 8, better known simply as the Eames House, is a landmark of modernist architecture that somehow defies its bold appearance to look cozy and hospitable. Built in 1949 and conceived by the famous husband-and-wife design duo, the Eames home is a testament the accessibility of modernist architecture despite its alienating reputation. The Eames designed the house entirely out of prefabricated materials and with its natural setting in the Pacific Palisades in mind, and it feels right at home despite the right angles and playful colors of his Mondrianesque exterior. Audacious yet also perfectly capturing the chill vibe of the California coast—it is a building that encapsulates LA. Native son Ice Cube would agree. —Carman Tse

The Eames House is located at 203 Chautauqua Blvd. in Pacific Palisades, (310) 459-9663. Only the grounds surrounding the house are open to the public for a self-guided tour, and reservations are required. Click here for more information on how to visit. 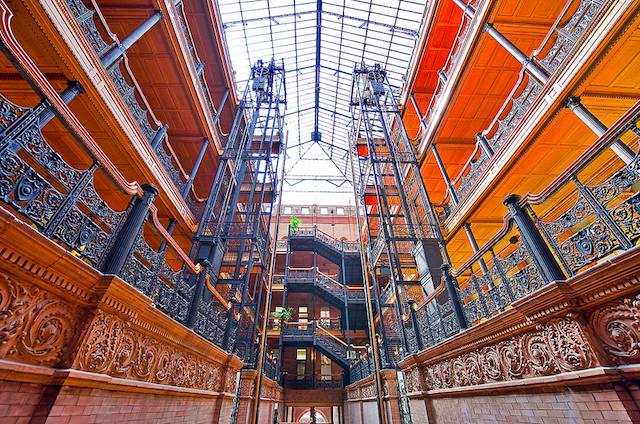 If you've seen Blade Runner, then you'll recognize the Bradbury Building that serves as a backdrop in the iconic 1982 film. The landmark that has been standing for more than a century was built in 1893 by the request of L.A. millionaire Lewis L. Bradbury. And it was based on an 1887 sci-fi story by Edward Bellamy called "Looking Backward" that imagined an office building with a hallway full of light. When you walk into the building, you feel like you're in a hazy dream with the natural light flowing through the court. Its design is of Italian Renaissance and Romanesque Revival and has ornamental iron-work, decorative terra cotta, marble and tiles throughout. Looking up, you can see gorgeous stairs that climb up its five-story courtyard. —Jean Trinh 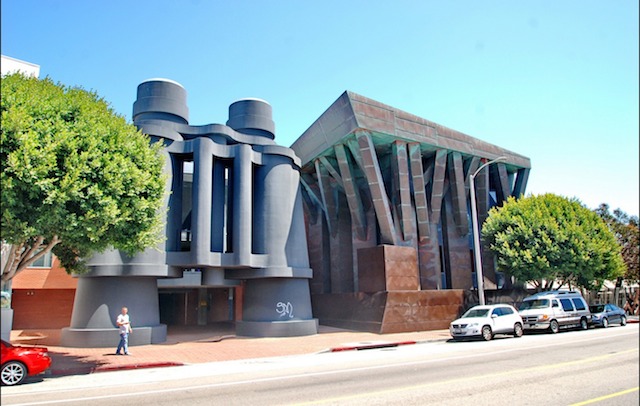 This building was originally known as the Chiat/Day Building, but is now known as the Binoculars Building, for obvious reasons. The building was completed in 1991 and designed by Frank Gehry (who also designed the Walt Disney Concert Hall in DTLA), but the binoculars were designed by husband & wife team Claes Oldenburg and Cooseje van Bruggen. The current inhabitant of the building is none other than Google. And while you have to have an ‘in’ at Google go inside, you can still see the binoculars right on Main St. in Venice. —Juliet Bennett Rylah

Binoculars Building is located at 340 Main St. in Venice 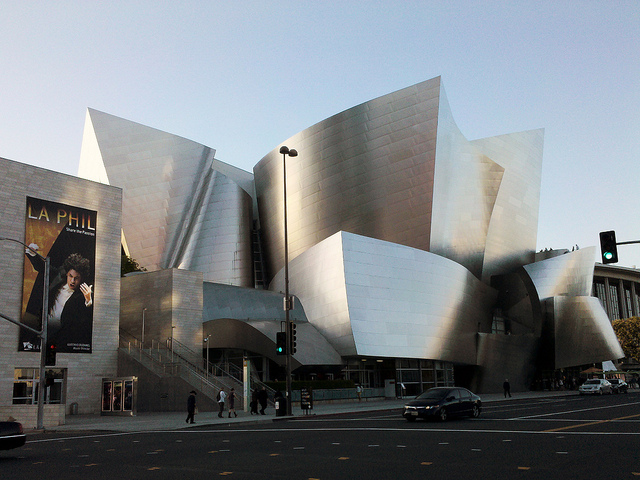 You really can't drive by the Frank Gehry-designed Walt Disney Concert Hall in the heart of downtown without noticing it. The stainless steel that makes up this expansive concert hall curves like giant ship sails. It was so shiny that in fact, the architects behind it had to dull out the metal because the reflective light was so glaring. It's something that took 16 years to make and was finally completed in 2003. (You can check out an awesome time-lapse of its construction here.) Inside the venue (which, by the way has the most amazing acoustics), a 6,134-pipe organ sits against the wall, resembling stacked french fries, which is how it's often referred to. If you get a chance, check out the L.A. Philharmonic there so you can bathe in the building's beauty inside. —Jean Trinh