The Best Bars To Watch The World Cup In Los Angeles

We might not be able to get out to Brazil this year, but that doesn't mean we won't be cheering our hearts out while watching the World Cup at some bar in Los Angeles. There's nothing better than being in a room (with a pint of beer in hand) with equally passionate fans, donning your team's jersey and colors, and waving your country's flag around like a madman. (Hopefully, we won't have any vuvuzelas this time around.) The first match kick starts on June 12 and the rest of the games run until July 13. Here are our favorite pubs around town that will be opening early for the matches and offering some delicious grub (like fish and chips and bangers and mash) and a selection of brews. Let us know your favorites in the comments. 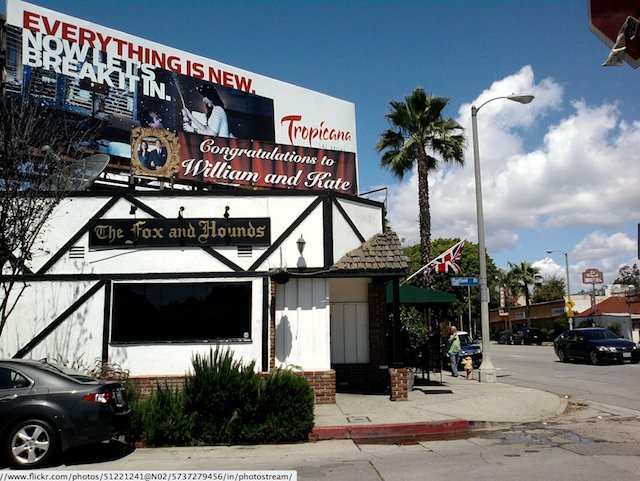 The Fox And Hounds

The Fox And Hounds is a true soccer bar first of all, and the sort of joint where British expats can feel at home. They've got two big-screen TVs and plenty of smaller screens around the walls. You can grab a stool by their wooden tables, sip a pint of their pretty affordable brews and ciders, and order from their extensive English pub menu (including a chicken curry pie or the vegetarian shepherds pie for the herbivores). They'll have beer specials, like half-off certain brews during the World Cup. And you can be sure they'll be opening up early to show every soccer match. However, for some of the more popular games, they'll be selling placeholders to guarantee a spot. You'll have to pay $10 in cash for a ticket, and that money will go towards your food-and-drink tab at the end. They expect the seats to sell out, so check their schedule here ahead of time.

Turns out that Goal Sports Cafe's chef, Jonah Johnson, is the personal chef to Leonardo DiCaprio, so you know the food here is pretty decent. It's the type of bar with comfy, red leather booths, and wall-to-wall TV screens—so you don't have to worry about some dude blocking your view. For the World Cup, they'll be opening early at 8:30 a.m. for all the games, and at noon on opening day. And just for this momentous occasion, soccer fans will get to enjoy the international beers they've been rounding up, including Stella Artois, Peroni, Harp, Guiness, Palm, Rodenbach, Hoegaarden and Heineken. There will be $7 shot and $7 cocktails deals on Patron Silver and Patron Cafe, and they'll be busting in Leblon Cachaça, Brazilian liquor as well to be in the festive spirit.

When we think of Lucky Baldwin's in Pasadena, the first thing that comes to mind is their extensive beer list—especially the Belgian beer they have behind the counter. Also, you can expect British pub fare at the bar, like fish-and-chips. If you don't feel like holing up in the darkness of the bar, feel free to sit outside in the dog-friendly patio. They're already open at 8 a.m. normally, so that will be perfect for when the first matches start in the morning—and yes, they have plenty of TV screens. 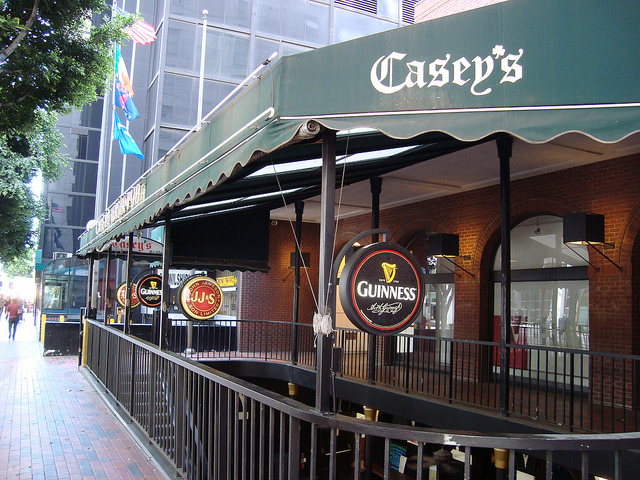 Casey’s Irish Pub downtown is a great bar for sports. It's got pub and traditional Irish fare, frosty beers, an extensive whiskey list, that varnished wood aesthetic and a solid happy hour. Casey's will be playing the games on 12 screens and opening at 9 a.m. for the early games. Happy Hour is from 3 - 7 p.m. and all day on Sundays and Mondays. Specials include $1 to $2 off drinks, $5 Jameson drinks, $1 fries and $3 onion rings. —Juliet Bennett Rylah

When you watch a soccer match at the Village Idiot, just know you're going to be in good company with some hardcore fans. We've seen people wear their favorite team jerseys, wave flags and blow vuvuzelas at this English pub. They also reserve their TVs for just soccer games, so you know they mean business. And there's plenty to grub on in this cozy bar that opens at 8 a.m. during the World Cup, with a full brunch menu starting at 9 a.m. If you're looking for some old-fashioned British fare or more kicked-up gourmet items, they've got you covered. Pro-tip: try the veggie pie or steak-and-potato pie, and the spicy tequila-and-serrano-chili Hot Flash cocktail. And show up early because they don't take reservations.

Highland Park's neighborhood gastropub, the York, is one of the trendier (and pretty hipster) bars to watch the World Cup at. The vibe is pretty chill there, the decor is chic, and you don't feel claustrophobic because of the building's high ceilings. They'll be opening up early for all the first matches of the day and setting up a flat screen TV and big projector screen for the games. And if you have a hankering for a truffle grilled cheese or Cuban sammie, you're in luck. 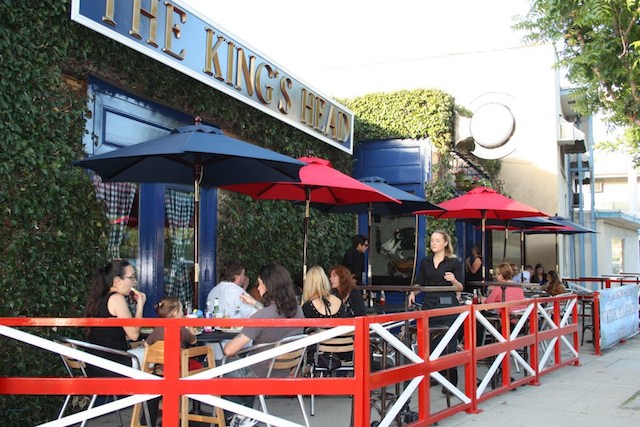 The King's Head in Studio City (Photo via Facebook)

Sometimes you just need a good ol' British pub to make you feel at home with your other fellow soccer fans. At Ye Olde King's Head, they'll be opening up early at both of their locations in Santa Monica and Studio City just in time for the 9 a.m. matches. You can get expect a pour of Guinness to go along with your UK meals—like bangers and mash, Scotch eggs, and black pudding. It's the type of dimly-lit place where you definitely don't have to dress up, there's plenty of seating and lots of TVs. And if you need to take a breather from the intensity of the games, there are some outside patios where you can get some fresh air.

What makes Springbok stand out is that they serve South African food, and it's pretty damn tasty. Folks in the Valley love this spot because it's the kind of neighborhood dive bar that's perfect for watching sports and just has an all-around great atmosphere. They have tons of TVs and it's the type of place that gets packed with soccer fans.

At O'Brien's, you can pull up a bar stool and sit at the bar while you chat with the friendly staff and barflies. What makes this bar special is that they're not just serving your run-of-the-mill beer—they rotate out specialty brews. You can also get some Irish staples such as corned beef and cabbage, fish and chips, and even shepherd's pie. They'll be opening early at 9 a.m. for all the games, which you can see on their 14 TV screens. 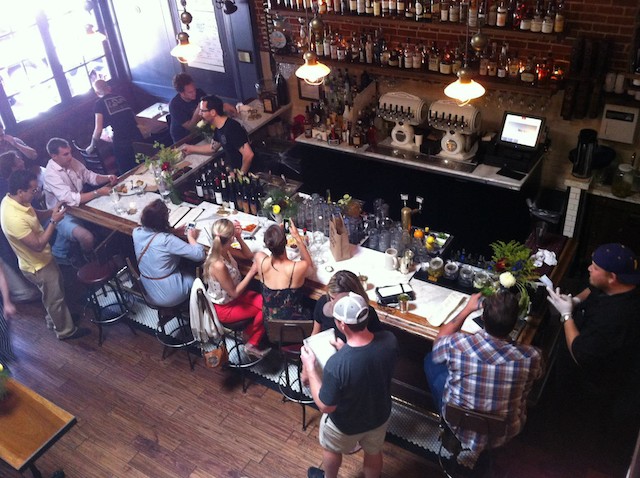 Franklin Village’s Franklin & Co. will be opening their bar at 9 a.m. on game days and serving up brunch starting at 11 a.m. This neighborhood gastropub has a rotating selection of craft beers, but also serves wine and classic cocktails. If you’re feeling particularly festive, you can get their $15 The Bloody Royale. It’s a bloody mary garnished with a meal, with items including a bacon wrapped jalapeño and a slider. —Juliet Bennett Rylah

Jameson's Irish Pub is a sweet relief from the craziness in the heart of Hollywood. It's the type of place where you can relax and grab a black-and-tan or even something from their long list of Irish-themed specialty drinks with names like Irish Rose, Bloody O'Mary, and Clover Cocktail. (We love a little creativity.) Plus, they have a pretty decent food menu with a variety of prime rib specials and Irish nachos. Even though they're only opening at 9 a.m. on Fridays and Saturdays for the World Cup games (which works for you 9-to-5ers), they'll be open at 11:30 a.m. on other days, so you can catch the second games of the day. But the main reason we included them on this list is that their daily happy hour specials are crazy good—from noon to 8 p.m. you can get 2-for-1 drink specials on every drink in the bar.