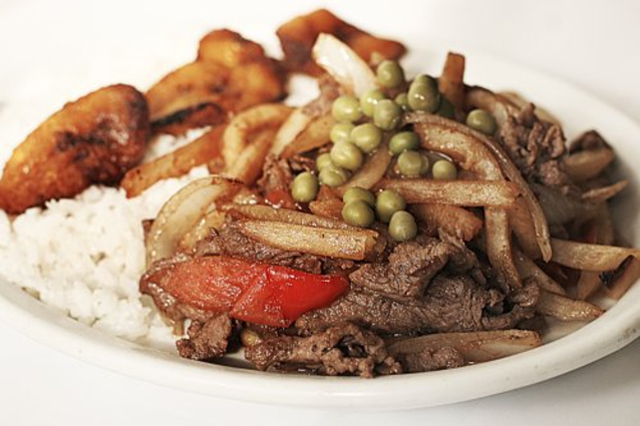 Cuban food is known for its succulent pork dishes, savory black beans and sweet plantains. There are a number of great restaurants in the city, and we’ll get to that, but first, a little history …

Cubans have been present in Los Angeles in significant numbers since the early 1960s. Many middle-class Cubans fled the country after Fidel Castro’s rise to power in the late 1950s and the United States’ unsuccessful Bay of Pigs invasion of Cuba in 1961. Though the resulting Cuban American population is most prevalent, and most often associated with, South Florida and New York, a sizable Cuban population took root in Los Angeles as well, namely in Echo Park, according to KCET. There’s even a statue of Cuban national hero Jose Marti at Echo Park Lake. Today, some 80,000 Cubans live in the Los Angeles area.

Though Echo Park is long from its days as a so-called “Little Havana,”, Los Angeles still has a number of amazing Cuban restaurants. Cuban Americans have spread throughout the city and their cuisine has been integrated into the greater culture, meaning that no matter what part of town you live in, you're never too far from mouthwatering lechon or ropa vieja. Here is a list of some of our favorite spots, compiled by our resident Cuban-American writer. 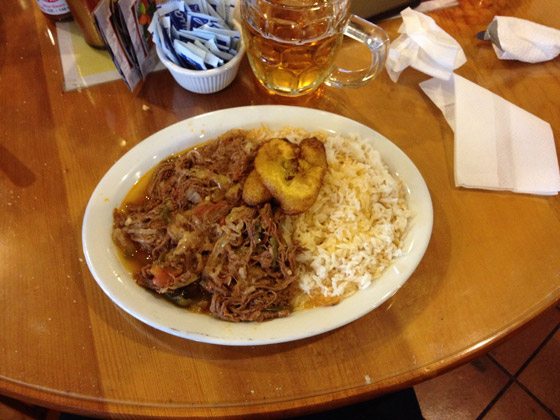 Perhaps our favorite Cuban restaurant in L.A., this Echo Park establishment is as down-home as they come. Savory bistec empanizado (breaded steak) and delicious black beans with a drizzle of olive oil are some of the menu's strong points, and you'll never spend too much if you stick to the daily specials, with revolving dishes in the $8 to $12 range. Though there are some Caribbean and Spanish dishes on offer, the main attraction is their ropa vieja, an iconic Cuban dish of shredded skirt steak marinated in a tomato sauce. It’s just right—not too tomatoey and savory but not too salty. 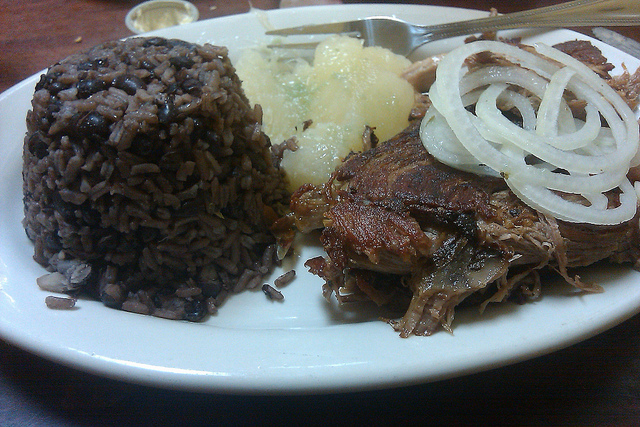 Located just blocks away from La Caridad, El Cochinito has been serving Silver Lakers delectable Cuban dishes since 1988. Chef and owner Gladys Gutierrez utilizes the knowledge gleaned from growing up in her father’s café in Havana. Twenty-six years later and she’s still going strong. Slightly pricier than La Caridad but equally delicious, El Cochinito’s special is the lechon asado (slow-roasted pork), which is so tantalizingly juicy that we can’t finish typing this sentence without our mouths watering. 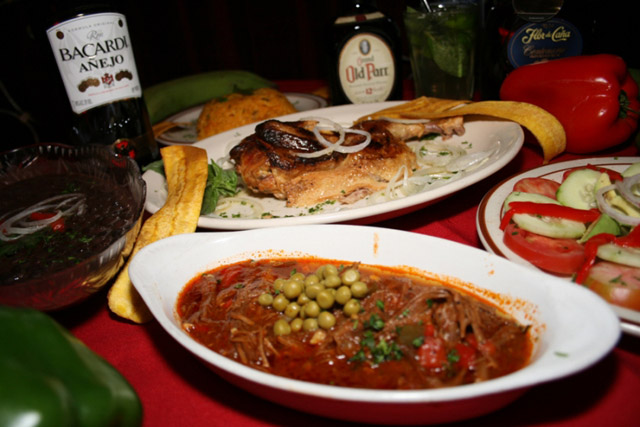 El Floridita is an old-school Cuban joint in Hollywood where you can get a salsa lesson on the right night. Head over on a Friday and Saturday, grab a mojito, and feel like you're in old Havana. For food, check out the aforementioned ropa vieja, giant bistec empanizado or mouthwatering churrasco steaks (Note to vegetarians: You’re gonna be pretty out of luck with Cuban food. Lo siento.) 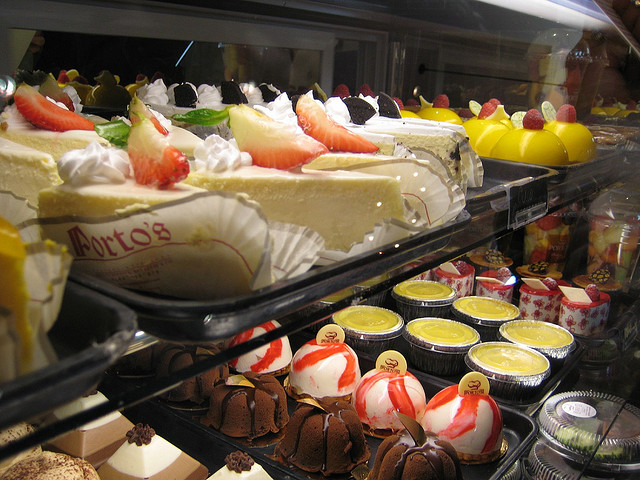 Can we be blamed for including Porto’s on this list, even though it’s more of a bakery than an actual restaurant? Anyone who has tried a pastry from Porto’s is pretty much changed forever. From ground-beef-filled savory pastries and fried potato balls to guava-stuffed sweet pastries and café con leche, everything from Porto’s is spectacular. Avoid the line for takeaway pastries, which seems to be out the door no matter the time of day, by ordering and dining in at their sit-down space next door. They have locations in Burbank, Glendale and Downey, all of which are equally packed on any given day. 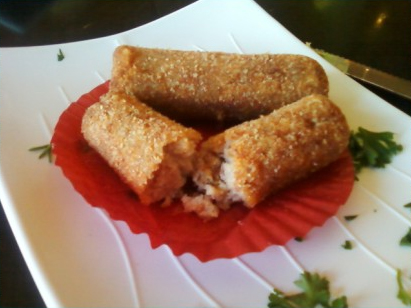 With all due respect to Porto’s, those in the know are aware that it’s worth the drive to head to Tropicana Bakery in Downey if you're after a mind-glowingly good Cuban meal and authentic pastries. Pretty much all of the pastries are superior to ones you’ll get elsewhere in SoCal, including the ham-filled croquettas, which we could probably eat 20 of in one sitting. Tropicana also serves great meals, including delicious moros (black beans and rice) and, our personal favorite, the fried pork chunks. 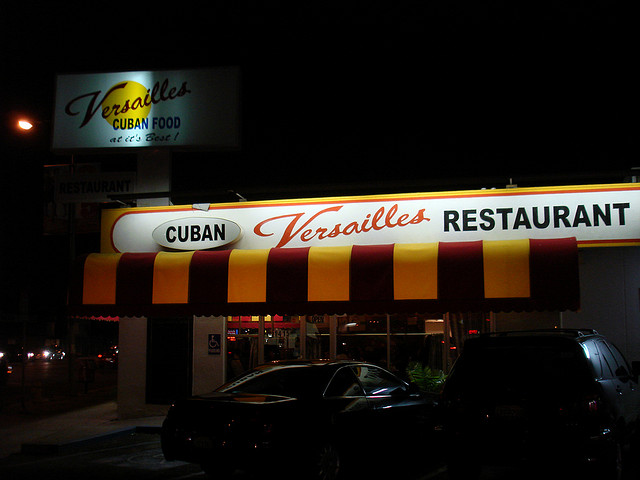 Versailles is perhaps the best-known Cuban restaurant in SoCal, with four locations across the city. The Palms location is the original and perhaps the best, with a spacious floor plan and plenty of seating. Their comprehensive menu has all the favorites, including great versions of all the aforementioned dishes, plus a spectacular garlic-roasted chicken topped with a heap of raw onions and served with a side of black beans and fried plantains. For the more adventurous, check out their beef tongue and their oxtail stew, but the star attraction is the addictive and pungent garlic sauce they smother all over the chicken and pork dishes. It’s so good that even Dame Helen Mirren loves it! 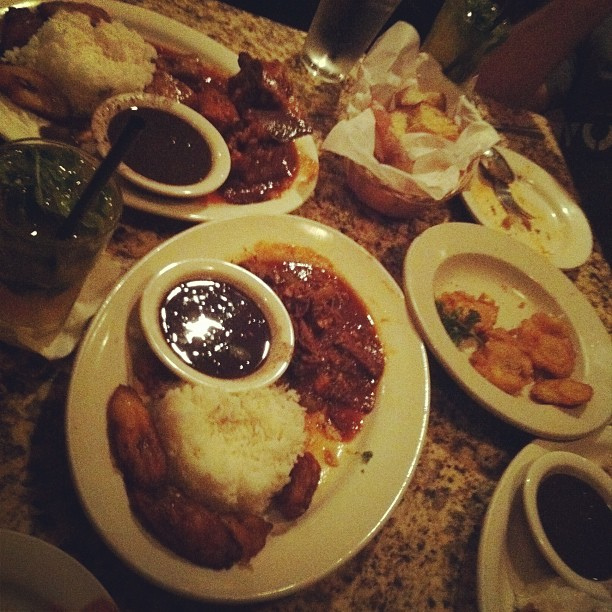 Thankfully for the folks living in the South Bay, there's a better alternative to the subpar Versailles location. Just off the 405 at Inglewood Boulevard, Havana Mania's is cozy, yet lively, with live music on some nights. Everything we’ve had has been pretty superb, so it’s tough to pick, but standbys like ropa vieja, bistec empanizado and picadillo (Cuban hash, made with ground beef) are all good. Their minty mojitos are a must. And if you’re not feeling like Cuban food, their fried rice is also pretty killer. (Our Cuban mom tells us there's a sizable Chinese population in Cuba, and fried rice is served in restaurants all over the island.)

If you want to make the drive out to Van Nuys (or you're already there), El Criollo is well worth the trip. All of the favorites are here—ropa vieja, pollo asado (roasted half chicken with garlic and lemon sauce) and plenty of fish dishes for pescatarians—plus pastries that rival Porto’s. If a drive out to Van Nuys ain’t your thang, there’s also a Burbank location.

Your options for Cuban food are truly vast in the Burbank and Glendale area—there’s Porto’s, El Criollo, Mambo’s Café, Las Palmas, La Cubana and the No Jodas! Cuban food truck. One of the best options is La Bamba Island Cuisine, which has a fun island atmosphere and offers alongside the usual meals atypical offerings for a Cuban restaurant, such as lobster burritos, sweet potato fries and carne asada grilled cheese. We didn’t say it was the most authentic, but it's still darn tasty.

If you want to get really legit about it, go to El Colmao, which has been around since the ’60s. Our Cuban mom tells us this is the place Cuban refugees in L.A. would come after they migrated here during that time. Stick with the basics here—bistec empanizado, platanitos (fried plantains), grilled pork, rice and beans, Cuban sandwiches and flan for dessert. Some things are best left as they were.