The $1 Billion Plan To Make Over The L.A. River Is Looking Likely 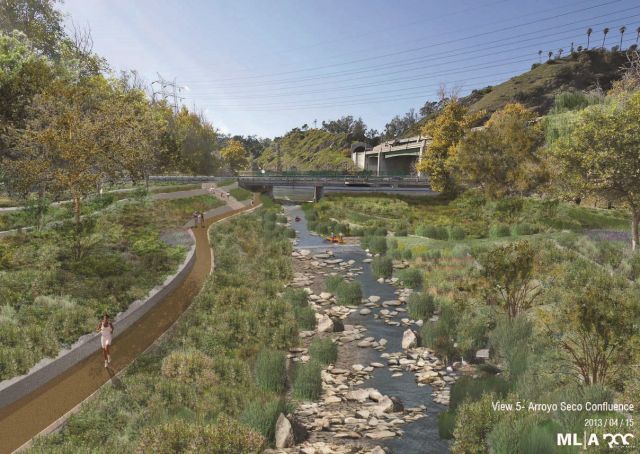 An artist's rendering of what the Arroyo Seco Tributary may look like if the L.A. River Revitalization Plan is implemented. Photo courtesy of lariverrally.org

It's far from a done deal, but the $1 billion (okay, technically, $1.08 billion) plan to transform the L.A. River from a concrete channel to a legit destination is looking a little more likely thanks to support from the federal government.

Mayor Eric Garcetti has been pounding the pavement in DC hoping to find support for his plan to make over 11 miles of the river north of downtown. His plan would widen the river and restore the habitat so it would be a place people would actually want to visit. At the same time, he wants to make it easier to access so we can bike, fish and kayak around the river. The plan is ambitious, but it's supposed to kickstart an even bigger effort to revitalize all 51 miles of the river.

The Army Corps of Engineers liked the idea in general but initially wanted a cut-rate $453-million alternative. They changed their mind and announced yesterday that they would recommend Garcetti's version. Congress will ultimately decided whether the project will get funded, but the Army Corps' recommendation carries a lot of weight, according to the Los Angeles Times. Most of the money for the project will come from the Army Corps, as well as the Department of the Interior and the U.S. Environmental Protection Agency. Local and state sources will chip in, too.

This plan will restore 719 acres and remove three miles of concrete. It will also connect the river to the Chinatown's currently closed-for-maintenance Los Angeles State Historic Park and the Verdugo Wash. Some of the streets that dead-end just before the river will be transformed into access points.

Garcetti's hope isn't just that Angelenos will get to enjoy our river again, but that it will spur a boom in development. And that worries environmentalists and the low-income residents that already live along the river, particularly Elysian Valley. Last week the Times noted:

As inviting as the changes are to many Angelenos, they are not universally praised. Rents are rising sharply in river-adjacent communities, many of them home to low-income residents who say they have heard nothing from the city to ease their fears of being forced from neighborhoods they will no longer be able to afford.

And some environmental groups that worked for years to revive the river say they are losing their voice to development interests and their allies in City Hall. Developers want to reshape the corridor for profit and not necessarily to enhance the river for everyone to enjoy, the groups say.

Related:
Two Sections Of The L.A. River To Re-Open Tomorrow For Kayaking, Fishing