Two Sections Of The L.A. River To Re-Open Tomorrow For Kayaking, Fishing 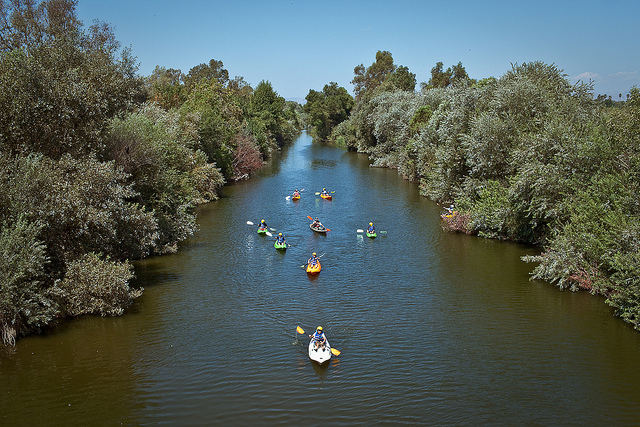 After a "hugely successful" pilot program last summer that opened up a stretch of the Los Angeles River for public recreation, Mountains Recreation & Conservation Authority is re-opening portions of the River for recreation and have added another stretch in the Sepulveda Basin.

*something something* "LA has a river?!"

The Elysian Valley River Recreational Zone and Sepulveda Basin River Recreational Zone will officially open tomorrow all the way through Labor Day, and will be open daily from sunrise to sunset for general public to kayak, fish, or walk along the banks within the managed zones. Motorized boats are forbidden and no permits are required.

For the urban warriors who are a little inexperienced in navigating the wild rapids of SoCal, guided tours will be available, from L.A. River Kayak Safari in Elysian Valley and L.A. River Expeditions in the Sepulveda Basin.

Eating fish sourced from the LA River may not sound immediately all that appealing or safe, but a study commissioned by Friends of the LA River found that the fish are probably safe to eat, though it's probably wise to not make a regular habit of it.

Although the LA River is largely That Giant Concrete Ditch to most people, including native Angelenos, it is important to remember that stretches of it remain in a somewhat natural state. MRCA Chief Ranger Fernando Gomez reminds kayakers that stretches of the Sepulveda Based Recreational Zone will have restricted pedestrian access to protect endangered bird species, according to KCET.

So if you're sick of life in the Big City this summer, just remember that nature is just a short drive away (through a few miles of terrible traffic)!