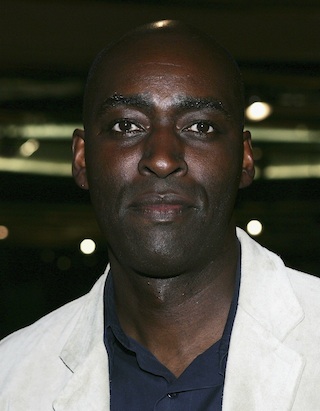 Michael Jace, an actor in "The Shield" (Photo by Kevin Winter/Getty Images)
The Shield actor, Michael Jace, was arrested early Tuesday morning on suspicion of murder after his wife was found fatally shot in their Los Angeles home.

Police arrived at the couple's home on the 5400 block of Brynhurst Avenue in Hyde Park around 8:30 p.m., Detective Sal LaBarbera with the LAPD told KTLA. They found that the actor's wife, 40-year-old April Jace, was shot multiple times.

Michael Jace, 51, was outside of the home when police arrived. Law enforcement sources told TMZ that Michael Jace had called 9-1-1 to report the shooting, and told police, "I shot my wife." Authorities detained him and then arrested him around 2:15 a.m.

April Jace and her two sons, who are both under 10 years old, had just arrived at their home shortly before the shooting. According to TMZ, sources said that the kids witnessed the incident.

"They were not physically hurt, but obviously their emotions are running high," LaBarbera told KTLA. "Two young children that lost their mom and their dad is in jail, most likely will be in prison for this."

LaBarbera said that neighbors weren't aware of any domestic issues with the couple, nor have they had a history of police calls.

Michael Jace was booked at the LAPD’s 77th Street Station and is being held on $1 million bail.

The actor portrayed an LAPD officer Julien Lowe on FX series The Shield from 2002 to 2008. He's also starred in Southland and Forrest Gump.