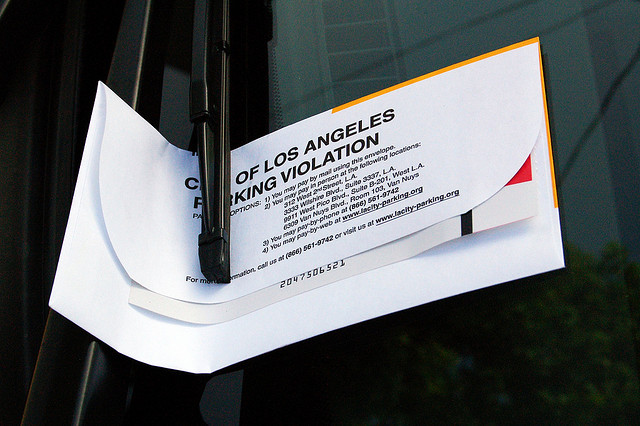 Was this ticket part of a quota? (Photo by Atwater Village Newbie via the LAist Featured Photos pool on Flickr)

The grassroots crusaders over at the Los Angeles Parking Freedom Initiative recently dug up a retired parking enforcement officer who claims he was encouraged to meet ticket quotas, even though those quotas are illegal in California. And now a second retired officer is backing his claims.

Larry Randolph, who worked in parking enforcement for over 20 years, granted the citizen group seeking ballot initiative changes to L.A. parking an "extensive" phone interview, which they reported in their blog on May 9. He told them that the Parking Enforcement office would give overtime to officers to write more tickets. Officers who take the overtime are told they need to write eight tickets an hour each four-hour shift—32 total tickets. Officers who fail to comply don't get more overtime.

Overtime shifts are typically offered around the holidays in December, he said, and in May and June, the end of the fiscal year. At these times, city departments must use or lose money allotted to them. The Parking Enforcement department uses the money on the overtime shifts, and that time-and-a-half their employees receive is a pretty good incentive to write those tickets. And if those tickets are hard to find, then the leniency when it comes to a sliver of a bumper in a red curb or a few minutes on a 2-hour limit spot disappears. Or, the site claimed, tickets for no reason at all.

According to the blog:

There's no penalty for them writing marginal or even sometimes clearly bogus tickets. In fact, the department's policy encourages them to do it, regardless of any written policy to the contrary. As long as they come back with the required number of tickets, that's really all that matters. And if you have to spend endless hours fighting the ticket, or pay a day's wages as your penalty, well that's not their problem. They made their quota, got more overtime, and the city collects more revenue from you, the citizen, the worker, the visitor, the business patron.

The Los Angeles Department of Transportation (LADOT) responded to L.A. Weekly's story about Randolph with this statement:

LADOT does not have quotas for parking citations. Overtime is for special events traffic management support, year-round.

But now a second retired officer has anonymously come out to L.A. Weekly to back his claims regarding the eight tickets/hour during overtime scandal.

Mayor Eric Garcetti announced on April 24 that he'd create a panel to hear out Parking Freedom after they were outraged over his new budget plan that included hiring 50 additional part-time parking enforcement officers, which, a line in the budget noted, would help garner the city an extra $5 million in annual revenue from tickets. The panel, Working Group on Parking Reform, will also include stakeholder groups and city staff.

Parking Freedom's goal is to use a municipal ballot initiative to change what it believes is an abuse of a parking enforcement system that seeks to balance its budget using tickets. And who could blame them? It seems like every Angeleno's received a dubious and pricey ticket—most tickets run about $63, and they double after 21 days. That's practically an entire day of work for someone who makes minimum wage. According to city data that you can find here, a Level 2 Parking Enforcement Manager makes six figures.

Parking Freedom has compiled numerous accounts of complaints here. Submit your own if you're feeling bitter.