Women Tell Story Of How Sober Living Minister First Saved Them, Then Sexually Abused Them 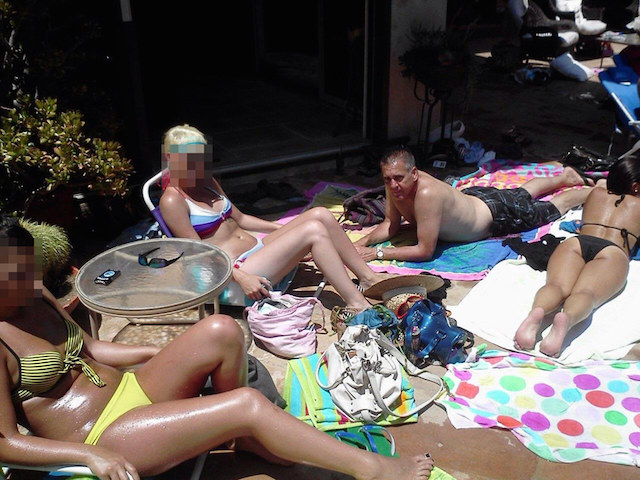 David Powers, on the job (Photo courtesy of the Zalkin Law Firm via Buzzfeed)

When a young woman with a history of drug addiction accuses the devout, married man who owns her sober living facility of sexually harassing her, it seems like society would be quick to denounce her as the 'unreliable narrator.' And in some news segments about Taylor Peyton, 20, and her suit against David Powers, then 54, his company ABC Sober Living, and The Rock Church (who referred addicts to his services), it seemed like they were all too quick to point out that Peyton had a shady past with drugs while showing photos of Powers as a family man. San Diego's 10News, for instance, begins, "Six women who were once drug or alcohol addicts..."

Buzzfeed, however, dug into the story with due diligence. They interviewed Peyton, the five other women who have joined her in the complaint filed this morning, Powers and his wife, the church and the women who defend Powers.

David Powers is the owner of ABC Sober Living, which consists of several recovery and sober living facilities in San Diego. Taylor Peyton was living at a 90-day women's recovery home called Soledad House when she claims Powers asked if she felt the "sexual tension" between them after giving her a ride home on a golf cart this January, Buzzfeed reports.

She says that Powers' behavior worsened over the next four months and included spontaneous visit to her home, lying on top of her while she was asleep and at one point, putting her hand on his genitals and penetrating her with his fingers.

Powers refers to Peyton as 'this girl' in his statements denying her claims. His company's statement asserts that Peyton has "mental health issues." Nine women who either were currently living or had lived at Soledad House were selected by Powers to stand up for him. They called Peyton, who was seeking treatment for heroin, crack and alcohol when she came to Soledad, a liar and questioned her mental stability and sobriety. They accused her of being in love with Powers and for filing the suit because he didn't love her back.

In her interview with Buzzfeed, she addresses how hard it was to come forward. She was in a vulnerable place when she met him, fresh out of the hospital for alcohol poisoning and on probation for possession in California with an admittedly estranged family in the Midwest. She said he made her feel indebted to him.

Because Peyton never specifically tried to stop the harassment, the San Diego Police Department told her she didn't have a case.

San Diego's Zalkin Law Firm, which specializes in sexual abuse cases, is handling the suit. In addition to Powers and his company, the suit names The Rock Church, an evangelical church founded in 2000 by former San Diego Chargers player and Prop 8 defender Miles McPherson, who himself is a recovered addict. Though the church did refer addicts to Powers, spokesperson Mei Ling Starkey told Buzzfeed they have ceased and will not do so again until the investigation is complete. The church has also removed Powers' name from their website, and he is no longer the leader of a weekly beach side bonfire recovery ministry.

Peyton is joined by five other women, one of whom, Andria Donovan, worked at the house from 2009 to 2013 and alleges she was both the victim of and witness to inappropriate statements and touching.

In one allegation, another plaintiff, Mary Catherine Grayson, claims that Powers' wife, Tina, threw a bag of heroin at her and encouraged her to go ahead and shoot up and called her a "junkie whore" after finding out the she intended to speak out about Powers' behavior. In treatment, Grayson had admitted to once having sex with a man in exchange for heroin prior to seeking recovery, something she says Powers repeatedly asked lewd questions regarding.

Buzzfeed also conducted an interview with Powers and Tina, in which he denies the allegations. The interview ends with Tina saying it's time to go.

The question before Tina says that is as follows:

BF: Another serious allegation is that you and your wife were upset that one of the girls was wanting to come forward, and you drove to her house and threw heroin at her, told her "to do what she does best" and called her a "junkie whore."

DP: We helped somebody move, and we had a bed that we were picking up. Someone was being moved or evicted. We were collecting a bed back. Her belongings we left with her; our belongings we took with us. That's the end of it. I don't carry. You know, that's ridiculous too. A lot of this is, consider the source - look at our reputation, look at the people who spoke freely ... Some people have suggested I'm the victim.

It's possible that the women are looking for an easy pay day from an innocent target. It's possible that Powers used his position of authority and the women's fragile situations to assert himself. It's possible it's something else entirely. In either case, this is the kind of reporting that should go into sexual assault cases, and it's commendable that a media outlet known mostly for quizzes about what Mad Men character you are and listicles of puppies is the one to do it.