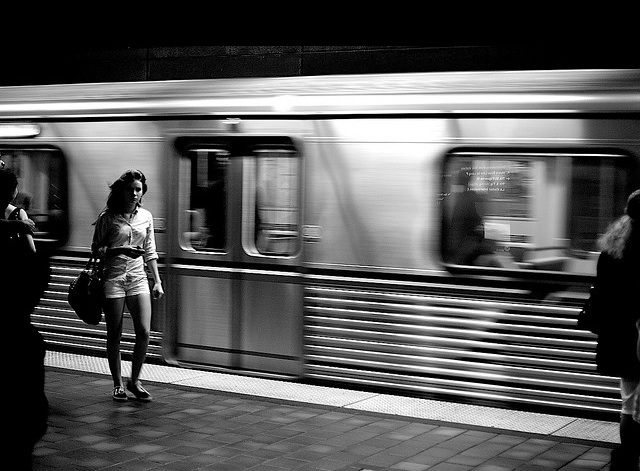 A new survey out by Metro this week asks riders about sexual harassment, and the results, while not surprising, aren't good: about one out of every five riders say that they've been sexually harassed in the past month.

Metro routinely surveys its riders about to find out more about their background (income, gender and race) and whether they feel like their rides are safe, happy and clean. They try to make sure they're getting a good cross-section of rider from the vast majority of the weekday lines. This time Metro asked its riders about sexual harassment.

The survey asks, "In the past month while riding Metro, have you felt unsafe due to unwanted touching, exposure, comments, or any other form of unwanted sexual behavior?" 18% of bus riders answered "yes" along with 21% of train riders. The survey also asked whether riders felt safe waiting for their bus or train to come: 87% of bus riders said "yes" and 84% of train riders said "yes."

This isn't a huge shock, but it is distressing to read the cold, hard data backing up the anecdotal evidence. We've surveyed our own readers to tell their tales of harassment and coping strategies on public transportation. The stories are awful, but worse might be that some victims have said that other riders and even Metro employees turned a blind eye to harassment. Sexual harassment is certainly not an issue limited to public transportation, but Metro should take these responses seriously. (Metro is soliciting comments here.)

The survey wasn't all bad news. It's a little hard to tell based on the graphic below, but it looks like more than 80% riders said they were overall happy with their Metro service—and train riders seem to be a happier than bus riders. And Metro says that over time it has seen a clear trend toward riders who take Metro because they want to—not because they have to:


Overall, Metro bus and rail riders both saw slight increases in median income, as well as a decrease in the percent of riders below the poverty line. This was coupled with a decrease in car ownership for both bus and rail riders, as well as a decrease in the percentage of people who either drove to their first Metro stop/station or were dropped off there. Although income and car ownership have, historically speaking, been positively related, that relationship may be weaker today than in the past. This could possibly be due to a nationwide movement of young adults choosing to forgo the added costs, parking burdens, and risks of owning an automobile.

You can check out the results from the entire survey here:

You can find results from past surveys published in October 2013, September 2012 and January 2012.