L.A. Gets Its Own Waffle-And-Donut Mashup 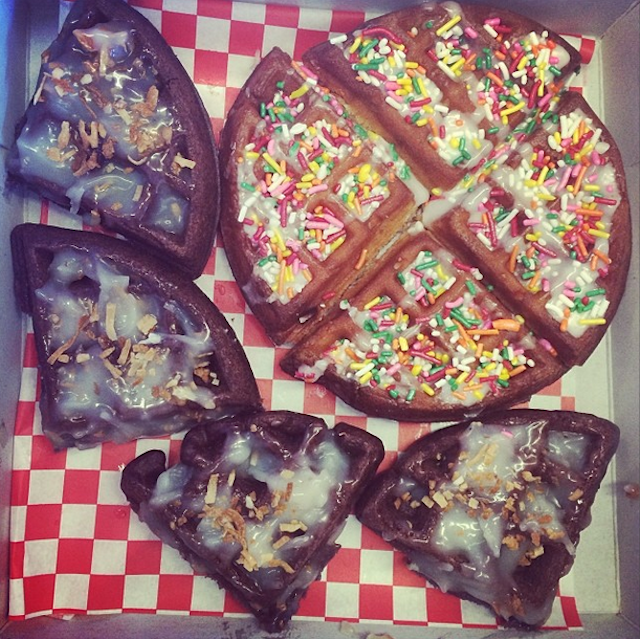 Thankfully, now we don't have to trek all the way to Chicago to get a taste of the wonut— the waffle-and-donut hybrid craze. DK's Donuts in Santa Monica is whipping up their own version, dubbed the "WOW-nut."

The dough of the WOW-nuts are a blend of waffle and donut batter. There's yeast in the dough which makes donuts rise and sets it apart from just regular waffles. DK's Donuts owners take the batter and put it in a cast-iron waffle maker and then deep fry them like donuts.

The original wonut is the brainchild of Alex Hernandez of Waffle Cafe in Chicago. It surfaced in April and combines our love for decadent things—deep-fried goodness (waffles, in this case) that are smothered in glaze and toppings. It's truly beautiful. (Excuse me, while I wipe a tear.)

DK's Donuts has been posting photos of its creations on Instagram since May 1. They have some set waffle-donut cominbations available like butter waffles with vanilla frosting and rainbow sprinkles or ube waffles with Hawaiian coconut glaze and toasted coconut.

They also offer donut-lovers the chance to build their own WOW-nuts. Patrons just need to pick out their type of waffle (original butter, ube, red velvet or chocolate); select from the store's long list of "icings" (including cinnamon sugar, powdered sugar, cream cheese and Hawaiian coconut glaze); and then pick out toppings from items like fresh strawberries to Oreo crumbles. All the waffle-donuts are deep-fried and made fresh when you place your order.

Co-owner Mayly Tao, whose family has owned the Santa Monica location of DK's Donuts since 1981, tells LAist that they are beta-testing their set combinations. Folks should expect a maple-bacon WOW-nut as well as a blueberry one to hit their menus.

The WOW-nuts are going for $6.95 for an entire waffle and $2 for a wedge of it. They're available from 6 a.m. until DK's Donuts run out of their goodies. Make sure to give them a call first to see if they still have their WOW-nuts in stock before you head over.