LAist gets a lot of event announcements, and we comb through them all to bring you a curated list of what’s happening in LA this weekend, including these 21 events. Now, no more excuses...get out there and play. Don’t forget to check out other picks in our monthly column, too. Read on for all the details.

FILM + PODCASTS: Geoff Boucher (formerly of the LA Times’ Hero Complex and Entertainment Weekly) and Nerdist Industries team together for their latest venture: Humans from Earth, a new monthly screening and stage-interview series with the biggest names in Comic-Con culture. It all kicks off Friday (tonight) at the Egyptian with a screening of the Nathan Fillion-led cult classic, Slither. Boucher will interview writer-director James Gunn (who directed the upcoming Guardians of the Galaxy), and a few surprise guests might pop in, too. The Humans from Earth podcast tapings kick off on Saturday (also at the Egyptian) with guests Jon Favreau, Gerard Way, the Russo Brothers and more. Screening tickets: $11, podcast taping tickets (Sat.) are $7.

STORYTELLING: The storytelling/reading series Say the Word is back at the Skirball Cultural Center tonight with the theme: "The Petting Zoo." Hosted by UnCabaret’s Beth Lapides, the evening features Dylan Brody, Carlos Kotkin, Suzanne Whang, Evan Handler and Carol Leifer for an evening of tales about pets, wild animals, spirit animals or even animal magnetism. Cocktails and snacks available for purchase. 8 pm. Tickets: $8-$15. 21+.


FILM: Theodore Bezaire’s indie comedy The Birder starring Tom Cavanagh (Ed, Scrubs) makes its U.S. premiere on Friday as part of the LA Comedy Festival at the Let Live Theater at 7 pm. In the film, which also stars Mark Rendall, Jamie Spilchuk, Tommie-Amber Pirie, Graham Greene and Fred Willard, Cavanagh plays a mild-mannered birder who seeks revenge after a he loses a prestigious birding job at a national park to a younger rival. Tickets: $10+ fees.

PARTY: It seems like only yesterday when we first wrote about Coolhaus. Now the little company that could celebrates five delicious years with one helluva party tonight in DTLA. The $65 ticket price helps raise money for 9 Dots, an after-school tutoring program that works with underserved kids to focus on innovation and technology. The night includes and open bar with craft cocktails, beer floats or just plain beer from Golden Road Brewing, jelly shots by Ludlows Cocktail Co., and, of course, ice cream and ice cream sandwiches. Attendees also get a pre-ordered copy of the Coolhaus Ice Cream book. At the Unique Space. Festivities begin at 8 pm.

PANCAKES + BOOZE + ART: The Pancakes & Booze Art Show is a pop-up art show for more than 150+ local artists and musicians to “showcase their talent without the politics & stuffiness that is commonly found in traditional galleries.” The show takes over Lot 613 in DTLA’s Arts District on Friday and Saturday from 8 pm to 2 am. Live music each night, too, Cover: $5. 21+. Oh, and there’s all-you-can-eat pancakes sponsored by Myke’s Cafe. 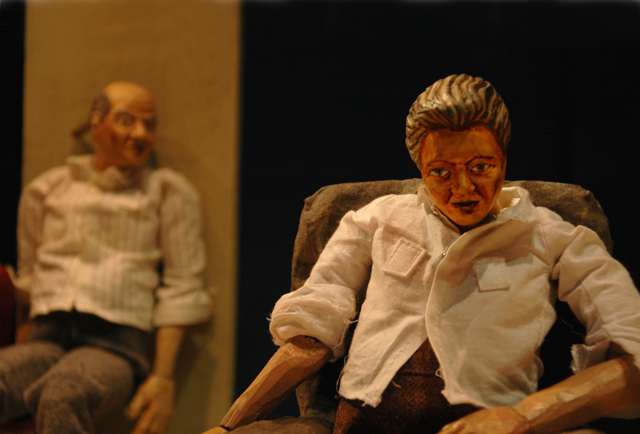 PUPPET THEATER: Concrete Folk Variations, a puppet drama written, directed and designed by Susan Simpson, begins its run at Automata in Chinatown on Friday, through May 11. Set in “lesbian bars, cop shops and street-cars of McCarthy-era Los Angeles,” the drama follows butch detective Loretta Salt who must uncover the murderer of a prominent socialite. Originally a three-part serial, the performance will be presented in its entirety. The production runs Thursdays and Fridays at 8 pm, and Saturdays at 3 pm and 8 pm. Tickets: $18.

EARTH FEST: The Pasadena Earth & Arts Festival takes place on Saturday from 11 am to 5 pm at the Armory Center for the Arts and Memorial Park. The free, all ages event includes live music, dancing, drum circles, family-friendly art workshops and an eco-friendly marketplace. Food for sale from local restaurants and a craft beer garden with Pasadena's own Craftsman Brewing Company.

MURAL RIDE: L.A. County Metro sponsors The Street Mural Ride on Saturday, led by the C.I.C.L.E. organization. Explore DTLA on a curated art tour of street murals. The event is being held in conjunction with Union Station’s 75th Anniversary, so the approximately six-mile ride begins and ends at Union Station, with stops in El Pueblo de Los Angeles and the Arts District.

MUSIC: The legendary Goblin—the Italian masters of the horror movie soundtrack—have worked with directors from George A. Romero and Dario Argento, as well as on their own prog-rock sound that “veers into nightmarish and atmospheric territory, making them a truly original and iconic entity.” Goblin plays a one-night-only show in L.A. on Saturday at the Henry Fonda Theater, featuring tunes from their classic soundtracks and albums. Doors: 8 pm, show at 9 pm. Tickets: $25- $65. Pinkish Black opens. All ages.

BOOKS + COMIC BOOKS: Hot on the heels of Record Store Day is California Bookstore Day—a celebration of independent bookstores across the state. Various bookstores in L.A. have all kinds of treats set up for visitors, from live music to special limited-edition items. Get out there and patronize your local bookstore. If you’re not so much into books books, then remember it’s also free comic book day.

CELLOS: The "cello rock" band Break of Reality plays the Hotel Cafe at 8 pm on Saturday to celebrate their latest release, Ten. They perform both original music and covers, and by far our favorite is still the cover video of The Game of Thrones theme. Advance tickets: $12+ service charge. 21+.

FEST: The Broccoli City fest is an all-ages celebration of community wellness through music. Live performances by hip-hop, EDM, and alternative acts like JoJo, Dizzy Wright, Vashtie, Chuck Inglish and BJ the Chicago Kid, among others. In addition to the music, festival attendees have access to a pop-up market, group yoga and fitness sessions, acupuncture and massage stations, and live art installations. www.BCfestival.com. Noon to 8 pm at the L.A. Mart. Tickets: $29-$45.

TOTSTOCK: Totstock is a day-long event featuring food, wine, music, games, prizes for the whole family. Musical entertainment this year comes from Moby, Laura Marling, Dylan Gardner and a “very special” surprise guest. Tickets are $10 for a family of four purchased in advance by calling 323.663.8049 or $20 the day of the event at the L.A. Family School in Silverlake. Proceeds benefit L.A.F.S.

FILM: The UCLA Film & Television Archive presents a family screening of the beloved novel Charlotte’s Web (1973), about the story of Wilbur the baby pig and Charlotte, the spider who weaves a plan to save Wilbur before he gets turned into bacon. 11 am at the Hammer Museum. Free. Tickets are available at the Box Office one hour before each program and are on a first-come, first-served basis.

BOOKS: Skylight Books holds the launch party for Unlovable, Vol. 3 (Fantagraphics Books) by cartoonist and artist Esther Pearl Watson. The book features all the ‘80s essentials: too much mascara, leg warmers with heels, and huge hair—all from a teen perspective. 5 pm on Sunday.

Your Ultimate Guide To May: 20 Cool Events Happening In Los Angeles

Your Guide to Outdoor Movie Screenings in Los Angeles