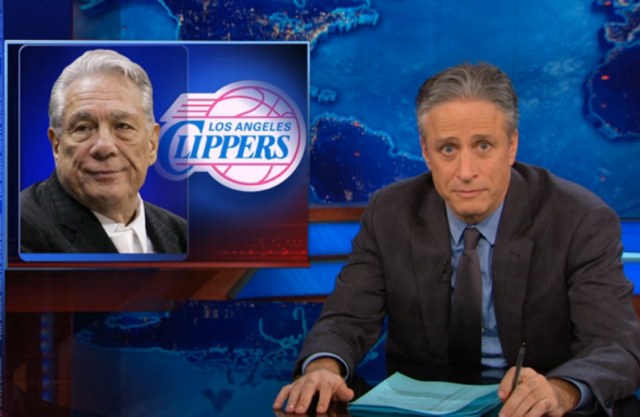 Last night The Daily Show tackled the LA Clippers implosion and the racist remarks allegedly made by owner Donald Sterling. And for good measure, Jon Stewart threw in that other racist-of-the moment, Cliven Bundy.

Stewart played some of Sterling's alleged remarks and noted that he's "a billionaire who's gotten rich off the labors of a mostly black basketball, telling his mixed-race girlfriend not to be seen with black people. It's that age-old story, 'Yeah, I'm racist, but my dick and my wallet are not.'"

Stewart was also amazed that Sterling was allegedly fine with girlfriend V. Stiviano sleeping with blacks, but didn't want her to bring them to games or to post photos with them on Instagram—calling him a "rare creature... a racist swing... 'I don't see color when it comes to who you are fucking.'" As for the LA chapter of the NAACP not going forward with giving him another lifetime achievement award, Stewart said, "Take that, Sterling! Because of your unrepentant racism, you only get one lifetime NAACP lifetime achievement award!"

Meanwhile, LA Clippers coach Doc Rivers has refused to speak to Sterling. Rivers said, "I would like to reiterate how disappointed I am in the comments attributed to (Donald Sterling) and I can't even begin to tell you how upset I am and our players are... From our fans' standpoint, I want to say that they have been amazing, I can tell you that. We need unbelievable support right now from other people and I'm hoping we get that. My hope is that whatever the fans do, it is as one. I think that is what we all should do."

There are anti-racism protests downtown today—it's also the 22nd anniversary of the LA riots.