25 Of Our Favorite Events In Los Angeles This Week

LAist gets a lot of press releases and we go through all most of them to curate a list of our favorite events happening in L.A. Here are 25 events you should know about this week (ridiculously packed with comedy events). Read on for all the details.

MUSIC: The Grammy Museum presents the program Spotlight: Hurray for the Riff Raff on Monday at 8 pm. Alynda Lee Segarra’s project conjures up a blend of blues and Americana. Segarra and band will be in conversation with Scott Goldman, vice president of The GRAMMY Foundation and MusiCares. 8 pm. Tickets: $15.

MUSIC: There’s a little folk, Americana and country at the Roxy tonight with Jason Isbell, formerly of the Drive-by Truckers, headlining the evening. Opening act is Holly Williams, grand-daughter of Hank Williams. 7:30 pm. All ages. Tickets: $25-35.

TV TALK: The Paley Center’s latest public program—The Goldbergs: Your TV Trip to the 1980s—is at 7 pm on Monday with a preview screening of Tuesday’s episode and the cast and creators in attendance to discuss the show. Scheduled to appear are actors Wendi McLendon-Covey, Jeff Garlin,  George Segal,  Troy Gentile and  Hayley Orrantia along with  Adam F. Goldberg, creator/executive producer  and Doug Robinson, executive producer. Tickets: $25, $15 for members.

COMEDY: Neil Hamburger’s monthly comedy/variety residency at the Satellite is now in its seventh year. While it usually takes place on Sundays, there’s special Tuesday night show with Ryan Stout, Moshe Kasher, Charlyne Yi and more. Doors at 8:30 pm and show at 9 pm. 21+ $8.

THEATER : The Hammer Museum and Equality Now present the stage performance of Slut at 7:30 pm. The play is inspired by experiences of the teen cast members: “Through Joey’s story, and those of girls in her community, we witness the damaging effects of slut culture and the importance of being heard.” Written by Katie Cappiello and directed by Cappiello and Meg McInerney. Recommended for audiences 13+. Free.

COMEDY: At Nerdmelt at 9 pm on Tuesday is another edition of Karma: Comedy For Good. The monthly show of stories and standup go to a different charity each month. On the program are: Maria Bamford, Wayne Federman, Ben Gleib, Jon Dore, Baron Vaughn, Hampton Yount, Sean O'Connor, Andy Peters, and James McGrath. Tickets: $10. This month’s recipient organization is the Greater West Hollywood Food Coalition, serving the homeless and hungry every day since 1987.

LITERARY TALK: Writers Bloc Presents The New Yorker's Cartoon Editor Bob Mankoff with artist Shepard Fairey on Tuesday at 7:30 pm at the Los Angeles Theater Center in DTLA. Mankoff discusses his new book How About Never—Is Never Good for You? And he and Fairey will talk about public art, political cartoons and whatever else is on their minds. Tickets: $25. 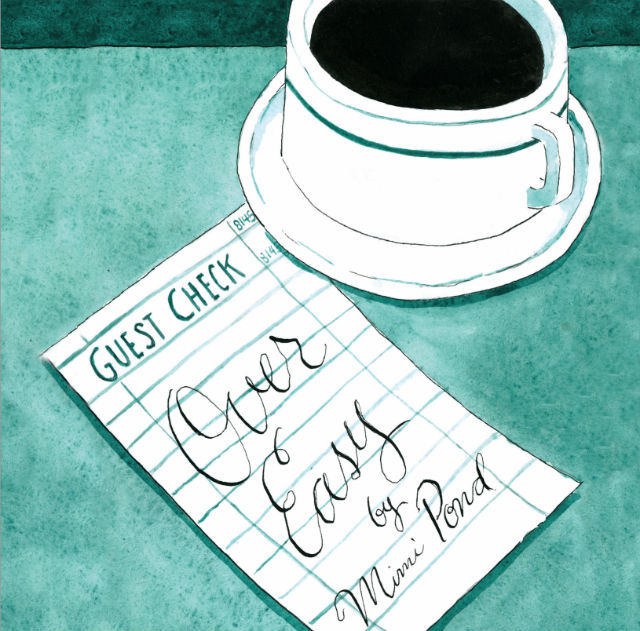 GRAPHIC NOVEL: Artist and L.A. resident Mimi Pond is at Skylight Books on Wednesday at 7:30 pm to talk about her latest graphic novel Over Easy (Drawn & Quarterly). The memoir is a coming-of-age story, “equal parts time capsule of late 1970s life in California—with its deadheads, punks, disco rollers, casual sex, and drug use—and bildungsroman of a young woman who grows from a naive, sexually inexperienced art-school dropout into a self-aware, self-confident artist.”

COMEDY: Eric Schwartz (Smooth-E) hosts a comedy show that mashes up live comedy and multimedia. On the bill are Schwartz, Adam Ray, Andre Meadows, Sean Klitzner and others, along with comedians and digital stars from YouTube, Vine and beyond. At the Laugh Factory in Hollywood at 10 pm. Tickets: $17/$27 in advance, and $20/$30 door.

COMEDY: The DJ Faucet Sketch Comedy troupe—specializing in dark, absurdest comedy—presents a free performance at 8 pm at the Comedy Central Stage at the Hudson Theater. Tickets are free, but they require a reservation by calling 323.960.5519.

DESIGN TALK: AIGA Los Angeles presents its speaker series - Hecho en L.A. at Maker City LA on Wednesday from 6:30-9:30 pm with special guest Yo Santosa. The founder and creative director of Ferroconcrete, Santosa is an Emmy nominee for her title sequences for shows such as Ugly Betty, Desperate Housewives and the feature film 300. “As an entrepreneur, Yo created früute, a modern cookie and gift company along with Commodity, Yo’s online fragrance company….” Tickets: $25-$30.

PERFORMANCE: Comic Jane Bussmann brings her book A Journey to the Dark Heart of Nameless Unspeakable Evil: Charities, Hollywood Joseph Kony & Other Abominations to life on stage at Largo for an evening of political comedy. Doors 7 pm, show at 8:30 pm. Tickets: $30.

LIT: Vroman's presents Sandra Tsing Loh discussing and signing Madwoman in the Volvo: My Year of Raging Hormones at 7 pm on Thursday at All Saints Church in Pasadena. Loh, a writer and radio commentator, “speaks hilariously and candidly about her life as a mother, daughter, and artist. She recounts her journey through a tumultuous time of life, trying to maintain appearances during an epic hormonal change.” Admission is $25.95 (includes one copy of Madwoman in the Volvo and two tickets).

LIT: On Thursday at 8 pm, Live Talks LA presents An Evening with Dave Barry, who discusses his book, You Can Date Boys When You’re Forty: Dave Barry on Parenting and Other Topics He Knows Very Little About. At William Turner Gallery in Bergamot Station. Tickets: $20; $45 includes Barry’s book and reserved seat and $95 also includes the pre-reception at 6:30 pm.

MUSIC: All American Rejects & Youngblood Hawke headline a charity show at the El Rey for the Tick-Borne Disease Alliance. It also marks the release of the book Lyme Light: A Memoir by Natalie H.G. London. Other artists include: In the Valley Below, The Lonely Wild, Hey, King! Henry Fleishman and Aaron Embry as well as celebrity guest appearances. Doors at 7 pm, show at 8 pm. All ages. Tickets: $18.