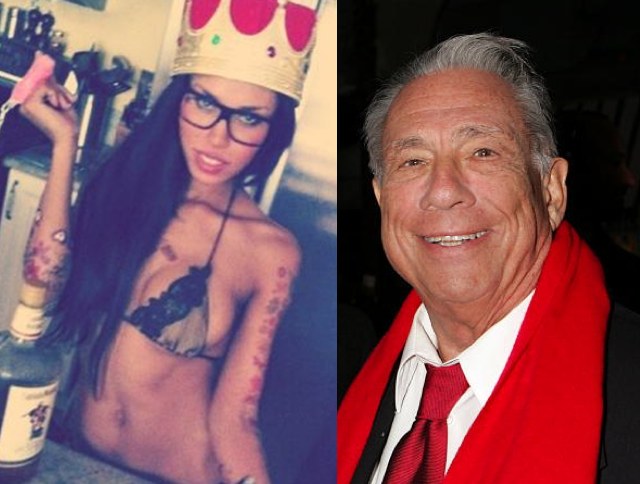 Donald Sterling, the real estate mogul and owner of the LA Clippers, has been reportedly caught telling his girlfriend not to post photographs of herself with black people (or other minorities) on Instagram—and that includes Magic Johnson—or bring them to his games. But, claims TMZ and the audio they obtained, Sterling is cool if she "sleeps with" them!

According to TMZ, "Sterling rails on Stiviano — who ironically is black and Mexican — for putting herself out in public with a black person (she has since taken the pic down). But it doesn't end there." Also, some highlights:

— "It bothers me a lot that you want to broadcast that you’re associating with black people. Do you have to?" (3:30)

Stiviano allegedly says at one point, "I'm sorry that you're still racist in your heart." Sterling has been sued for racial discrimination in the past.

Magic Johnson told TMZ Sports, "It's a shame that Donald Sterling feels that way about African-Americans... He has a team full of amazing African-American basketball players that are working to bring a championship to Clippers fans. The Clippers also have a strong minority fan base."

Update 1:20 p.m.: Johnson has said African-Americans should boycott Clippers games until Sterling steps down as owner or sells the team, according to TMZ Sports. "He wants our money but doesn't want us to show up," he said.

Meanwhile, the NBA is looking into the allegations, according to ABC7. NBA League spokesman Mike Bass said on Saturday: "We are in the process of conducting a full investigation into the audio recording obtained by TMZ. The remarks heard on the recording are disturbing and offensive, but at this time we have no further information."

Update 2:30 p.m.: Negative reactions against Sterling continue to come from all over the place. Clippers coach Glenn "Doc" Rivers said it is "disturbing to hear anyone say that, it doesn't matter if it comes from someone we work with," according to City News Service. Snoop Dogg called him a "redneck" and a "racist," among other choice words in an Instagram video. Rap legend Chuck D, Anchorman 2 director Adam McKay and The Roots' Questlove are among the other celebrities that have taken to Twitter and Instagram to respond to the controversy.


Donald sterling is the definition of racism .... He could b your judge.... Your doctor.....you teacher etc... I bet nothing happens 2 him!


Hard to ignore anymore. Donald Sterling, owner of Clippers is a massive racist. Ill be giving up my season tix. #ClippersOwnerIsaRacist


Part of me wishes the Clippers won't suit up for the rest of the season. A fella can dream tho. #DonaldSterling

Update 4:15 p.m.: Sterling and the Clippers issued a statement saying he doesn't know if the audio "was legitimate or has been altered," TMZ reports. According to Sterling, a former employee made the tape who is embroiled in a lawsuit with the Sterling family. The employee allegedly embezzled more than $1.8 million from the family and after being sued told Sterling she would "get even," according to the statement:

"Mr. Sterling is emphatic that what is reflected on that recording is not consistent with, nor does it reflect his views, beliefs or feelings. It is the antithesis of who he is, what he believes and how he has lived his life. ... He feels terrible that such sentiments are being attributed to him and apologizes to anyone who might have been hurt by them."