'The Final Member': This Documentary's More Than A Pissing Contest 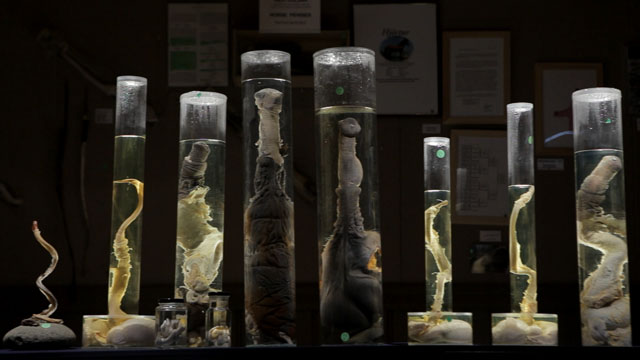 'The Final Member' screens in L.A. this week. (Image: Courtesy of Drafthouse Films)

The Final Member, a documentary by Jonah Bekhor and Zach Math, is ostensibly a film about phalluses and Sigurður "Siggi" Hjartarson’s penis museum in Iceland. **Update: While the doc was filmed at the museum's original location of Husavik, it moved in to Reykjavík in 2012.

What began as a private collection more than 40 years ago—after Hjartarson was gifted a bull penis as a joke by a professor—has evolved into a robust museum of mammalian male genitalia. Originally located just 30 miles from the Arctic Circle, the Icelandic Phallological Museum, boasts preserved specimens from all sides of the size spectrum, from sperm whales (huge!) to hamsters (not so much!).

While talking about human sexuality and looking at size and shape differences in anatomy in the animal kingdom is interesting, to a point, filmmakers Bekhor and Math wisely turn the cameras toward a fascinating story-within-the-story, exploring issues about fame, aging and mortality in the process.

At the beginning of the film, the museum is missing one key item: a human penis to display. Hjartarson has a hard time (no pun intended) finding a man willing to donate his member to the collection. It seems that the Icelandic men mostly want to be buried with all their parts. But then Hjartarson meets a prospective donor: the elderly Páll Arason, a former adventurer and Cassanova, who’s proves to be quite a character.

Arason is still feisty into his 90s, and isn’t shy about his sexual conquests. In fact, he wrote down in a diary every time he got laid, and has amassed the names of about 300 women (not counting the prostitutes and whores, naturally). Arason has agreed to donate his penis after he dies, but as the film progresses, we see that he’s plagued by doubt—and shrinkage as he ages. In Iceland, it seems, there's a legal limit to a man’s member (5 inches), based on an old folk tale, and there’s a question of whether Arason will meet that requirement.

From the other side of the world, Hjartarson is contacted by Californian Tom Mitchell, who also wants to donate his penis to the museum—while he’s still alive—in a convoluted quest for fame. He’s described as “eccentric” in the film notes, and Mitchell certainly lives up to that billing and then some. He openly talks about “Elmo” (the name one of his former wives named his unit) and its 7 healthy inches; he even gets a red, white and blue tattoo across Elmo’s head in preparation for a patriotic display of American pride in Iceland. (And really, we didn't need to see all of it.)

The film then turns into this weirdly engrossing and suspenseful competition between the two men, with Hjartarson trying to stay as far away from the complicated drama as possible. We can tell that he’s rooting for Arason as a fellow Icelander, and is a bit freaked out about Mitchell’s pestering about Elmo’s display. Reasons why Mitchell wants to lop off his penis are revealed in the end; and there ultimately is a “winner” in this contest.

But in between all the cockfighting and size-ups-manship, there are moments of raw emotion, from Tom’s confession to a doctor, then therapist to Hjartarson’s sheer joy in receiving the package that completes his collection and life’s work.

The Final Member is certainly not for everyone, but if you can get past the penises, you’ll find a story about these three men who, in their own way, try to stake their claim in this world. Like many of us, they’re just hoping to be remembered long after they’re gone.

The Final Member opens tomorrow in L.A. It screens at Cinefamily through April 30th. In conjunction with the opening, there’s a pop-up museum exhibit of male organs on Cinefamily’s back patio. And if you’re really into the specimens, select exhibit materials will be available for sale throughout the film’s run, via silent auction.