Not going to Coachella? No worries because there’s PLENTY to do this weekend in L.A. LAist gets a lot of event announcements, and we comb through them all to bring you a curated list of what’s happening in LA this weekend, including these 22 events. Now, no more excuses...so get out there and play. Don’t forget to check out other picks in our monthly column, too. Read on for all the details.

FILM: The new documentary The Anonymous People has its L.A. theatrical premiere this weekend at the Laemmle Royal Theatre. The feature documentary film focuses on the 23.5 million Americans living in long-term recovery, and the “emerging public recovery movement that will transform how alcohol and other drug problems are dealt with in our communities.” After the 7:50 pm screening on Friday, there will be a Q&A/discussion with actor and author Kristin Johnston and Harold Owens, senior director of Musicares. Tickets: $11.

WEB SCREENING: The Distillery presents the L.A. premiere of the comedic web series here comes godot—about good actors struggling to make it through bad plays. The screenings at 7:30 and 9:30 pm take place at the Cat in the Lotus gallery in Glendale and will also feature original art installations and music. Wine and cheese receptions before and after each screening. Doors at 7 pm. Free.

MUSIC: Singer Charlotte Sometimes, most recently of the TV show The Voice, celebrates the release of her EP By Request on Friday at Room 5. The songs on her EP were picked by her fans and were recorded, stripped down, in one take. 9 pm. Admission: $10. 21+. 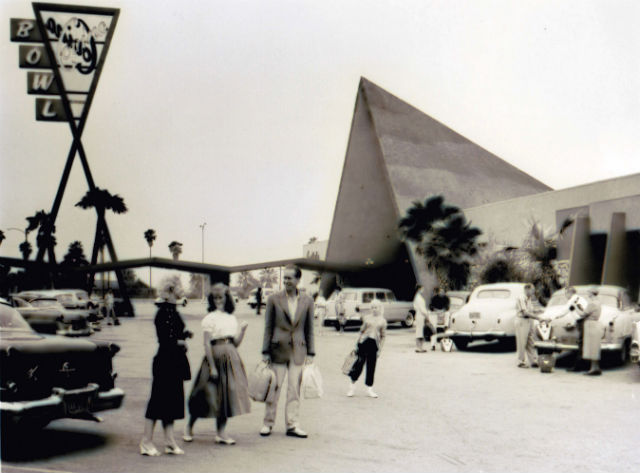 ART: The Architecture and Design Museum of Los Angeles opens the exhibition Bowlarama: California Bowling Architecture 1954-1964, on view through May 11. The public reception on Friday is from 7 to 9 pm. Curated by local historian and writer Chris Nichols, the exhibition looks at the “architecture and technology that created a new kind of space-age recreation center and reinvented the sport of bowling in the 1950s” and features photographs, drawings and original artifacts.

VARIETY: The comedy/music/variety troupe Lost Moon Radio ends its run at The Hudson Backstage this weekend. The show Lost Moon Radio Gets a Job, is an exploration of “all things workplace and office related” through songs, sketches and a live band. Shows on Friday and Saturday at 9:30 pm. Tickets: $20.

ART: On Friday G1988 celebrates its 10-year anniversary of its Melrose location with an art opening and party from 7-10 pm at its West location. The gallery asked some of its fav artists to create pieces celebrating pop culture,” but in a subtle, less obvious manner.”

SELFIE SYMPOSIUM: The half-day symposium The Social Self: Selfies, Self-documentation, and Self-Portraiture takes place at LACMA at 1 pm. The panels and lectures explores “the timeless impulse of self-portraiture alongside new technologies, social media and contemporary art.” Speakers/panelists include Sean Rad, founder and CEO, Tinder; Amanda Ross-Ho, artist; and Susan Bright, curator, writer, and professor at School of the Visual Arts, among others. At 7 pm is a screening of the film I Am Comic, opening with comedian Adam Grabowski. Free.

FESTIVAL: The Getty Center celebrates Queen Victoria's 19th-century world at a Family Festival. In addition to activities planned throughout the day, guests will enjoy tunes from Scottish bagpipes, English music hall tunes, Gilbert and Sullivan operas with the Pacific Opera Project and LA Opera singers performing popular music from Queen Victoria’s time. The festival complements the exhibition A Royal Passion: Queen Victoria and Photography. The festival takes place between 10 am-5:30 pm in the Museum Courtyard. Free.

CHEESE!: Saturday is National Grilled Cheese Day and the perfect day to hold the last Grilled Cheese Invitational ever. The cheesing takes place at the Los Angeles Center Studios in DTLA with music, fun and games, food, beer, poetry and more. Bring your own Lactaid. The invitational takes place from 11 am-6 pm. Tickets: $15-$25.

PERFORMANCE: The folks at Unbound Productions (who bring you Wicked Lit in a cemetery) are holding a party/fundraiser at Mountain View Mausoleum. The Night at the Mausoleum features a 50-person poker tournament, a silent auction, and pick 'em game with prizes. In addition to an evening of poker, there are staged readings of The Fall of the House of Usher, The Legend(s) of Sleepy Hollow and
Kick the Can (a Twilight Zone teleplay), read by some special guests, and a special screening of The Dead Smile short film from Wicked Lit 2012. 6 pm. Admission + poker tournament is $45. General admission is $25. 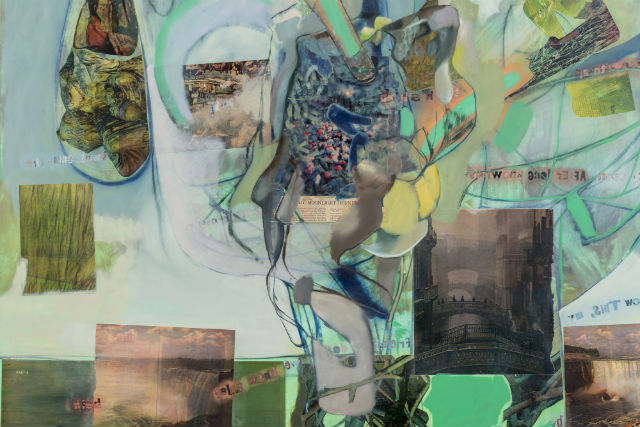 ART: Regen Projects opens an exhibition of new work by L.A.-based artist Elliott Hundley on Saturday with an opening reception from 6-8 pm. Included in the show are a series of paintings, collages and bronze sculptures.

HITCHCOCK: American Cinematheque delves even deeper into the Hitchcock canon with a series dedicated to the director’s popular and rarely screened works. Screening tonight is Sabotage (1936), an adaptation of Joseph Conrad’s The Secret Agent, followed by Number 17 (1932), an adaption of J. Jefferson Farjeon’s hit West End play. Between features, the documentary short by Robert Fischer: “Monsieur Truffaut Meets Mr. Hitchcock,” 1999, also screens. 7:30 pm at the Aero Theatre in Santa Monica. $11.

PERFORMANCE: The LA Times Festival of Books takes place on Saturday and Sunday, but the fun continues into the night with the new Festival after Dark program on Saturday, featuring a live performance of American Public Media's Wits program, hosted by John Moe and featuring comedians Margaret Cho and Paul F. Tompkins, with musical guests Superchunk and Will Sheff of Okkervil River. 8 pm at USC Bovard Auditorium. Tickets: $33.50 to $65.

CULINARY HISTORY: The Culinary Historians of Southern California presents Culinary Trends in Gold Rush San Francisco...with Molasses on Top at 10:30 am on Saturday at the Mark Taper Auditorium of the LAPL’s Downtown Central Library. Erica J. Peters talks about the foods of the California Gold Rush, San Francisco’s first restaurants and cuisines. A reception with themed refreshments follows the presentation. Free. 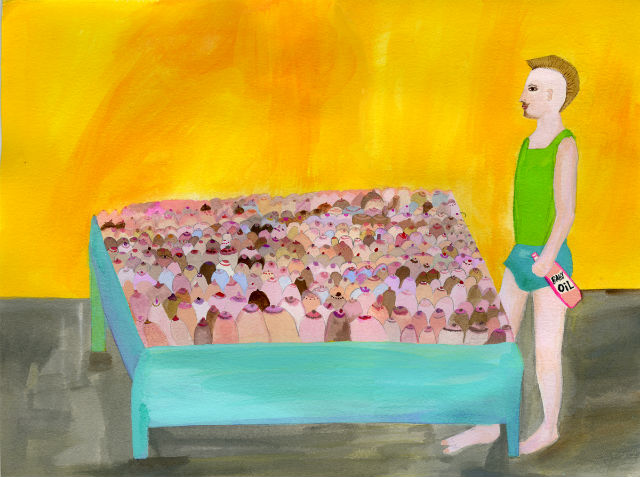 'Bosom Bed' by Alexander Lakin is one of the works on view at Wilding Cran Gallery.

ART The new Wilding Cran Gallery moves from an online space to the Arts District of DTLA. Its first exhibition Inaugural Show #1 opens with a reception from 6-8 pm on Saturday. The group show features several contemporary artists and remains on view through May 10.

ART: William Turner Gallery opens Resonance, the first solo show for Koji Takei. The series of sculptures feature musical instrumets as subjects. Also opening at the gallery is an exhibition of new work from the Toronto-based multimedia artist, Franco DeFrancesca. The opening reception for both exhibitions is from 6:30-8:30 pm on Saturday.

DANCE PARTY: The Craft & Folk Art Museum holds a Bollywood Dance Party on Sunday in conjunction with the Big Read (a national literacy initiative for which participants are reading Indian-American author Jhumpa Lahiri’s The Namesake. The party features music by Discostan collective DJs, a bangle-making workshop and Bollywood dance performances and lessons. Tickets: $7-$10.

PUPPETRY: Its the final weekend of the LA Puppet Fest, and the Skirball holds its third annual celebration of the art of puppetry, with interactive puppet performances, shadow puppetry, live music, art making and an interactive display from the Los Angles Guild of Puppetry. The festival takes place all over the Skirball’s campus from 10 am-4 pm on Sunday. Admission: $5-$10.

FILM: The UCLA Film and Television Archive presents one of our fav film musicals on Sunday at 11 am: Singin’ in the Rain (1952). Bring the family along to watch Gene Kelly, Debbie Reynolds and Donald O'Connor sing and dance their way across the big screen. At the Billy Wilder Theater. Free Admission.

Your Guide to Outdoor Movie Screenings in Los Angeles