Cookies & Milk Shooters Are Everything You Wished They'd Be 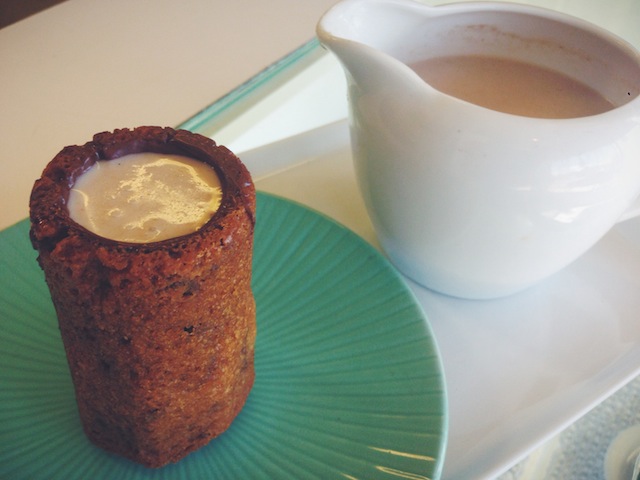 Despite the recent health code violations, we love Dominique Ansel. His clever take on much-loved desserts has struck a chord with the zeitgeist, with his cronut taking the center stage.

And while the French pastry chef has much more on offer at his SoHo storefront (the perfect "DKA" kougin amman and caneles, to name a few), we couldn't help but squeal over the announcement of this new chocolate chip cookie shot glasses filled with milk.

The elation continued when Platine Bakery in Culver City announced that they'd be knocking off the fantastical creation here in L.A., mainly because their cookies are some of the best in the city, and we knew they wouldn't lead us astray. (There were plenty of cronut knockoffs around town, so it was bound to happen at some point.)

Platine's cookie shots have been selling out early, but there aren't Ansel-esque lines down the block yet, thank goodness.

Their version of the dessert is served with cookie-infused milk that's poured into a dark chocolate lined cookie shot glass. The cookie is baked into this shape by using what looks like a giant canele mold. The dough is still the slightest bit chewy, but its structure as a vessel for liquid remains intact from the hardened chocolate on the inside of the glass. The shot can be served warm or room temp, but who can turn down a warm cookie when it's offered, right? It's ridiculous and delicious all at the same time.

Platine is also offering other new desserts for the spring, and is using the shots as a launching pad. Some of those include salted caramel birthday cake by the slice and ready-made cookie dough for baking at home.

We won't blame you if you pick up a pint of chocolate chip cookie dough and try to hack the recipe at home—perhaps with a splash of booze in the infused milk. Don't worry, we'll be doing it too.