Your Guide To Outdoor Movie Screenings In Los Angeles

Nothing screams summertime in L.A. like picnicking on a blanket with a crowd that knows every line of Spaceballs. An AMC theater just can't give you the same experience. Here is a list of our favorite outdoor movie screenings at the beach, the Rose Bowl or a vacant parking lot downtown. We'll keep our eyes peeled and update the list when other faves like Cinema on the Street announce their summer lineups. Remember to check the websites of these events before attending as film and time listings sometimes change. 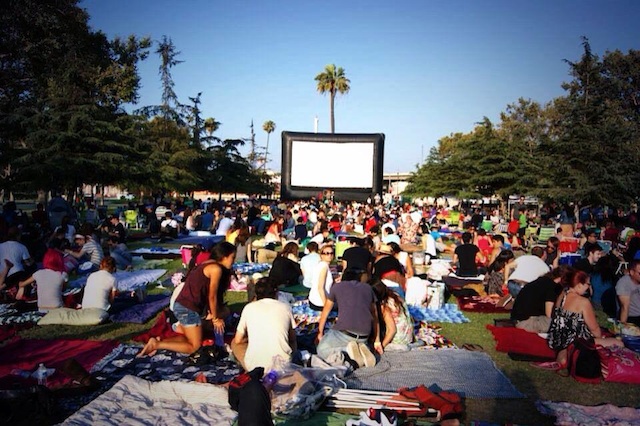 Street Food Cinema is more than your average film in the park. It's like a screening crossed with a concert and a farmers market. There will be food trucks and also live music to kill time before the movies begin. Their screenings, which kickstart during Memorial Day weekend and then follow through to the end of September, are shown from Culver City to Pomona. Aside from just playing old school favorites like Goonies and Clueless, they'll also be celebrating Say Anything's 25th Anniversary and have a live Rocky Horror Picture Show troupe, Sins O' the Flesh, perform alongside the screening.

They bring out familiar food trucks like Seoul Sausage and Grilled Cheese Truck, but they'll also be launching a new artisanal market where you can expect to find cheeses, hand-made preserves, fresh fruits and sweets. Oh, and you can also bring your pet pooches along to the screenings because...dogs love movies too, right? (Maybe the pups might like to attend the Reservoir Dogs or Wolf of Wall Street screenings?)

Street Food Cinema runs from May 24 to Sept. 27. General admission is $12, reserved seating is $17, children from 6 to 12 is $6, children 5 and under are free, and group rates are available at info@tilpr.com. Doors open at 5:30 p.m., band plays at 6:30 p.m., audience games start at 8 p.m., and the movie starts at sundown. Most locations allow dogs except for the Pomona spot. More info can be found on Street Food Cinema's website here.

Here is the movie schedule:

Veterans Memorial Park at 4117 Overland Ave. in Culver City:
June 14—Bring it On 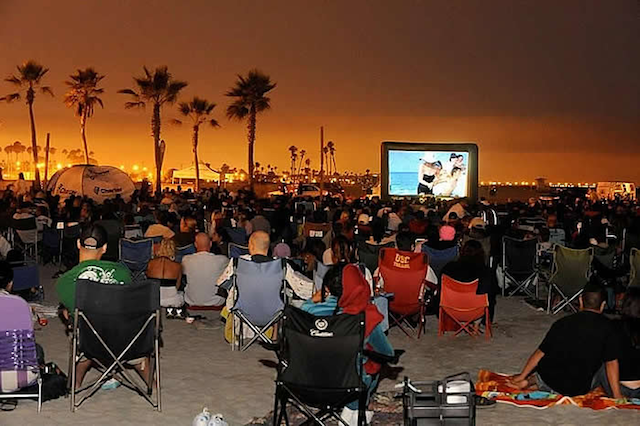 Moonlight Movies on the Beach (Photo via Alfredo's Beach Club)

Moonlight Movies on the Beach

Where else but in SoCal can you watch a movie right on the sand? Long Beach's Moonlight Movies on the Beach entices us Angelenos to actually make it to the beach (because we're pretty damn lazy otherwise) with free movie screenings this summer. Alfredo's on the Beach, which hosts the screenings, sells popcorn and drinks in case you get the munchies. Their summer series runs from June 21 to September 9, and you'll get to watch classics like Spaceballs as well as newer releases like Frozen and Gravity. And we love that they're closing out their summer series with a screening of Jaws while you look out into the dark vastness of the ocean.

Moonlight Movies on the Beach will hold screenings at Granada Beach and Mothers Beach in Long Beach. Movies start at dusk around 8 p.m. For more info on the screenings, visit their website here. 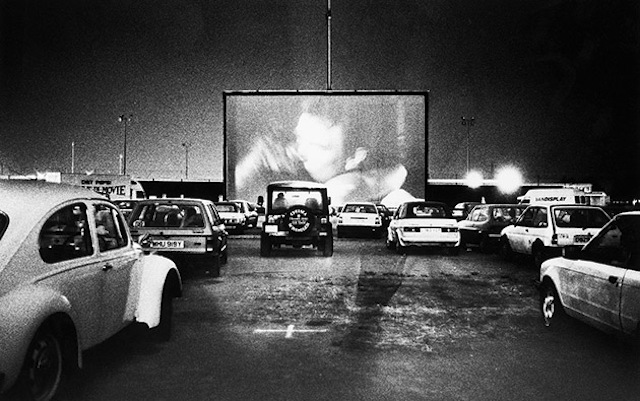 Electric Dusk Drive-In is like a throwback to the 50's. The year-round drive-in movie theater in downtown lets you watch films (like Wayne's World and Sunset Boulevard!) in your car like the good old days with the audio sent through your car radio. (Maybe you can even make out in the back seat!) But if sitting in a car just isn't your thing, you can also get the outdoor lawn experience by buying tickets for their Astroturf seating (bring a lawn chair or a blanket) and check out the film with their outdoor speakers. Carhops selling hamburgers and hot dogs come around to take your order from their snack shop.

Electric Dusk Drive-In is located at the City Market of L.A. at 1000 San Julian St. downtown. If you purchase your tickets in advance online (which they highly recommend as shows do sell out), they are $9 to $11 per film or $9 to $13 for double features. At the door, they will cost $2 more than the advanced online ticketing prices. Family Night at the Drive-In tickets are $8. Group tickets are $8.50 each, but you must buy at least a minimum of 10 tickets. Children under 5 are free. Showtimes vary for the different screenings (from 8 p.m. to 8:30 p.m.), so make sure to check out their website for more information.

Here is their summer film schedule: 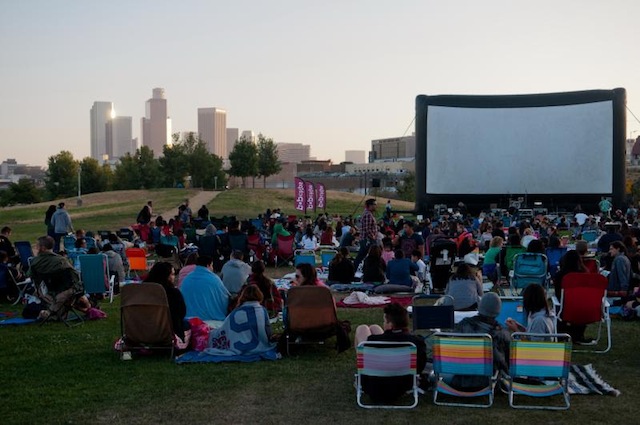 Eat|See|Hear is back for its third year and pretty much offers you everything their name suggests. They'll be screening 19 films (mostly comedies) on their three-story inflatable movie screen from May 10 to September 13. They're kicking off their movie season with (500) Days of Summer, and although we love Joseph Gordon-Levitt, we can't help but feel giddy about their Rushmore screening. (We might still be riding high from Wes Anderson's The Grand Budapest Hotel.) Screenings will be taking place on both sides of town in Santa Monica and Los Feliz. They're also bringing back their "Christmas in July" celebration on July 12 with quirky Christmas decorations and a Santa Claus visit to go along with National Lampoon's Christmas Vacation.

Coolhaus' ice cream sammies and Brasil Kiss Mobile Coffee Bar along with other food trucks will be making appearances at the events. Your pooches also get some food at the screenings—free doggie biscuits are handed out at the door. And the "Hear" part? There will be live bands performing to get you amped up while you wait for your movie to start.

Here is the screenings schedule: 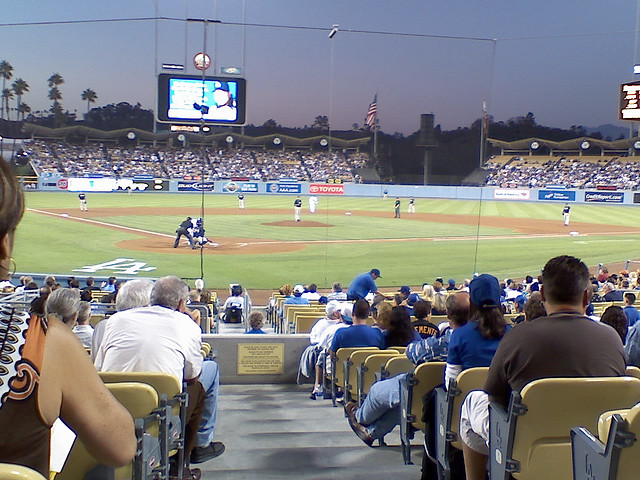 A game at Dodger Stadium (Photo by Burns! via the LAist Featured Photos pool on Flickr)

Dodger Stadium is even jumping on the outdoor movie screening train and will be showing three flicks this summer after their games. And of course, they're all baseball movies, including Field of Dreams and a League of Their Own. Now you'll get the chance to be in a baseball stadium watching Tom Hanks in a baseball field. It's very meta.

If you buy game day tickets, you'll get to enjoy the post-game screenings shown on the DodgerVision screens on April 26, May 31 and August 16. Ticket prices vary depending on which seats you select, so check the website for more information. They're also offering a three-game Dodger Stadium Movie Series Mini Plan at a discounted cost that allows guests to go to the games, watch the films, and also redeem a voucher for popcorn or a soda. The ticket package in that deal can go as low as $60. Dodger Stadium is located at 1000 Elysian Park Ave in Elysian Park. For more information on the schedule and tickets, visit the Dodgers website here.

Here's something for the folks out in Marina Del Rey. Burton Chace Park will be holding family-friendly outdoor movie screenings on Thursdays and Saturdays this summer. Bring out a picnic basket and sit under the stars for movies like The Never Ending Story and Despicable Me.

Here is the movie schedule: 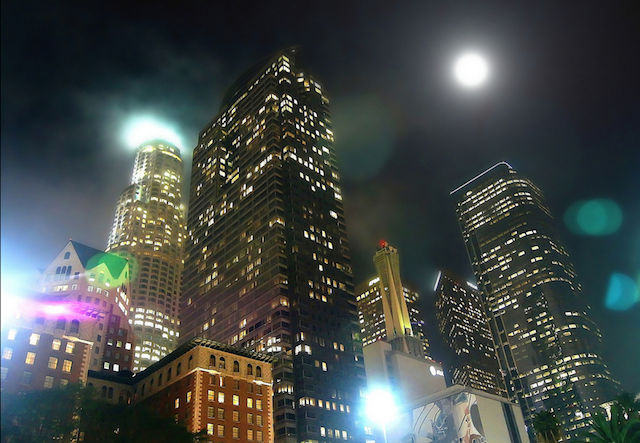 Angelenos get to enjoy some free outdoor movies in downtown's Pershing Square (in the center of some awesome skyscrapers) on Fridays starting on May 2 through June 27. The screenings this year have a heavy superhero and race-car theme going on. Bring a picnic basket, blanket and your pooch (well, only if your pup's well-behaved and on a leash). 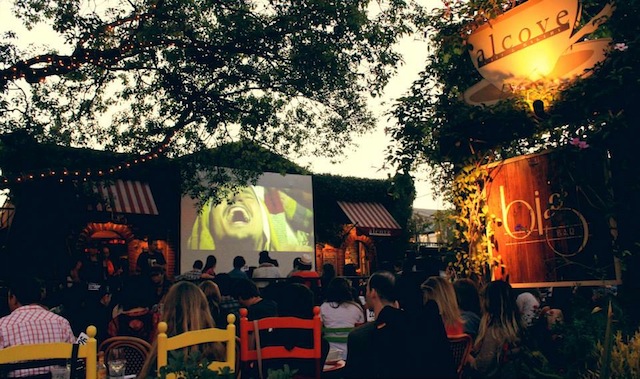 Alcove Dinner and a Movie

Alcove Cafe | Big Bar is combining our favorite things for their screenings this year—food, booze and cult classics. Their free event out in their garden patio will have movies like The Adventures of Priscilla Queen of the Desert and The Shining on a 17-foot screen mixed in with themed cocktails and a dinner menu. It's a pretty romantic vibe there if you want to impress someone. 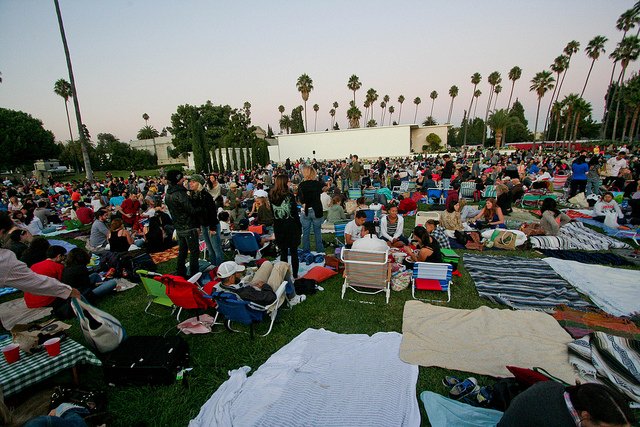 Cinespia has some of the best outdoor movie screenings out in L.A. The film buffs behind Cinespia hold their screenings every summer at the Hollywood Forever Cemetery. Where else but in L.A. can you hang out at a graveyard late at night and not feel weird about it? Plus, you can bring a picnic basket and beer and wine while you lay out your blanket on the grassy field. Cinespia is known for its great selection of cult classic faves (which include Seven and Almost Famous in this round!). DJs spin before and after the show; Cut Chemist and Peanut Butter Wolf have previously spun there on the ones-and-twos. And it attracts fun movie fans who sometimes dress up as their beloved characters from the films being shown. Make sure to buy your tickets early online as they do sell out pretty quickly and get in line early for a good (and unobstructed) spot.

Gates open two hours before showtime and times vary. Tickets are $14 and can be purchased online here. Hollywood Forever Cemetery is located at 6000 Santa Monica Blvd. in Hollywood.

In Old Pasadena during the month of July, folks get to check out a mix of different types of films—from old horror flicks, classics and documentaries—at different spots in Pasadena during the city's free summer film festival. For the Central Park screenings, you get to enjoy the grub from the food trucks and tunes from the DJs starting at 7 p.m. before the films start; bring chairs and blankets for these ones. As for the other locations, they'll be providing the seating, but get there early for a spot.

For more info on the screenings, visit their website here.