Weekend Planner: 25 Things To Do In L.A.

LAist gets a lot of event announcements, and we comb through them all to bring you a curated list of what’s happening in LA this weekend, including these 25 events. Now, no more excuses...so get out there and play. Read on for all the details.

PERFORMANCE: Continuing a three-night run at REDCAT is the experimental performance stylings of Timur and the Dime Museum. Their show Collapse mixes “chamber music and post-punk cabaret” with an operatic song cycle by Daniel Corral and video projections by Jesse Gilbert. Shows at 8:30 pm Friday and Saturday. Tickets: $16-$25.

COMEDY: Friday marks the L.A. Debut of the TBS-Featured Stand-Up Showcase: The Shit Show. Hosted by Ever Mainard (Just for Laughs, CNN, Jezebel, NPR), the show begins at 7:30 pm at The Good Nite in North Hollywood. It’s been described as a half party, half show with audience prizes, too. In the lineup are comedians Lisa Laureta, Ryan Walker, Kate Duffy, Jet Eveleth, Joe McAdam and headliner Emily Maya Mills. The show is free in advance or $5 cash at the door.

LIT: Book Soup and The Fold present David Yow, David Wm. Sims and Mac McNeilly discussing and signing their band autobiography, The Jesus Lizard Book, at the Bootleg Theater. Moderated by Horatio Sanz, the band members will probaly touch upon their Chicago/Austin roots and their decade of dominance in the 1990s. The event begins at 7:30 pm. Tickets: $8, $32 (includes the book).

FILM FEST: The first Hollywood Horrorfest takes over the New Beverly on Friday and Saturday night. The festival is dedicated to film-goers who love B-movies and things that go bump in the night. In addition to film screenings, the festival honors Joe Dante (The Howling, Gremlins) with the first (Vincent) Price Award, presented by his daughter Victoria, who will also talk about her famous father, his legacy and museum. Tickets for all events are free except for the red carpet screenings of The Howling and Return of the Living Dead. (Those films are $10 each.)

ART: The Inside/Outside Gallery presents Dorood: New Art From Iran, an exhibition curated by Marjan Vayghan. The opening reception takes place Friday from 6-11 and includes a presentation by the curator. On view are works by younger/underground artists working in Tehran and other cities, many of whom are showing their art for the first time in the U.S. RSVPs: 323.413.2001. Works will be on view daily through April 30.

THEATER: The Visceral Company opens the West Coast premiere of the dark science-fiction thriller Recall by Eliza Clark (writer for AMC's Rubicon and The Killing) on Friday night. The play is set in a dystopian America where the government keeps tabs on its people and “recalls” teenagers prone to violent behavior. Recall plays Friday and Saturday evenings at 8 pm and Sunday matinees at 3 pm through May 4 at the Lex Theatre in Hollywood. Tickets are $25.

MUSIC: Record Surplus—one of the largest independent recrod stores on the West Coast—hosts an in-store performance with The Outta Sites at 8 pm. The band’s sound and debut album Shake All Night with The Outta Sites has been compared to the British rock of the 1960s. The store is located on the corner of Santa Monica Boulevard and Centinela Avenue. Free.

BOOK FAIR: Grand Park's Downtown BookFest takes place on Saturday from noon to 5 pm. There are a number of readings and other activities scheduled, including Los Angeles’ best DIY authors creating and selling their work presented by Zinefest; readings of essays about Union Station’s 75th anniversary commissioned by Metro; massive comic book by Ryman Arts; and a customized poem-on-demand by Poesia Para la Gente, among other scheduled events. Free.

FILM + EMPHEMERA: On FridaySaturday, the Velaslavasay Panorama and The Luis Buñuel Film Institute present The Obscure Objects of Luis Buñuel from 7-11 pm at the Velaslavasay Panorama. On view will be objects and ephemera from Buñuel’s life (books from his collection, unproduced scripts, and select photographs), along with the premiere screening of the restored editions of Buñuel and Dali's Un Chien Andalou and the 1933 documentary Land Without Bread. There will be special guests from Buñuel's time in Hollywood doing a Q&A. Tickets: $12 general / $10 VPES members.

MUSIC: Clockwise performs at The Sayers Club in Hollywood in advance of the anticipated EP release. Opening for Clockwise is Floods. Tickets: $30-$1000. Doors at 8 pm with the show at midnight. 21+. RSVP for a spot on the guest list by sending an email to info@clockwisemusic.net or tickets are available for purchase.

NIGHT YOGA: exhale mind body spa in the Fairmont Miramar Hotel & Bungalows in Santa Monica hosts Glow Yoga from 8:30pm to 9:30 pm. The free 60-minute flow yoga class will is open to the public and is being held outdoors under the fig tree at The Fairmont. The lights will be turned off and the class will be held by candlelight to welcome spring. Bring a mat. All levels are welcome.

BEER: Tap, Cheer & Give is a party with a purpose held in Santa Monica on Saturday. The event celebrates locally produced craft beer and music and features cause-supporting brands that are making a positive impact. Held at Cross Campus, the event includes an unlimited sampling of 20+ beers, DJs, 20-minute beer crash courses and gourmet food trucks. Every attendee will be able to select one of the five causes represented at the event to which 10% of their ticket price will be donated. Cost: $35-$45. 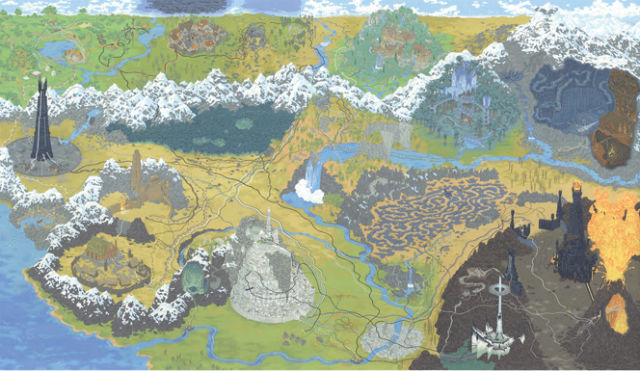 ART: Gallery1988 (East) opens Andrew DeGraff's solo show Cartography, which features maps inspired by The Shining, Wrath of Khan, Princess Bride and more. DeGraff has also created a “larger-than-life map of the Lord of the Rings trilogy.” The artist will be attendance during the Saturday reception from 7-10 pm.

DANCE: The Music Center presents A Taste of Dance: Movie Moves on Saturday from 11 am to 4 pm with $1 dance lessons. Learn iconic steps from fav films like Slumdog Millionaire, Singin’ in the Rain, Dirty Dancing, Pulp Fiction, Flashdance, Footloose, She’s All That, Napoleon Dynamite, Saturday Night Fever and more. Each lesson is 20 minutes long.

ART: UCLA’s Fowler Museum presents the exhibition Sinful Saints and Saintly Sinners at the Margins of the Americas. At 5 pm, there’s a lecture by curator Patrick A. Polk, who discusses sacred figures from Mexico, Brazil, Guatemala, Argentina and the United States that serve as sources for artistic inspiration and devotion. The exhibition and the lecture includes official and unofficial Catholic saints, martyred folk heroes, and even New Orleans’ “Voodoo Queen” Marie Laveau and the “Mexican Robin Hood” Jesús Malverde―and cultural heroes like the Native American deity, Coyote. The exhibition’s opening party follows from 6-9 pm. The exhibition remains on view through July 20.

MUSIC: Monogem holds a release party for its debut single, "Wait and See," on Saturday from 8 pm to midnight at The Holding Co. Special guests: Adam Johan and Charles Alxndr. Free entry with RSVP. Performances start at 10 pm.

MUSIC+ART: Creative Underground Los Angeles presents a night of visual and performing art collaborations at the Blue Whale. With the theme Public Secrets / Secret Publics, the works explore the “increasingly blurry line between public and private in modern society.” The opening reception for the art show begins at 8 pm, and the evening includes sets of new music from bands led by Alexander Noice, Brian Walsh, Eric Clark and Daniel Rosenboom. The music, video, dance and readings start at 9 pm and continue throughout the night. Cover: $15.

DESIGN MARKET: Downtown Modernism, an outdoor marketplace, takes over the Modernica Factory in Vernon on Sunday from 8 am-2 pm, Stretching across five acres, the market specializes in vintage modern design, including furniture, lighting and decor designed by people like Hans Wegner, Eero Saarinen, Charles and Ray Eames, Harry Bertoia and many more. Entrance: $5 for adults and children free.

COMEDY: The Blind Barber Secret Show is the “best comedy show in a speakeasy west of the Mississippi.” The event is by invitation only (you have to be on the guest list to get in). So email barbersecretshow@gmail.com to get on the list. Only then will they tell you where the bar is. The show on Sunday features the comedy of Jimmy Dore, Karl Hess, Emily Maya Mills, among others. 8 pm.

3 Films You Should Catch This Week